The first Black woman to graduate from UVM, Brown eased the path for future generations of students through her scholarship bequest 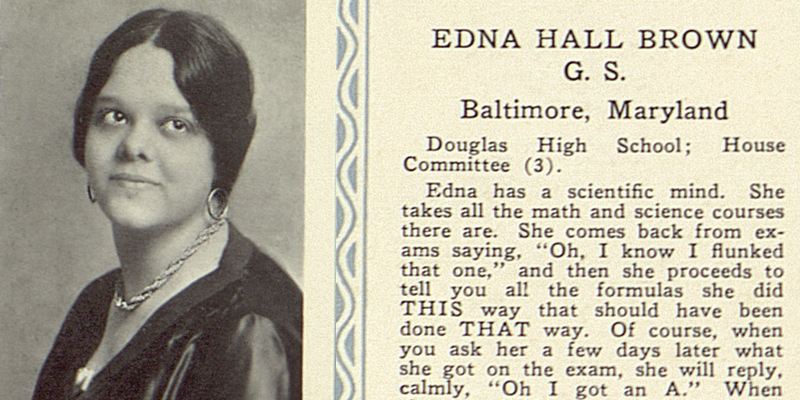 “Here’s a maid from sunny Baltimore. From the way she reads Latin we think they must speak it down there…  She expects to enter U.V.M. next year. We know she’ll make good.”  So reads the St. Johnsbury Academy yearbook entry for Edna Hall Brown, who spent a year at the preparatory school in Vermont’s Northeast Kingdom before enrolling at UVM in 1926. Brown, the first-known Black woman to graduate from UVM, did, indeed, make good.

After capping her standout academic career at UVM with a bachelor of science degree, Brown went on to earn a master’s from the Teachers College at Columbia University in 1932. From there, she returned to her native Baltimore and taught the sciences—especially mathematics and physics—in the public school system until she retired as head of the science department at Dunbar Senior High School in 1970. As a teacher, she remained a rigorous student herself, pursuing additional post-graduate study.

Teaching was not the only way that Brown invested herself in her community. She was active in the historic Madison Avenue Presbyterian Church and a dedicated member of the DuBois Circle for sixty-two years. The DuBois Circle was founded in Baltimore in 1906 as a women’s auxiliary to work alongside DuBois and the members of the local branch of the Niagara Movement in their fight to address the social, political, and economic injustices faced by Black Americans.

Upon her death in 2000, Brown furthered a family tradition of passing on some of her hard-earned wealth to relatives. But she also did something new: she left a large portion of her estate to help minority students go to college. Half of those resources went to the United Negro College Fund, and half came to the University of Vermont, “to be used for their scholarship fund for minority students.” Recognizing the ongoing need for such support, the university used the gift to create the permanent Edna Hall Brown Scholarship Fund, a fitting legacy for this unassuming trailblazer.

“I’m smiling right now knowing that this support came from a woman of color who lived a really wonderful, intelligent, and humble life,” Dizack says. “For me, the funding validated a sense of belonging—somebody actually believed in the values that I hold. Knowing that someone else with similar identities had a similar story and went forward and succeeded—that is so inspiring.”