Learning on the Job. In Class. 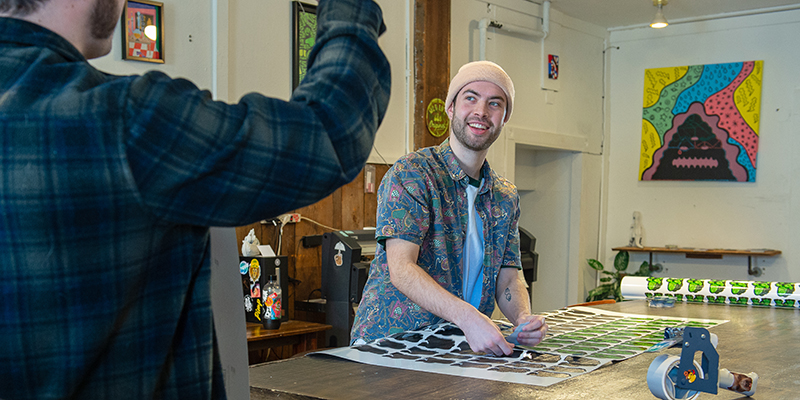 It’s an unlikely setting for a three-credit course: a narrow staircase next to Ahli Baba’s Kabob Shop on Burlington’s Main Street that leads to an open room dominated by a long table.

They aren’t just any stickers, though; Bernier both designed them and oversaw their production, work he performed during a semester-long internship at The Sticky Brand, a Burlington-based creative shop whose roster of 700 clients includes national brands like The North Face and Burton Snowboards.

And it’s not just any internship. Bernier is one of 30 students taking a new course in UVM’s College of Arts and Sciences, AS 190, that’s designed not to land internships for students (though the course can do that, too) but to make sure they get the most out of them.

Bernier and his classmates – Economics, Chemistry, English, Poli Sci and other majors – spend 10 hours a week interning at places like The Sticky Brand, the Echo Museum, the Public Defender's Office, the Lake Champlain Chamber of Commerce, Putumayo World Music and National Life Insurance.

Then, six times a semester, they meet for an hour-and-fifteen- minute class where they talk about the challenges they’re facing, reflect on what they’re learning, relate the internship back to their academic work and pick up practical job search skills.

“We’re processing the internship experience into something that’s more valuable, both in helping students land other internships and, ultimately, in finding a job and setting a career direction,” says Richard Watts, director UVM’s Center for Research on Vermont, the well-connected longtime Vermonter who teaches the course.

It’s worked for Bernier, who was offered a full-time position at The Sticky Brand after he graduates in May, one of several students from the class whose internship supervisors offered them jobs or paid internships.

The course “definitely helped” make him a stronger candidate, he says, pointing to regular assignments Watts makes, like asking students to write up an example of when they took initiative, which often prompts them to do just that.

Alex Gessman – a Political Science major who’s interning at the Lake Champlain Regional Chamber of Commerce, where she raises funds to support innovative start-up companies – says AS 190 has made the internship different from any other she’s had.

“They were kind of the same thing every day; I never put any thought into it,” she says. “Now I think more about the internship; you’re just more aware of everything that goes on.”

Gessman can thank the class for helping her find a career path she’s passionate about, prompted by an exercise that asked students what tasks they liked and would want to do in a job. What she liked most about the internship, she realized, was researching and tracking down companies that were most likely to contribute funds to the start-ups. Now she's looking at careers in "business development and market research because that’s essentially what I did. I loved it."

In addition to encouraging students to look inward, the course has a distinctly practical side, helping them develop strong LinkedIn accounts, buff up their resumes and hone their interviewing and job-search skills.

“Before the class I didn’t have a LinkedIn account and I didn’t see the value of one,” says Arielle Cheifetz, a junior Environmental Studies major who is interning at the Vermont Climate Pledge Coalition, where she recruits new members and keeps current ones engaged.

After a LinkedIn presentation from UVM’s Career Services office, she saw the light. “It was just like, whoa, there’s this whole resource here that I had never thought of ever.”

AS 190, which is offered in the spring, summer and fall – and may expand to more sections in the future –  is part of a larger vision College of Arts and Sciences dean Bill Falls has to make internships widely available to students in the college, which enrolls about half of UVM’s undergraduates.

Falls has also affiliated the college with The Washington Center, a 40-year old program based in the nation’s capital that will make more than 600 internship placements, housing and affiliated courses available to UVM students, and Semester in the City, a similar program in Boston that places students with social-justice organizations.

And at Fall’s direction, the college has created an internship office, managed by Watts and his colleague, Sophia Trigg, that connects students to the many internship resources at the university.

Through the office, Watts and Trigg found internships for about half the students in AS 190, including Cheifetz and Gessman.

For students like Bernier, the class, and the internship, have been invaluable.

He was thrown into the fray from day one, when he was asked to finish a design a co-worker had started.

“It was a little intimidating, because I was working around someone else’s art, but it came out nice. And the client was into it.”

Bernier thinks internships are the best direct route to a job.

“If you’ve shown what you capable of and that you’re a hard worker and you want to be in an industry,” you have a good chance of being hired, he says.

That’s the driving philosophy behind AS-190, Watts says.

“Internship can seem overwhelming, if don’t know where to start,” he says. “We want to take the anxiety out of finding one – and then turn the experience into something that can really get students started on their careers.”