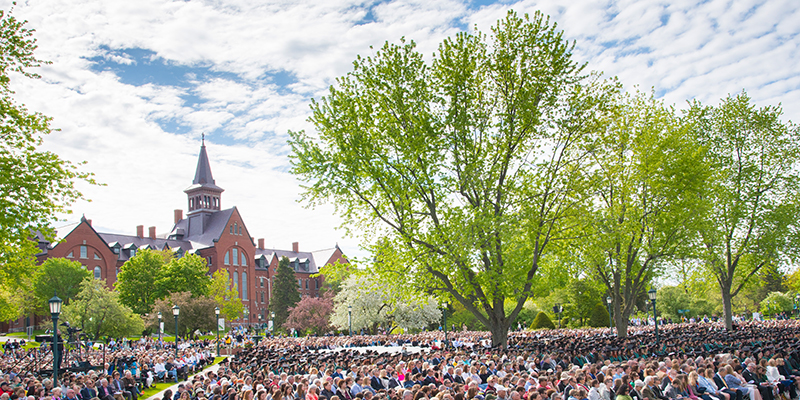 James Fallows, national correspondent for “The Atlantic” and one of the country's leading journalists across more than three decades, delivered the address at the University of Vermont’s 216th commencement ceremony with a call for the graduates to be active participants in American democracy. Vote, run for office, be informed, be engaged, Fallows told the UVM Class of 2017. And Fallows offered some more personal advice, including, “Exercise. Get in the habit of being happy. Get in the habit of being excited.”

On a cool May morning, Fallows spoke from the stage in front of the Waterman Building. Assembled before him across the university green were an estimated 3,228 graduates and thousands more friends, families and faculty. The degree recipients hailed from 40 states and 21 countries.

President Tom Sullivan was among the speakers who preceded Fallows. In his congratulations to the Class of 2017, Sullivan encouraged them to rely on the humanistic grounding of their UVM education to meet the challenges of the digital information revolution as boundaries between the physical and virtual worlds blur. “The fundamental question is how is the revolution shaping you and humanity, and how do you want to shape this future?” Sullivan said.

When James Fallows, whose career includes working as speechwriter for President Jimmy Carter, took the lectern he wasted little time before addressing the turmoil that dominates the headlines and is likely on the minds of those stepping off campus with a freshly printed diploma.

“But what I hope you’ll focus on are the times in which we meet. The times of our 45th president. The times of challenges to liberal democracies and open societies all around the world. The times of contested news, and siloed news, and ‘fake news,’ and ever-emergent real news. Times of imperiled science, when science matters more than ever—of social and economic divisions, as technology both unites us and drives us apart. Of increasingly urgent global threats, starting with sustainability in all forms and extending to disease and disorder and terrorism and migration, at a time of increasingly frayed global ability to focus on what matters and cooperate,” Fallows said.

In the face of such uncertainty, he encouraged the graduates to find comfort and confidence in the fact that, historically, they are far from alone in graduating into turbulent times. Recalling his own college graduation in 1970, Fallows said, “… in those times hundreds of Americans and thousands of Vietnamese were dying each week in combat; and that the world environmental crisis was dawning; and that discrimination forms you would find incredible was still enshrined by custom and law; and that many American cities were literally in flames.

It was a terrible time, which felt more on-the-edge even than the world may do to you now; yet because of social and technological advances that flowed from that era, it was a wonderful time as well.”

Fallows followed that idea back through history — his own father’s “Greatest Generation” emerging from the horrors of World War II or his grandfather’s coming of age in the early 1900s when even a high school diploma was rare, yet it was a time when American innovation flowered.

Drilling down on his theme of challenge and promise, Fallows described what he sees as the greatest challenge of the day. “But national politics and policy — our ability to address collective problems in a reasonable, compromise-minded, fact-based, and future-oriented way — are the major failure of national life right now,” he said.

Finding promise, Fallows said, isn’t hard. Look around you, he told the graduates, look on the local level. The promise in local action is rich in places like Burlington, Vermont, and countless others throughout the nation.

“Local solutions can never fully substitute for national or global approaches. But for now they are what’s possible, and for the long run they are fabric from which larger solutions are woven.”

But none of that progress will happen without the actions of citizens taking the initiative to vote, run for office, be informed and support the independent flow of information with a subscription to a newspaper or magazine. Fallows suggested “The Atlantic, perhaps,” to laughter from the crowd.

“And get in the habit of engagement,” Fallows said in closing. “We are counting on you, and on this day we celebrate what the University of Vermont has done to prepare you, for the service we need from you, starting now.”

In addition to James Fallows, the university presented honorary degrees to:

Diane Greene, UVM Class of 1976, senior vice president of Cloud Computing at Google and a member of the board of directors of Alphabet Inc., Google’s parent company.

Martha Pattee Heath, UVM Class of 1969, a longtime education advocate and public servant as a member of the Vermont State House of Representatives.

Dr. David R. Nalin, a pioneer of oral rehydration therapy, a life-saving remedy for treating patients with cholera and other severe illnesses.

Patrick Wong, who received his doctorate in biochemistry from UVM in 1975 and went on to a career in research that built on his discovery at UVM of a class of lipids now known as prostaglandins in bone and cartilage.