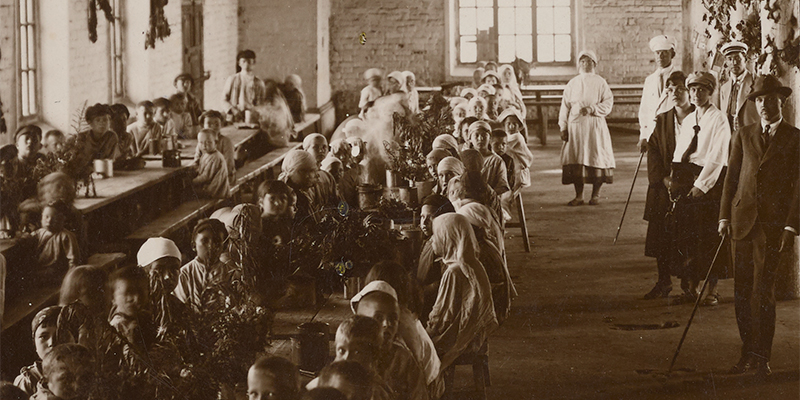 Back in 2010, while conducting research for a book on the fall of the aristocracy during the 1917 Russian Revolution, Douglas Smith ’85 — a Russian historian and author — happened upon some information that both intrigued and puzzled him. It was scrawled in diaries and personal letters written by Moscow’s former elites between 1921 and 1923, a time when they were impoverished and starving.

“They were writing about how the Americans had come to town and — since they could speak English and were fluent in foreign languages — were being hired by the Americans to help with a relief effort. I thought: ‘Well, that's bizarre; I've never even heard of this relief effort. Why is that?’” Smith wondered. Curious, he filed the information away in the back of his mind, intending to return to it someday.

A wing of the Alexander Palace at Tsarskoe Selo, home of Tsar Nicholas II and his family, was converted into an ARA kitchen that fed more than two thousand children a day. The kitchen was run by one of the tsar’s former cooks and several servants of the last Romanovs. (Photo: Courtesy of the Hoover Institution Library and Archive, Stanford University)

Six years and two books later, Smith finally followed up on the mysterious relief effort. Worth the wait, he was “just totally blown away” by what he found: a two-year mission by the United States in the Soviet Union to save some 30 million people from starvation — the biggest humanitarian effort of its time — which had been subsequently all but erased from history less than 100 years later. His recent book “The Russian Job: The Forgotten Story of How America Saved the Soviet Union from Ruin” details the largely untold story about the massive undertaking led by then-Secretary of Commerce Herbert Hoover and the American Relief Administration.

“It's not our military might and it's not the strength of our economy that has made America, in many ways, a fascinating and marvelous country, but it's the incredible charity and humanitarianism that we have shown at various moments,” Smith says. “I'd hope that by reading this, it may instill in people today this notion that we do have an obligation to help when we can.”

At the height of the famine, Smith estimates that 11 million Soviets were fed by the U.S. each day and that the crisis claimed roughly 6 million lives by its end. Cannibalism was not uncommon, particularly among those in the most devastated villages, where peasants went so far as to exhume and consume fresh corpses from graves and mothers spared families from watching children starve by abridging their inevitable deaths.

Children kneel in gratitude at the arrival of American corn in the Samara village of Vasilevka on April 10, 1922. (Photo: Courtesy of the Hoover Institution Library and Archive, Stanford University)

But with no more than $60 million and 200 aids deployed at any given time, the U.S. was able to cover more than one million square miles of territory suffering from severe drought and fallout of Vladimir Lenin’s revolution. American aids hired roughly 125,000 Soviets across the country to translate and disperse supplies.

“In terms of the dollar amount and in terms of the number of American men involved, it was actually a shoestring operation. But in terms of its scale, scope and the number of people it was feeding, it was enormous. This was the biggest ever in history at the height of the mission; it was huge,” Smith says. So why don’t most people know about it?

On Russia’s end, “the Soviet government was profoundly ashamed that they needed the help of capitalist America” to prevent collapse following their 1917 revolution to communism, the author explains. “And as far as the United States goes, I think it chiefly has to do with the fact that Herbert Hoover's reputation was largely in tatters during his presidency.” His role in the Great Depression was followed shortly after by Soviet tension during the Cold War. “We as a country did not want to be reminded of the fact that we had worked in helping them stabilize their government through this famine relief effort,” he says.

Smith’s book, named one of the Best History Books of 2019 by the “Financial Times,” follows the accounts of four real American men who transcribed their various efforts across the Soviet Union in personal letters back home and diaries. It paints the bigger picture of the tragedy and impressive mission alongside the men’s personal encounters with bandits, grueling sights and horrors, love stories and brushes with typhus and other famine-related diseases. In fact, Smith even toyed with the idea of writing the book as a story complete with characters, plot and narrators. “But then the more I was reading about the famine and about the horrors, I knew that if I did this as a novel, people would not believe me. They would think I was exaggerating for dramatic effect,” he says.

All’s well that ends well, though, as Smith believes no fictional character could have championed the groundbreaking operation better than one who spearheaded it in reality. “Hoover himself said it best. He said: ‘I don't care what the political system may be in any given country, if there are people starving and we have the resources to help ease their suffering and to save lives, we have a moral obligation to do that.’”