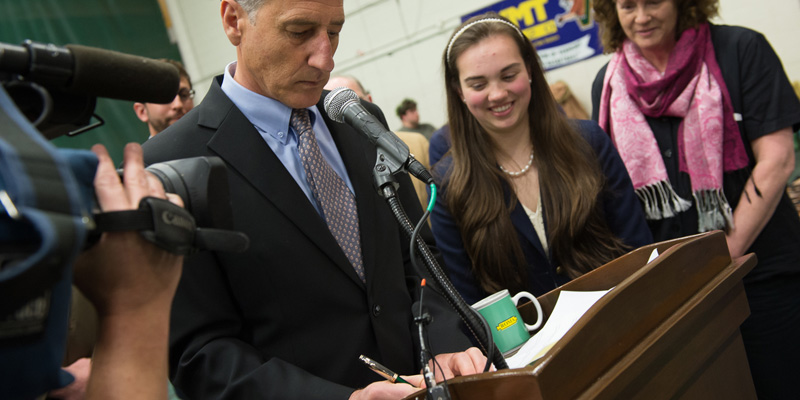 With close to a thousand Vermont middle and high school kids donning togas, acting out skits in Latin and squaring off in Scholars-Bowl-like competitions, UVM’s annual Latin Day is usually good for a story or two in the Vermont media.

But the 2015 edition, which took place April 10, was different. The toga-clad kids were there en masse, as usual, but so was a small army of Vermont’s finest print and broadcast journalists.

They were attracted by a truly momentous development: Gov. Peter Shumlin made an appearance at noon to sign into law Vermont’s new Latin motto, with its author, ninth grader Angela Kubicke, at his side.

Kubicke had penned the motto -- Stella quarta decima fulgeat (May the fourteenth star shine bright) – innocently enough last year when she was a student at the Riverside School in Lyndonville. She submitted it to her state senator, Joe Benning, who began the process of making it law.

Some months later, after a local TV station posted the motto on its website and asked for comments, all heck broke loose. A few Vermonters, mistaking the motto for Spanish, voiced their disapproval in strong terms of what they saw as un-American immigrant coddling. The story caught the attention of the national media, the critics were roundly ridiculed, order was restored, and Kubicke emerged as a kind of hero and poster child for the virtues of education.

Gov. Shumlin lauded her initiative and pluck in his remarks. “I want to say to Angela, ‘Thank you for having the courage of your convictions, the imagination and the strength to carry out what you think is right.’ I'm proud as governor and I know Sen. Benning is proud as a senator to join you in carrying out your mission.”

Mark Usher, chair of the Classics Department, which sponsors Latin Day, couldn’t have been happier that the event – designed to showcase Latin programs in Vermont schools and encourage more to adopt them – was getting such love from the media.

The motto flap was all for the good, he said. “There’s nothing like a good misunderstanding to clarify something. The whole immigration business only helped our efforts to bring more attention to what Latin actually is and what classics can do for us.”

Kubicke’s take? “It's super exciting. I kind of thought it was going to pass, but I never thought it would turn into something like this. Getting it signed by the governor on Latin Day," which she has attended regularly, "is so fun.”

After his speech, the governor signed a proclamation, which Kubicke read aloud, recognizing April 5 through April 12 as Latin Week in Vermont.

In his remarks introducing the governor, Sen. Benning, wearing a laurel wreath on his head, praised Kubicke and underscored the historic resonance of the motto she created, which incorporates an inscription from an 18th century Vermont coin.