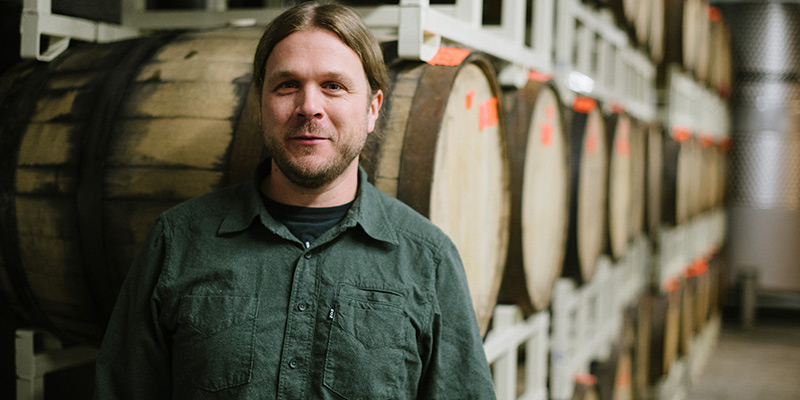 Product development and quality control are key focuses for Bryan Holmes, who earned his doctorate in chemistry at UVM and is one of Citizen Cider's founders and owners. (Photo: Andy Duback)

The mile-long stretch of Pine Street in the city’s South End, a hotbed of entrepreneurialism at home in a historic industrial neighborhood, includes a number of Burlington’s economic success stories. Where once Maypo cereal was made, now solar power systems are designed; where once brush fibers were manufactured, now websites for car dealers are created; where once brochures and books rolled off printing presses, now gourmet chocolates are produced and packaged with care. And in a space adjacent to a 19th-century furniture factory, Burlington’s oldest industrial space, a UVM alumnus, his two business partners, and a growing team of employees are helping redefine hard apple cider from homespun to hip, elbowing a place at the bar beside craft beers.

“There is this growing culture of fermentation here that is pretty interesting and fun,” Citizen Cider’s Bryan Holmes G’07 says. For a moment it’s unclear whether the analytical chemistry Ph.D. is speaking literally or metaphorically regarding the innovative area that is also the city’s semi-official arts district. Then he mentions collaborative work with Zero Gravity Brewery, a half-mile to the south, and it’s clear that we are talking beverage science.

Finding Bryan Holmes at work offers a rapid reverse journey through the Citizen Cider process. Walk into the rustic/industrial-cool tasting room, CC’s signature products behind the bar, and ask the bartender for Bryan. He sends you down a short hallway with a window view of the production, bottling and canning areas, twin rows of towering steel vats. Take a left to find Holmes in a small windowless space, something between an office and a chemistry lab. Beakers and flasks and various devices for chemical analysis line shelves and a table top. Later, as I snap a few pictures, Holmes asks me to steer clear of a white board covered with ideas, experimental results, recipes for what might be the next Citizen Cider variety. “It’s a pretty competitive industry,” he says in apology.

While studying for his doctorate under the guidance of chemistry professor Giuseppe Petruccci, Holmes initially considered his own academic career path. But his interests began to lean toward working in research and development or with a start-up. He got a taste of that world through a collaborative project with Sandy Wurthmann, senior lecturer in organic chemistry, that endeavored to devise a better chemical process for turning fats and oils into biofuels. They recently obtained patents for their process, which they hope to sell.

Citizen Cider’s roots are classic start-up — friends experimenting with a passion on evenings and weekends while they held down other jobs. Holmes worked by day developing biochemical sensors for medical diagnostics with Vermont firm QuantaSpec. By night, he and fellow founders Justin Heilenbach and Kris Nelson were learning the ways of cider fermentation in Holmes’ basement.

“In the early days, I was developing the recipe and a lot of the process steps, and just learning,” Holmes says. A childhood friend, now the head of Appalachian State University’s fermentation science department, fielded many calls from Holmes asking about matters like measuring sulfites, repitching yeast, and why that carboy wasn’t boiling. “Lots of trial and error,” Holmes says.

Indeed. But they were soon onto something, selling out their small batches, gaining fans and spreading the word. Founded in 2010, Citizen Cider’s products now reach a good deal of the Northeast — parts of New York, Rhode Island, Connecticut, Massachusetts — with some satellite distributors afar in North Carolina and Chicago. Holmes says covering the New England market is the next goal, moving into Maine, careful growth without spreading themselves too thin.

As the operation has grown to 40-some employees, a number of Holmes’s fellow alumni have joined the team. Jenna Dufford ’13 is among them. A nutrition/food sciences major, she joined Citizen’s production team not long after graduation and is now a production manager.

Though the early days of the business demanded all hands on all tasks at times, the three partners now divide the leadership according to their talents. For Holmes that means heading up product development and managing the analytical lab, quality analysis and control.

That early sense of experimentation continues to drive them forward with four core varieties in cans and a bottled, ever-changing Cellar Series blazing new directions in hard cider. “We find the more experiments, the better,” Holmes says. “Often, things happen by accident or sometimes you capitalize on problems.” Discussing one of their varieties that has really caught hold, Holmes says, “The Dirty Mayor is a beast.” He describes the scene at tasting events when guests walk up to him with a certain focused look. I say, “You want a Dirty Mayor, don’t you?”

Citizen Cider is a proudly Vermont product, made from 100 percent local apples from Vermont and New York, marketing themselves with bold “Drink Vermont” graphics. Holmes says that sense of integration with place is important to the business, from working with regional orchards to projects with Lake Champlain Chocolates down the street or Smugglers’ Notch Distillery in Jeffersonville. “There is a sense that we are all really tied together. We are all making this state work,” he says. “In general, the sentiment for us is if they’re doing well, we’re doing well, let’s collaborate.”