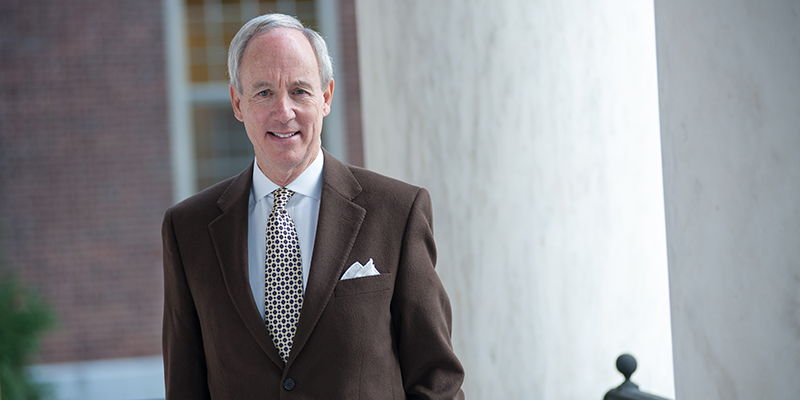 As president of the ABF, Sullivan will supervise efforts in fundraising and, in conjunction with the ABF board of directors, provide oversight to the foundation’s empirical and interdisciplinary research and programing. ABF research projects are of unmatched scale and quality focusing on the most pressing issues facing the legal system in the United States and the world.

“It is with great honor that the ABF welcomes Tom Sullivan as our new board president. His longstanding support of the ABF and expertise in higher education administration make him an excellent President of the Board of Directors to help lead research that matters,” ABF executive director Ajay Mehrotra said.

“After several years on the Board, I am pleased to serve the ABF in the role of the president of the Board of Directors,” Sullivan said. “The goal of the Board is to support and enhance the reputation and status of the ABF, a premier empirical research center on law and social policy.”

Sullivan served as UVM president from 2012 to 2019. During his tenure he oversaw a capital campaign that exceeded its $500 million goal by $81 million.

Sullivan has authored 13 books and over 50 articles and is a nationally recognized authority on antitrust law, complex litigation, and constitutional law. Sullivan has been an elected member of the American Law Institute (ALI) since 1984 and a Fellow of the American Bar Foundation since 1994. He is also a Life Fellow member of the Cambridge University Clare Hall College (UK).

Sullivan has served as board member, chair, co-chair and consultant in various organizations and public services. Most notably, he has been a consultant to the U.S Senate Judiciary Committee on judicial nominations to the Supreme Court, and to the U.S Senate Commerce Committee on mergers. In addition, Sullivan chaired the American Bar Association (ABA) Section of Legal Education and the Association of American Law Schools Section on Antitrust and Economic Regulation. In 2015, he received the ABA’s Robert J. Kutak Award for his contributions to the legal academy, the bench, and the bar. In 2003, he received the J. William Elwin, Jr. Award for leadership and contributions to law school development from the ABA.