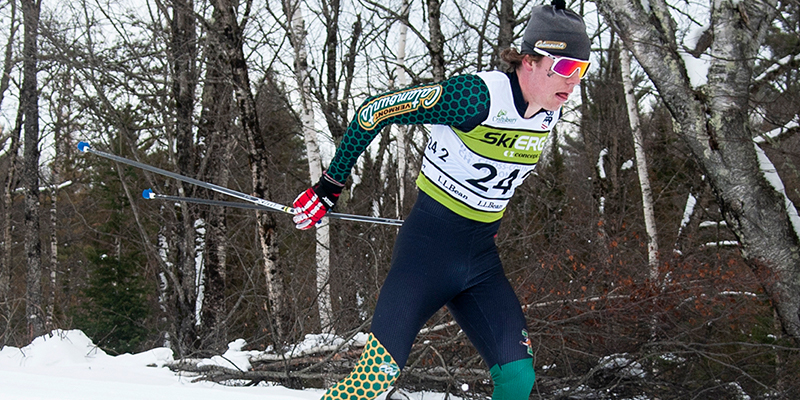 Ben Ogden loves engines. “Jet engines, diesel engines, gas engines,” he says. “They’re fascinating.” Last fall, in a two-semester thermodynamics class, he studied “all the math, calculating power outputs, and a lot of theory,” the engineering major says. “But this semester it’s applied thermodynamics and we’re learning how all the math applies in the real world, to real engines—which I love.”

In another course he’s taking this spring, the Mechanics of Solids, Ogden finds himself thinking about his skis. “I can’t help but to think how they’re made. I know a lot about the construction of skis, especially skate skis, and it’s great to have a class about how different materials deform under pressure.”

This week, he had another chance to test his skills in applied thermodynamics, the mechanics of skis, and what happens under pressure—skiing in the NCAA National Skiing Championships. On Thursday, in Bozeman, Montana, Ogden took the gold in the ten-kilometer freestyle race in a time of 23:50, winning by three seconds.

A few hours later, the remainder of the skiing championship—as well as all remaining winter and spring NCAA championships—were cancelled in response to the growing COVID-19 public health threat. 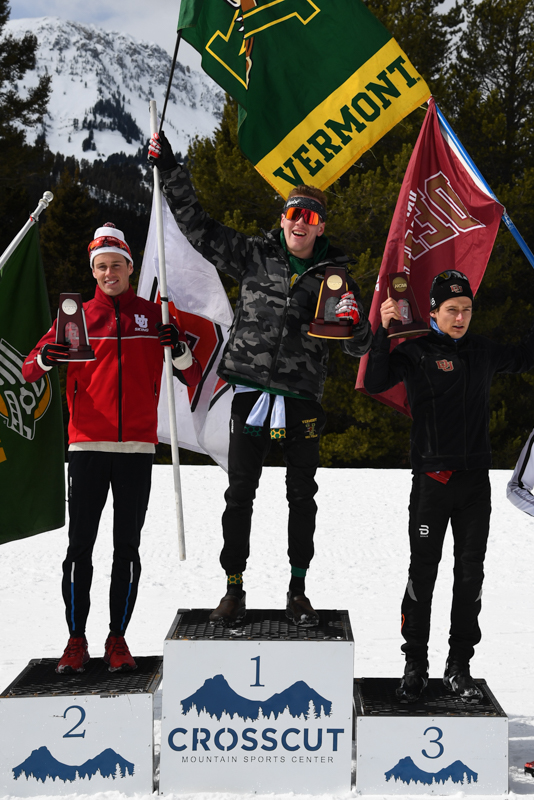 Last week, Ogden was taking some tough exams—in Germany. He was there training and racing with the U.S. Ski Team. “I’m on the U.S. D Team—which stands for development—it’s an under-23 team,” he explains, that allows him to both compete for UVM most of the season and the national team as well. One of the academic exams was in thermodynamics—issued by his UVM professor, William Louisos, and proctored by one of Ogden’s U.S. coaches. “It was really challenging, but I did well,” he says.

“I appreciate the challenge of engineering. That’s, honestly, a major draw for me,” Ogden says. “It's not easy and it forces me to push myself every day in school. A lot of times it’s incredibly frustrating and I have to kick myself to get through it—but then I look back at what I was doing at the beginning of the semester that was really hard and now it’s no problem—which I find immensely satisfying.”

The other test was a series of races against many of the best young skiers in the world. Ogden fared well in several individual races and was part of the men’s 4x5 kilometer relay that won gold, defending their title in the Junior Cross Country World Championships by finishing 35 seconds ahead of Canada.

Like a well-trained engineer, Ogden approaches the problem of racing fast with a clear goal and a flexible set of tools. “We’ve got a great UVM team and what I want to do is just ski as hard as I can and leave it all on the course—whether I feel good, bad or horrible,” he says.

Last year, in the 20K race at NCAA’s—held at Vermont’s Trapp Family Lodge—Ogden was just a freshman and he was sick. He got himself into the lead pack, but “I was hanging on for dear life!” he recalls.  Still, he stuck to the back of the front—for an eighth-place finish.

“You never know what's going to happen,” in a rece, he says, “you have to read the field.” In a mass start race—where everyone begins at the same time, instead of the solo effort of a time trial like his victorious 10k—Ogden often likes to go out aggressively and push over the top of every hill. “Think about how it works,” he said. “If I'm at the front of the pack and accelerate over a hill and into a downhill, then I only have to accelerate for maybe, like, five seconds, but someone farther back in the pack has to accelerate up the entire hill and then over the top—if they want to stay up.”

On the other hand, getting carried away too early can blow the race. “So I can totally see myself just camping out and waiting. I don't know the Western skiers very well, so I'll definitely want to pay close attention. I'll mix it up at the front and maybe pull some tricks out of my sleeve. But no matter what, I just want to let the race unfold, and adjust to what the other guys are doing.” Some of Ogden’s professors might call this adaptive engineering.

Ben Ogden grew up in the village of Landgrove, Vt., population 154. His father skied for Middlebury College where his younger sister, Charlotte, is now a nationally competitive Nordic skier; his older sister Katharine is a three-time NCAA national champion in Nordic skiing for Dartmouth College. “We’re a big ski family, for sure,” Ogden says.

And Trapp Family Lodge is still one of his favorite places to ski. “Even though I have lived in Vermont my entire life, I always love seeing the sap buckets on the trees and all the maples in the woods,” Ogden says. “And the racing there is great—up and down with old-school, tight fast corners on the downhill, which keeps everybody on their toes.”

And after college? “I do want to take a crack at a professional skiing,” says Ogden, who credits UVM Nordic coach Patrick Weaver—two-time national champion and former Olympian—with helping him to build a strong training plan and to dream big. “The Olympics are coming up in two years. That’s the dream,” Ogden says. And then he seems to correct himself. “That’s the reach goal,” he says.

And beyond that? Ogden is not sure. His skis are made by Madshus and he knows another young skier, who studied engineering, that the company hired to work on new skate ski designs. “That's the type of thing that I would love to do,” Odgen says, “to really get my hands dirty and design things.”

Joshua E. Brown
Engineering is not easy and it forces me to push myself everyday. But it's immensely satisfying. —Ben Ogden '22