Enemy of the People

Alumnus tells story of newspaper that dared to defy Hitler 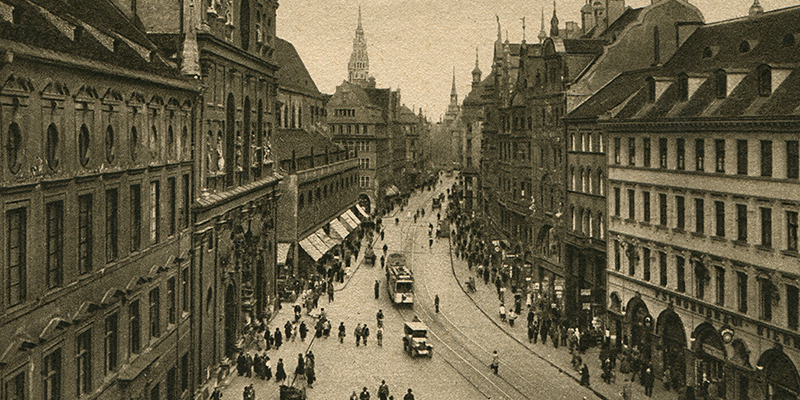 Munich circa 1920. In "Enemy of the People: The Munich Post and the Journalists Who Opposed Hitler," journalist Terrence Petty ’74 takes a closer look at the years that preceded the Third Reich. “As a journalist, I was trying to understand how different the news media landscape was in the 1920s and 1930s,” Petty says. “And I wanted to understand how a democracy failed.” (Photo: Kohl-Illustration/Alamy Stock Photo)

Journalists write “the first rough draft of history,” says a well-worn truth. Reporting and rapping out some of those first drafts was the day-to-day for alumnus Terrence Petty, Class of 1974, as an Associated Press correspondent based in Germany during the dramatic political shifts of the late 1980s. From the fall of the Berlin Wall to democratic revolutions in Eastern European countries such as Hungary and Czechoslovakia, Petty says there was a distinct adrenaline rush to covering the breaking news in that time and place.

The duty abroad was the realization of a dream for Petty, whose interest in Germany traces all the way back to a childhood fascination, growing up in Fair Haven, Vermont, with the state’s Revolutionary War history and the German mercenaries who fought in the Lake Champlain region. In college, Germany would be a particular area of focus as a UVM history major.

Petty retired from his journalism career in 2017, having spent the previous eighteen years managing the AP’s news operation in Oregon. Living in Portland with his wife, Christina, and son, Tristan, the seasoned newsman has shifted his focus to diving deep on research and writing history’s later drafts in long form. His recent book, "Enemy of the People: The Munich Post and the Journalists Who Opposed Hitler," was published in print by The Associated Press in 2019, and a condensed version is available on Kindle.

The project sprang from Petty’s interest in the years that preceded the Third Reich, the social, economic, and political circumstances of the Weimar Republic that led to Adolf Hitler’s rise to power. The Munich Post was a small paper, circulation 15,000, with a decidedly socialist slant. Its editors were fearless in writing investigative pieces that exposed the brutality and corruption of Hitler’s circle and unfettered in pushing the boundaries on journalistic standards with lurid or sensational stories. For readers, knowing the looming horror of Nazi Germany makes Petty’s book all the more compelling, as the Post keeps the presses rolling through threats, physical attacks, and multiple libel cases upheld by Nazi-friendly judges.

“As a journalist, I was trying to understand how different the news media landscape was in the 1920s and 1930s,” Petty says. “And I wanted to understand how a democracy failed. Why did people not listen to journalists like those at the Munich Post who were warning for about a decade regarding the dangers of this guy Adolf Hitler?”

The phrase “enemy of the people” has a haunting ring, of course, in contemporary America, where President Donald Trump demonizes the media daily. Petty notes that echo inevitably comes up in questions after he gives a reading or talk about his research.

“There are some very chilling parallels,” Petty says. Though he cautions against comparing different political eras and countries, some of the parallels lead him back to one of the fundamental premises of his book—what causes a democracy to fail? “Are there any freedoms that Americans would be willing to give up for whatever they would receive in return?” Petty wonders. “That’s the question that is still hanging in my mind.”

Now at work on a new book about post-war West Germany, Petty says he’s motivated to sit down at his desk early every morning by a fundamental drive for a writer/historian. “There are so many nuances in history, really interesting stories, that may have been lost or never told. If I find them intriguing, I think other people will as well. I don’t want these things to be forgotten.”