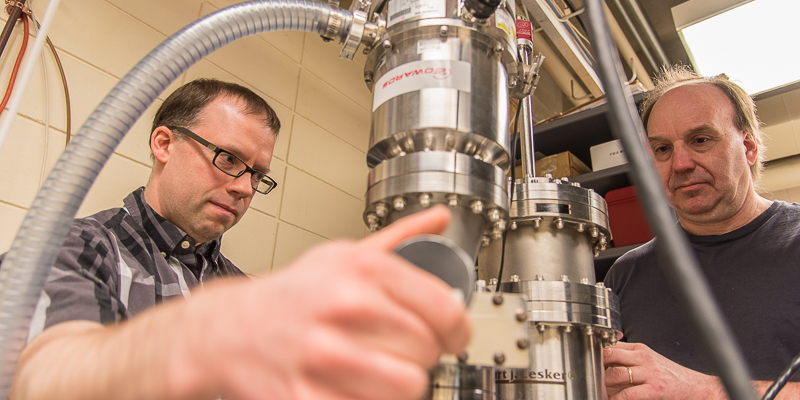 Graduate student Jeff Ulbrandt and physicist Randy Headrick have discovered a novel way to mix X-rays—opening a new window onto atoms in motion. Using this UVM vacuum chamber, they created thin films like those used in solar panels and LCD screens—while shining X-rays on them at the Argonne National Laboratory. Within their gigabytes of data, the scientists found an unprecedented view of the messy motion of complex objects at the nanoscale. (Photo: Joshua Brown)

X-rays have long been used to make pictures of tiny objects, even single atoms. Now a team of scientists has discovered a new use for X-rays at the atomic scale: using them like a radar gun to measure the motion and velocity of complex and messy groups of atoms.

“It’s a bit like a police speed trap — for atomic and nanoscale defects,” says Randall Headrick, a professor of physics at the University of Vermont who led the research team. The new technique was reported on March 28 in the journal Nature Physics.

X-rays have great power to look within. It's not just Superman; scientists have been pushing closer to what might seem like science fiction, training X-rays onto tiny objects, including chains of DNA, viruses, and individual atoms. But as they probe the structure of ever-smaller things, the random arrangement of those objects makes it increasingly difficult to distinguish between them. A long-standing problem has been that good X-ray pictures require nearly perfect crystals—identical objects in precise order. At the scale of atoms, complex and disordered objects — like the thin films that are used to make the screen on a cell phone or the metal layers used in electronic circuits — give a blurry X-ray picture. "It's like blending many different faces in a composite image," Headrick says, "or trying to see what an average car looks like by watching traffic zip along a highway."

In a new approach, Headrick and the other scientists, with support from the U.S. Department of Energy, impose order on the X-rays when there isn't order in what they're looking at. They used coherent X-rays (think X-rays travelling in a marching band) to recover some of the information from their picture. Rather like radar picks out an individual's speed on the highway, they fished out the distinct speeds of small groups of atoms from the bulk X-ray signal they were shining onto a stream of atoms in motion. And in that new kind of X-ray image, they discovered voids and tiny pores that form when making two kinds of thin films with silicon and tungsten — and how those voids and pores move.

But far more important, Headrick notes, the research opens a new way to view many kinds of complex clumps of atoms in motion, not just tidy crystals.

“We can see these nanoscale defects form in the film while they are being made,” Headrick says. The scientists were surprised that they were able to create a view not just of the surface roughness of the film, but also the interior structure. This is important since the quality of thin films can be strongly affected by the dynamic relationship between how they are growing at the surface — often being sprayed or deposited in a vacuum — and the structure of atoms forming beneath the surface.

To understand these two kinds of defects, pour yourself a glass of beer and watch the bubbles. Some move in thin lines through the liquid, traveling up while the top of the beer also rises. Other bubbles, trapped in the foamy head, are stuck in place while more foam piles on top of them.

Now imagine that these bubbles are actually single atoms. The lines of bubbles that move up while the beer is being poured are like the nanocolumns of atoms Headrick and the team observed with the new X-ray technique. The voids in the film are like the bubbles trapped in the beer foam.

The lead author on the paper is Headrick's graduate student, Jeffrey Ulbrandt. Together, they collaborated with researchers from Boston University, including physicist Karl Ludwig, and scientists at the Argonne National Laboratory, to make the discovery. Using a large machine called a synchrotron at Argonne's Advanced Photon Source, they were able to direct highly organized waves of X-rays onto the films. Imaged with these coherent X-rays, disordered objects — like the rough surface and jumbled interior of a silicon film — can be sensed in a complex pattern of speckles that is made on the X-ray detector. “This speckle pattern contains detailed information on the shapes and spacings of the collection of objects,” Headrick explains.

These coherent X-rays can also sense motion, tracking jiggling and swarming groups of atoms that are moving independently and erratically. The new study pushes that realization forward. The scientists took a scattered wave of X-rays bouncing off the rough surface of the thin film being deposited in a vacuum chamber — and mixed it with a scattered wave of X-rays coming off the disordered defects — the nanocolumns and voids — forming at and beneath the film’s surface.

These two mixed waves work a bit like a radar gun. The waves from the surface form a speed reference — while the subsurface waves form a much smaller signal mixed into this reference wave. The scientists looked at the speckled pattern from X-rays scattering off the growing surface of the thin films, getting thicker at a known rate. Then they measured how this speckled pattern oscillated when interacting with the X-rays bouncing off the defects and interior. These oscillations (“like a vibrating tuning fork,” Headrick says) are caused by atoms going different speeds — which gave the team a sensitive measure of the relative velocities of atoms in motion. But instead of 55 mph, the thin film surface grows up at a few Angstroms per second. Some of the defects grow with it, while others get left in the nanodust.

“This is a new X-ray effect,” Randy Headrick says, “that lets us sense disordered matter in motion — at the atomic scale.” 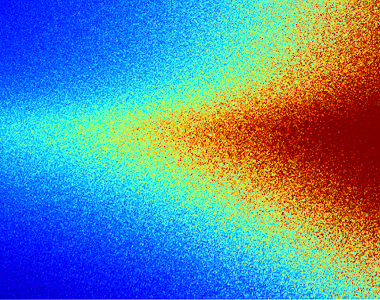 A beam of X-rays scattering off a thin film of silicon form this speckle pattern that corresponds to the details of the surface. (Image: courtesy Randy Headrick)