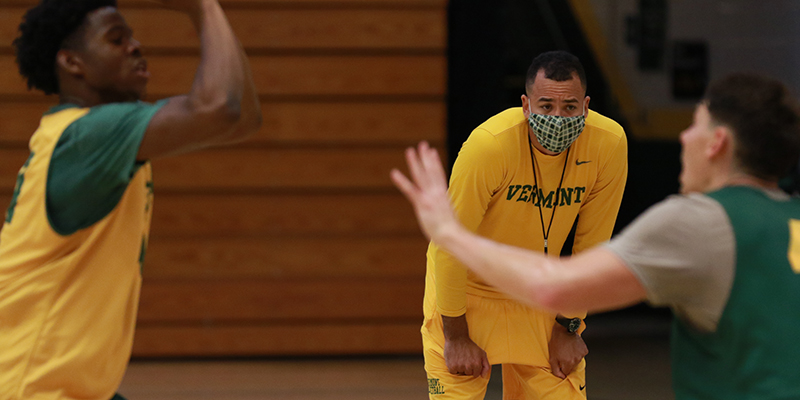 Hamlet Tibbs, assistant men’s basketball coach, juggles many roles with the program — scouting, recruiting, on-court coaching and working with “the bigs,” particularly forwards. Also essential within all of that, building relationships with the players and helping them grow not just as athletes, but as individuals.

Tibbs’ own quest for personal growth and that of the athletes he works with were among his motivations for signing on with the new Coaching 4 Change (C4C) effort this summer. The initiative, led by Carmen Maciarello, head men’s basketball coach at Siena College, was inspired by the deaths of George Floyd and Breonna Taylor. C4C unites more than 100 college basketball coaches to engage, empower and educate student-athletes on issues of social injustice and systemic racism.

“For me, personally, I just want to be able to continue to evolve as a coach, as a person, continue to educate myself on these social issues, so I can educate our student-athletes, be there to support them through their struggle and what they’re going through,” Tibbs says.

Tibbs remembers his time at WVU as among the best years of his life, as the Mountaineers went to the NCAA Tournament’s Elite Eight in 2005 and Sweet Sixteen in 2006. (College basketball fans might remember the name Kevin Pittsnogle, a big guy with a funny name and a dead-eye with the baseline jumper, from those teams. Tibbs remembers rebounding for him in practices: “He was a sniper.”)

Returning to Upstate New York post-graduation, Tibbs coached at Albany Academy and with the AAU Albany Rocks squad before Becker hired him to join his staff.

At UVM, Tibbs has been a member of the Athletics Inclusive Excellence Committee, work that he notes is a natural mesh with C4C. With common goals, he can bridge ideas and initiatives between the two groups. Among the goals upon which C4C places particular importance, one is particularly apt at the moment: teaching the power of voting to advance equality. With pride, Tibbs notes that more than 60 of the programs involved with C4C have 100 percent of their players registered to vote.