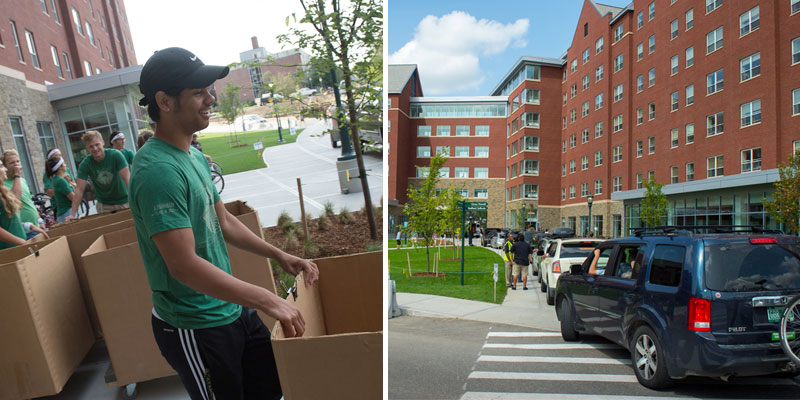 Campus hummed Aug. 25, as the Class of 2021 arrived to begin their UVM journey. Among the largest, most academically talented, and diverse classes in UVM history, the students were greeted, as always, by the UVM Welcome Crew – faculty, staff and fellow students who help make the moving part of move-in day a little easier on families.

As students settled into their new homes – including UVM’s brand new Central Campus Residence Hall – we met up with a few of them to learn a little more about the Class of 2021. Read their stories: 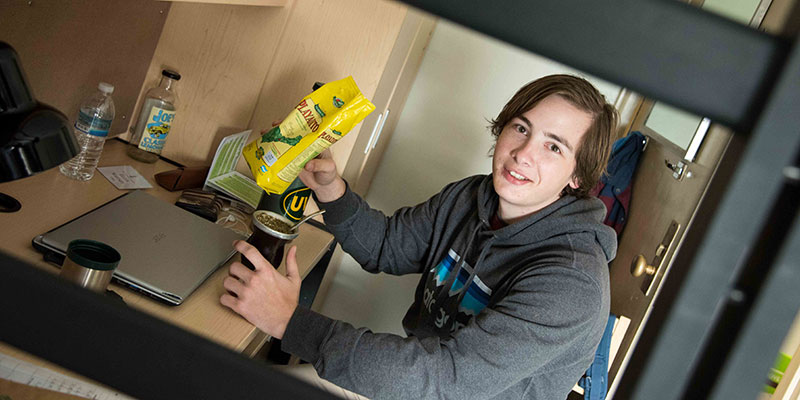 Soybeans, wheat, sunflowers, corn—these are some of the crops that Elias Whitney’s family grows on the 4,000 acre farm in Necochea, Argentina, where he grew up. Now he's a first-year student at UVM, “and I hope to study ecological agriculture,” he says. He's brought with him several large sacks of yerba mate, a traditional tea-like drink of his nation. “Argentina has a huge problem with industrial crops, with tons of herbicides and pesticides,” he says, “I came to UVM because of all of the great courses in environmental sciences—and I really like hiking.” He drinks several thermoses of mate “every day,” pouring hot water over the dried plants and sipping it with a metal straw. After college, he plans to return to his farm, "to use what I've learned." 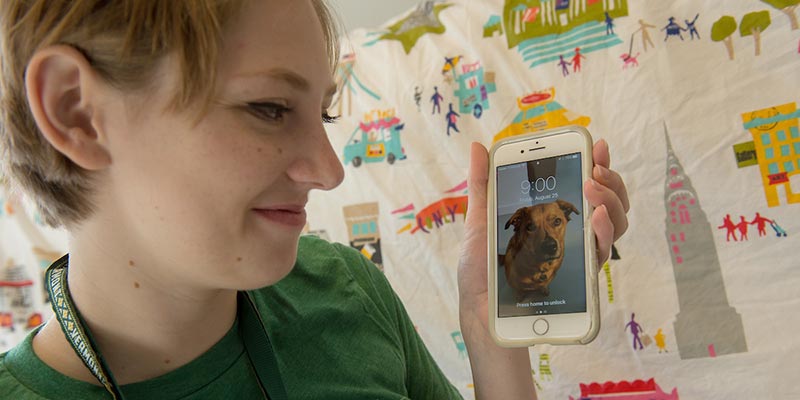 Ask Sean Hanke about their major and the answer is quick and definitive — linguistic anthropology, possible French minor. Love of language has been a constant in their life, study of Chinese, French, American Sign Language. A gap year before enrolling in UVM this semester took them across most of Europe, Sweden to Italy. On the road for some fourteen weeks in all, their travel budget was built upon jobs working at a Texas Roadhouse restaurant and a local movie theater in hometown Amherst, Mass. Now happily at home in the Wellness Environment, Central Campus Residence Hall, there’s one thing they really miss from home. Hanke shows us the screensaver on their phone, beloved dog Cleat. 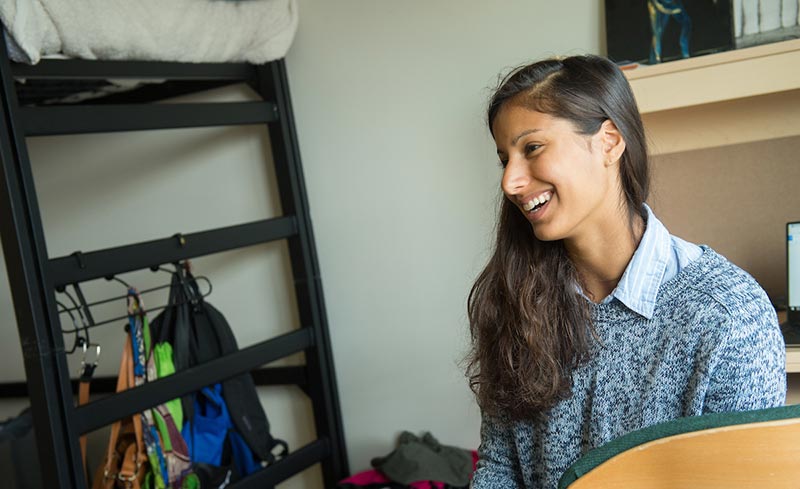 Indira Kulkarni’s room in the Honors College at University Heights North is still spare and mostly without decoration as she awaits the arrival of her roommate. There’s a post-Wilderness-TREK-soaked bag of clothes and boots on the floor that Kulkarni jokes is “quarantined” until she can get them in the wash. Her TREK group hiked the Long Trail from Camel’s Hump to Lincoln Gap, spending a memorable night in the Stark’s Nest Hut when a storm blew through. Kulkarni, who will major in neuroscience, says she was drawn to UVM by the Honors College community and opportunities to deepen her studies via experience at the UVM Medical Center. Kulkarni’s parents, a nurse and a doctor in the Poughkeepsie, New York, area have sudden-onset empty nest this week as Indira leaves UVM a week after her twin brother enrolled at Bucknell. “I think mom is OK. She cried it out when she dropped me off for TREK,” Kulkarni says. 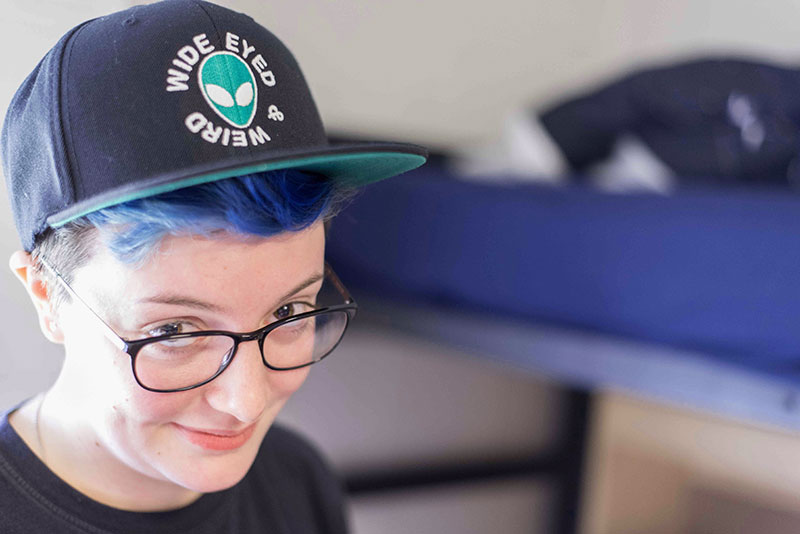 Arianne Conde likes to help her mom in the garden, read sci-fi novels (Red Rising and Inkheart are favs), and “I love to draw and sketch; I’m into watercolor now,” she says. She once thought about being an astronomer, but now her academic interests have returned to Earth: “I’m going to study environmental engineering,” she says. Her senior project last year explored “eco-friendly houses in Vermont,” she says. “I’d like to have job to make houses more sustainable. There are a lot of buildings in the world that could be more green.” The top student at Whitcomb High School, in Bethel, Vermont, Conde received a Green & Gold Scholarship—a full-tuition award to attend UVM. “My friends all call me wide-eyed and weird,” she says with a smile, donning an eponymous hat, “but it turns out everybody is little weird.” 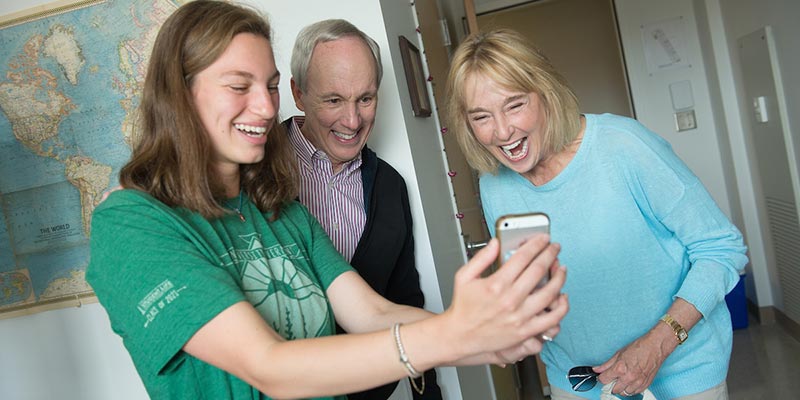 Shortly before Tom and Leslie Sullivan crossed campus to meet and greet new students on Friday morning, President Sullivan wrote an email reply to David Saltzman, the father of an incoming student who had written him with kind words regarding the president’s comments on Vermont Public Radio, heard as the family drove into town with daughter Penny. Lo and behold, as the Sullivans walked the halls of the new residence hall welcoming new students they came upon… wait for it… Penny Saltzman. Surprise and laughter at the coincidence led to Penny offering to call her father: “Hey, Dad, I have to tell you something.” She then put her father David, mom Stacey, and sister Jolie on Facetime with the Sullivans. “Thank you for sharing your family with our UVM family,” President Sullivan said. “We’ll take real good care of her.” As they parted ways, the president let Penny know that they live right on campus, “if there’s anything we can do, let us know.” 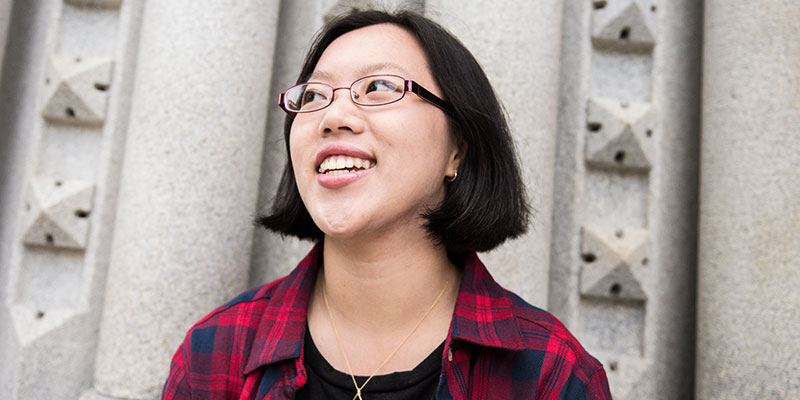 Move-in day for Mallory McFarland happened earlier this summer, when the Manhattan native relocated with her mom to Burlington. She’ll live at home this year, in a place close to campus. “We were ready for a change,” she says about leaving New York City. “The grass, trees, lake and mountains here are so wonderful.” It was the reputation of the Chinese program that drew McFarland to UVM. She’s studying the language as both a way to honor her roots and prepare for the future, knowing that the skill will be helpful for a number of careers she might pursue. McFarland’s also pursuing a dance minor — a passion she took time to explore after high school, performing and teaching with arts organizations in NYC. And she’s looking forward to creative writing classes, a hobby for the four-time-finisher of National Novel Writing Month. The genre of her four unpublished novels? Fantasy, mostly, she says. She’ll be one of the many fans gathering to watch the Game of Thrones finale at the Davis Center Sunday. 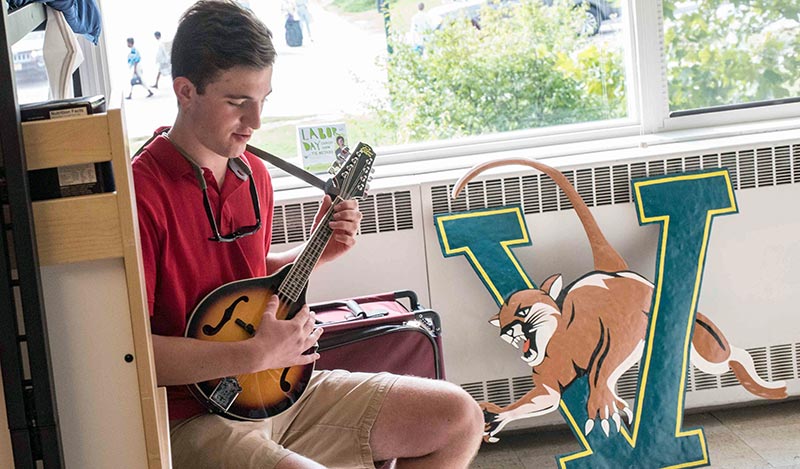 Zach Harris first traveled to Haiti when he was 10. Since then, the Colorado native has been back more than twenty times — as the founder and director of a youth orchestra with 150 members. Now an incoming first-year student at UVM, Harris is majoring in Community Entrepreneurship. “UVM is a great fit for me,” he says, “I aim to make this orchestra, and my love of community service, into a profitable, sustainable career.” In the wake of Haiti’s devastating 2010 earthquake, Zach’s family adopted two Haitian babies—now among his eight siblings.  As a kid, he wanted to help the people of Haiti by starting a soccer team. “But one of my friends there said, ‘We’ve got soccer. What we need is an orchestra,’” he says. So Harris  —  who plays piano, double bass, electric bass, and other instruments — started raising money and has been leading the orchestra (including trips to the U.S.) for the last five years. “We’re just starting a second orchestra in Port-au-Prince now,” he says. When Harris received his letter of admission from UVM earlier this year, he was so excited that he commissioned an artist-friend in Haiti to make a traditional piece of street art out of cut and pounded pieces of steel drum — shaped into the UVM logo.