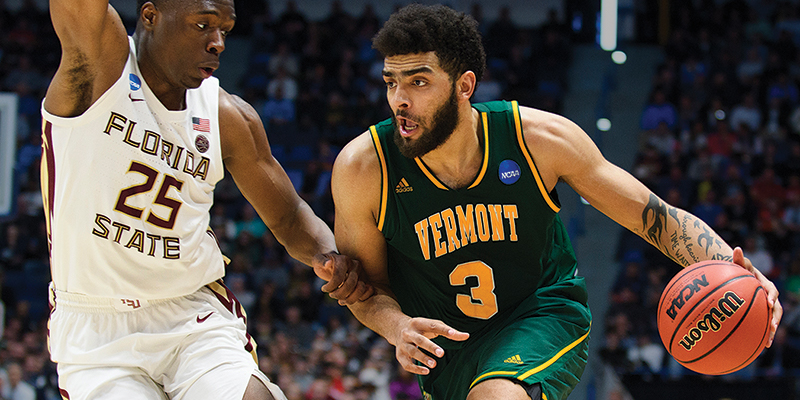 As his senior season begins, Anthony Lamb is set to lead with his voice and by his example—focused on the moment, taking nothing for granted. (Photo: Brian Jenkins)

Last summer, Anthony Lamb had a look into future possibilities, working out with several NBA teams to get a sense for whether he was ready for that next big step. The answer: stay in school and continue to hone your game, in particular shooting from the NBA three-line, guarding on the perimeter, ball handling. The latter might be one reason he’s returned to his high school regimen of carrying, or dribbling, a basketball as his constant companion. That six-foot-seven guy walking across the UVM Green after classes, backpack slung over one shoulder and a basketball in his hand? Anthony.

But early in the semester, as Lamb and a group of his teammates prepare for some morning work in Patrick Gym, he says that his future—National Basketball Association, professional ball in Europe, whatever it might hold—is not the point right now. “All I’m looking at is how can I get this done today. I’ve got, what, thirty-one weeks left of my college life here,” Lamb says. “That’s all that matters.”

Thirty-one weeks, two semesters, one final season to shine at Patrick Gym before Senior Night, March 3, 2020, when his mother, Rachel, will, no doubt, have made another six-hour drive from Rochester, New York, to see her son play.

Anthony Lamb is solidly built and tough, deft-footed and determined, a mix that makes him a force in the paint and has helped enable mid-major Vermont to compete with any high-major program in the country, Kentucky to Purdue to Florida State. Credit for that toughness, to great extent, is due to his mom and his blue-collar hometown. Lamb has the symbol of the city of Rochester and the area code along with the phrase, “I can, I will, I must,” tattooed on his left wrist.

Rachel Lamb was pregnant with Anthony at age sixteen and has worked long hours, juggling responsibilities as a single mom, to provide opportunities for Anthony and his younger brother, Timothy. “Anthony was a baby and I was a baby, too,” she says. “We grew up together.” After years of eldercare in community nursing homes, she has worked as a roofer for the last three years. (When I reach her on her cell late one afternoon in September, she’s on a rooftop searching for the source of a leak. “Like a needle in a haystack,” she says.)

While Anthony is a force on the court, his mom, in kind, brings it from the stands. At halftime of UVM’s first-round 2019 NCAA Tournament game versus Florida State, tied 27-27, sports reporter Nicole Auerbach tweeted: “Anthony Lamb's mom briefly heckled Leonard Hamilton (FSU head coach) as he came off the court. ‘How about No. 3? That's my baby! Maybe you should cover No. 3!’"

Asked if he’d heard that, Lamb smiles and laughs, “Probably, that sounds like her.”

Lamb entered UVM in 2016 as a highly promising recruit out of suburban Rochester’s Greece Athena High School, one of four finalists for New York’s Mr. Basketball title. From scoring twenty-three points in his Catamount debut to becoming the first freshman to win America East Tournament Most Outstanding Player, he quickly found his stride during that first season, culminating in a trip to the NCAA Tournament. (Lamb scored twenty points and collected nine rebounds as #4-seed Purdue knocked the Cats out of the bracket.)

Though he spent a good deal of his sophomore season on the bench with a broken foot, Lamb says it might have been his most important year of development. “Without that happening, I wouldn’t be who I am today,” he says. As a player, he used his perspective, removed from the heat of competition, to better understand defensive rotations, the coaching staff’s expectations of him, “all of the little things that go into basketball.”

A finance major in the Grossman School of Business, Lamb’s season dealing with injury coincided with an impactful business communications class with Lecturer Paula Cope. “What’s the most important thing to getting your message across? Listening. Listening so you can learn how to best reach somebody in a way that they will hear what you need to communicate,” Lamb says. It’s a lesson that has stuck, helping him grow as a teammate and team leader.

When Rachel Lamb considers how her son’s experience at UVM has squared with her expectations, she says she didn’t expect the help he has had to develop not just as a player, but as an individual. She credits the whole coaching and support staff, but has particular appreciation for assistant coach Hamlet Tibbs. Anthony’s connection with Tibbs from New York AAU leagues was key to his recruitment, and their relationship has grown close, spending hours together talking basketball and life.

“Anthony is a very thoughtful and cerebral person,” Tibbs says. “He spends a lot of time in the community visiting people that are going through hard times, visiting kids at schools and the hospital. He cares about people’s well-being; he’s a wonderful person.”

Now a senior on a team that is rich on returning talent, bolstered by a number of promising new recruits and transfers, Lamb says the squad came together well during summer workouts, maybe the best he’s seen in his time at UVM. As that potential of summer and fall practices is put to the test this winter, Lamb is set to lead with his voice and by his example—focused on the moment, taking nothing for granted.