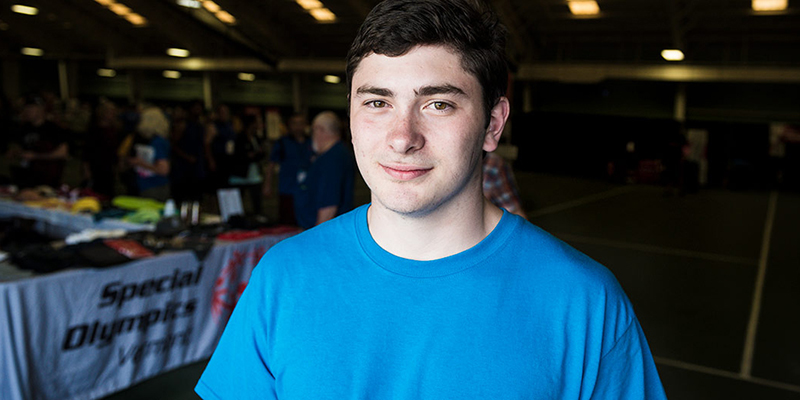 From the moment he entered the gym for a Special Olympics unified basketball team practice as a Burlington High School junior, Sam Donnelly ’20 felt it. “It was like a switch flipped,” he says, immediately drawn in by a warm welcome and seamless spirit of equality and inclusion. So began a lasting relationship.

Six days after high school graduation, Donnelly moved to New York for a gap year with, he admits, a vague plan and a thin bank account for city living, built on mowing lawns and other high school jobs. Almost immediately, a shot in the dark “Can I have an internship?” tweet at Special Olympics in NYC landed on the right phone. Yes, you can. Unpaid, but Donnelly stacked up experience and later earned a paid internship at Special Olympics Vermont.

During his first year at UVM, 2016-17, Donnelly deepened his Special Olympics work on both a local and global scale—founding the UVM Special Olympics Club to rally like-minded students and traveling to Graz, Austria, last spring for the Special Olympics Global Youth Summit. There, Donnelly presented on his idea, funded by a $2,500 SO grant, to create a social inclusion class at Vermont high schools.

As his sophomore year begins, Donnelly already has a strong vision for where he’d like to be when college graduation arrives. President of UVM Democrats student club, he has his sights on a Burlington City Council seat, first step, he hopes, in a career in public service that might one day lead to the U.S. Senate. At the core of Donnelly’s political ambitions—supporting and shaping education and inclusion at a policy level.

A major in community and international development in Community Development and Applied Economics, Donnelly has found an ideal academic fit. “That department is what makes it for me at UVM,” he says and rattles off the names of professors who have influenced him—Dan Baker, Kelly Hamshaw, Jane Kolodinsky, Tom Desisto. “I am not only excited to go to class, I’m excited do my homework. Every single example used in that program is about Vermont. I get the opportunity to apply that, make it real.”