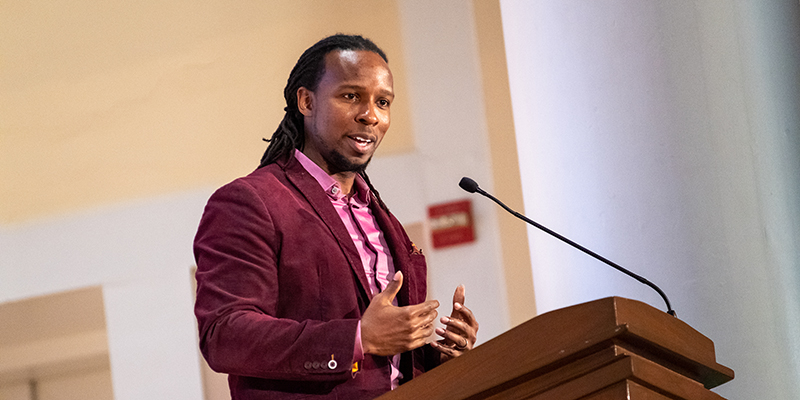 “Historically the heartbeat of racism itself has always been denial,” said keynote speaker Ibram X. Kendi at the Martin Luther King Jr. Celebration, Education and Learning Series on January 28. An award-winning author and historian, Kendi leads a first-of-its-kind center for antiracist research and policies at American University. (Photo: Sally McKay)

“We’ve been taught about King’s dream, but how often have we been taught about King’s nightmare?” Ibram X. Kendi asked audience members as he opened his keynote speech for the University of Vermont’s Annual Martin Luther King, Jr. Celebration, Education and Learning Series. “If King’s dream has been racial progress, then his nightmare has historically been racist progress.”

A bestselling author, celebrated historian and founding director of the Antiracist Research and Policy Center at American University, Kendi demonstrated how the opposite of “racist” is not "not racist" or lack of racism, but "antiracist," and how racial inequity is not the result of racist people or ideas, but the result of racist policies.

“When you track racist ideas or racist policies, you’re tracking and studying the ways in which they evolve and change, the ways in which they became more sophisticated…and there’s no more sophisticated racist idea ever created than the idea that this nation is post-racial. Because like every other racist idea, the purpose of this idea is to make Americans believe that the problem is people and not policy,” he said.

In Washington, D.C., Kendi leads a first-of-its-kind center dedicated to eliminating racist policies that perpetuate racism and racial inequity and is a professor of history and international relations. In 2016 he became the youngest winner of the National Book Award for Nonfiction for his book “Stamped from the Beginning: The Definitive History of Racist Ideas in America,” which explores the tangled history of racist policies that spur and justify racist ideas. His latest book, “How to Be an Antiracist,” quickly became a “New York Times” bestseller. Kendi was awarded the prestigious Guggenheim Fellowship in 2019 and is a regular contributor to “The Atlantic” and the “New York Times,” among other outlets.

Throughout his speech, Kendi challenged racially charged ideas and perceptions with history and facts. He pointed to disparities in the justice system, noting that African Americans account for 40 percent of the incarcerated population and only 13 percent of the national population. “It’s either because black people commit more crimes or it’s because of racist policies,” he said.

He explained that similar policies, like Jim Crow Laws, have come to be considered racist based on their outcome and results observed in practice, not on a litmus test of racist language or intent at the time of its proposal. “Historically the heartbeat of racism itself has always been denial,” Kendi said, then posed a question: “But what if we, as a nation, defined policies as racist based on outcomes?”

Just as the margin between justice and injustice does not exist in policy—every law, legislation or policy either leads to justice or injustice, he argued—the margin between racist and antiracist does not exist in our daily lives. Kendi implored the audience to consider the binary nature of racism and how the opposite of racism is not the absence of it, but rather the act of being antiracist. “Every idea either connotes one or the other. Are we supporting racist or antiracist? There is nothing between racist and antiracist.”

He explained that the sting of being called “racist” stems from its perception as an attack rather than as a fact or descriptive word, like a tattoo rather than a trait. In a personal and powerful anecdote, Kendi compared the sting and hurt he felt in the moment his doctor diagnosed him with stage four cancer, to the pain that can come with being called “racist.” What's more, he shared how to become “antiracist.”

“Even though I’m shocked that someone would say that about me, I have two options: I deny it, or I go through the painful process of healing.”