UVM scientist and other experts call for better rules in Science 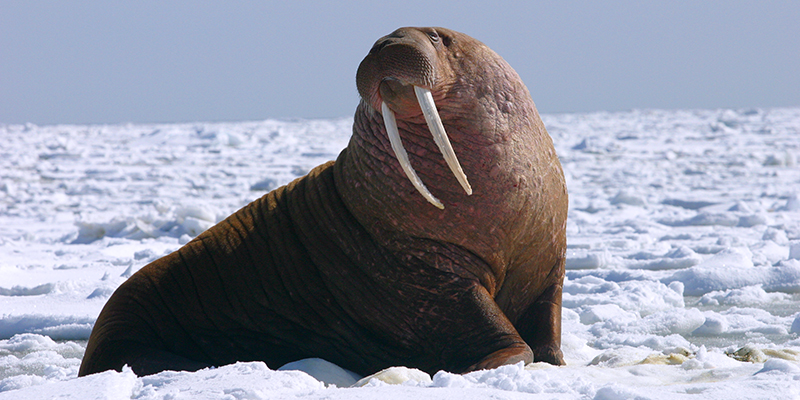 Pacific walruses, like this large bull, face a risky future as sea ice diminishes in a warming world. Yet in 2017 the U.S. Fish and Wildlife Service withdrew the walrus from consideration for listing under the Endangered Species Act. Now a team of scientists aims to strengthen the rules used to implement the ESA—to make decisions like this one more transparent. Their recommendations were published in the journal Science. (Photo: Joel Garlich-Miller, U.S. Fish and Wildlife Service)

For forty-seven years, the Endangered Species Act has stood as the nation’s strongest and most effective law for protecting animals and plants threatened with extinction—from the bald eagle to the American burying beetle, the Alabama leather flower to the Aleutian shield fern.

In 2019, the Trump Administration made the most sweeping changes to the implementation of the Endangered Species Act in decades—making it harder for the federal government to protect the habitats that plants and animals will need in a warmer future. Many biologists and environmental groups have called for these rules to be reversed, to simply return to the Obama-era rules.

Now a leading group of conservation scientists and ESA policy experts—including University of Vermont conservation biologist Joe Roman—are making the case that a “rule reversal” will not be sufficient to allow the Act to do its job of protecting species. Instead, they’re calling for deeper improvements to the rules the U.S. Fish & Wildlife Service and the National Marine Fisheries Service use to apply the law—aiming to make the Act more effective and to gain bipartisan and industry support in an era of accelerating climate change.

The team’s analysis and policy recommendations were published on November 5 in the journal Science.

Into the “Foreseeable Future”

“It’s not enough to just go back to where we were eighteen months ago; we need reform,” says Roman. “We’re not talking about revising the Act itself—that legislative can of worms—but it is clear that endangered species, wildlife agencies, landowners, and citizens would all benefit by updating the regulations and policies that are used to implement the law.”

At the center of the team’s call for reform is a need for clarity.

Consider the divergent cases of the Pacific walrus and the Arctic ringed seal. Both animals face similar threats from rapid losses of sea ice and snow cover. But a 2017 decision not to protect the walrus was based on climate projections that went out only to 2060, because the Fish & Wildlife Service considered conclusions beyond this date to be “based on speculation, rather than reliable prediction.” However, five years earlier, the National Marine Fisheries Service listed the seal as “threatened” based on modeling that was presented as “reliable” out to 2100, the same time horizon as the authoritative modeling of the IPCC (the Intergovernmental Panel on Climate Change) and others.

In short, the wildlife services have had an ad hoc and inconsistent approach to defining the “foreseeable future,”—and other ESA rules. “This kind of ambiguity hurts everybody,” says Ya-Wei (Jake) Li, an expert on the Endangered Species Act at the Environmental Policy Innovation Center and the lead author of the new study in Science, “and invites political interference that undercuts protections for species, erodes public confidence, triggers lawsuits that are costly for all. It polarizes the ESA, a law that could enjoy far more support across the political spectrum.”

For example, once the National Marine Fisheries Service had “concluded that the extent of the of sea ice loss was reliably foreseeable to 2100, any conflicting decisions should explain why that conclusion was wrong,” write the team of scientists, including Li, Roman, David S. Wilcove at Princeton University, Timothy Male at the Environmental Policy Innovation Center, and Holly Doremus at the University of California, Berkeley. “What is required is consistency and transparency.”

The federal wildlife services, the team argues, should clarify the principles that guide their decisions, provide more public access to the data behind decisions, and give clear explanations of how they exercise discretion in offering—or not offering—protections to threatened species.

In a puzzling case, the U.S. Fish & Wildlife Service, using a so-called ESA 4(d) rule, offered the Gunnison sage grouse full protections on agricultural lands, but the related lesser prairie chicken was exempted from similar protections on the same kind of farmland. “The agency may have had valid reasons for this discrepancy, but they never publicly explained those reasons,” the team writes.

“The recommendations that we're focusing on provide the public with more transparency—and transparency alone can really help reduce a lot of the controversy” that has mired the ESA in recent years, says Jake Li. “But we’re also advocating for new ideas that would bring better science and more flexible approaches to the decisions the wildlife services make.”

For example, in the wake of this presidential election, a new package of regulation and funding for working with landowners—to offer tax incentives for easements and land donations—could unlock recovery opportunities for the many threatened plants and animals that persist on private lands. And investments in remote sensing and other technologies could give a better view of how climate change will impact the nearly 2,400 species protected by the ESA.

“A strong majority of Americans supports the Endangered Species Act and sees wildlife and wild plants as a public good,” says Joe Roman, a professor in UVM’s Rubenstein School of Environment & Natural Resources and Gund Institute for Environment. “So what will it take to help landowners protect these species? Think of what could happen if we got federal decisionmakers, governors, conservationists, industry leaders to sit down together to help both species and landowners. With the right leadership, you could get broad bipartisan support to make the Endangered Species Act an even better tool for preventing the loss of biodiversity.”

Joshua E. Brown
It’s not enough to just go back to where we were eighteen months ago. We need reform. —Joe Roman

ESA study in Science
Vulnerable Species in the Crosshairs