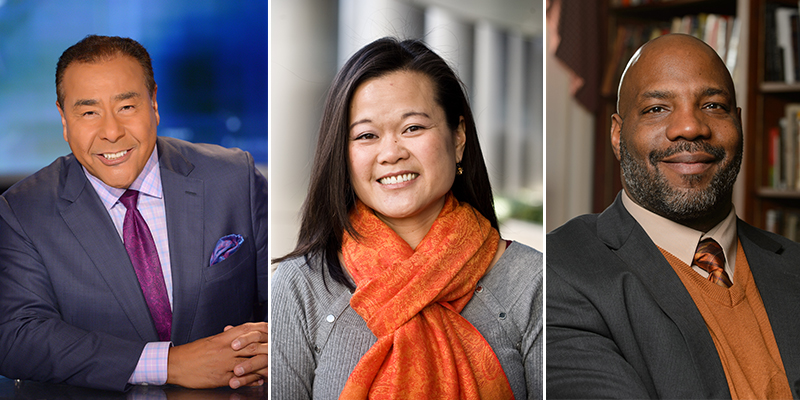 Journalist John Quiñones, professor of higher education leadership OiYan Poon, and journalism professor and author Jelani Cobb are among the speakers at this year’s Blackboard Jungle, “The University: A Sanctuary or an Arena?” The symposium coincides with protests for racial equity and social justice on campuses around the U.S.

The focus of this year’s symposium, “The University: A Sanctuary or an Arena? Fostering Inclusive and Difficult Conversations,” coincides with protests and other forms of activism on college campuses across the country focused on racial equality, diversity and justice.

A full slate of related workshops designed to support UVM faculty and staff interested in gaining skills, knowledge and a deeper understanding of diversity to support excellence in teaching, service and research is scheduled for March 23. Interested members of the UVM community can register online for the symposium, sponsored by the Office of the Vice President for Human Resources, Diversity and Multicultural Affairs.

“It is important to foster environments that are intellectually challenging but also respectful, safe and rewarding for all students, staff and faculty,” said Wanda-Heading-Grant, Vice President for Human Resources, Diversity and Multicultural Affairs. “How can we talk across divides and bring about a respectful and open exchange of ideas, perspectives and beliefs? How can we honor identities and insist on freedom of expression? Can the university campus offer a model of productive discourse in a divided society? Inside and outside classrooms, these are among the central problems faced by the twenty-first century university and beyond.”

Quiñones, a 30-year veteran of ABC News, anchors the "Primetime" series “What Would You Do?” and has served as a correspondent for "20/20." Having grown up in a poor family of migrant workers, Quiñones is expected to share his journey to becoming ABC’s first Latino correspondent and a seven-time Emmy Award-winning journalist. His keynote presentation, titled “What Should You Do? Be an Active Bystander” is free and open to the public.

OiYan Poon, assistant professor of Higher Education Leadership in the School of Education at Colorado State University, will give the Dean’s Breakfast Keynote address, titled “Asian Americans between Black and White: Racial Justice or Just Us” on March 23 at 8 a.m. in the Silver Maple Ballroom. She is co-editor of a forthcoming edited volume from Stylus Publishing titled "Difficult Subjects: Insights and Strategies for Teaching about Race, Sexuality and Gender."

Jelani Cobb, a professor of journalism at Columbia University, will give the Luncheon Keynote address at noon, titled “The Half-Life of Freedom: Race and Justice in America Today.” An expert contributor on MSNBC, NPR and CNN, Cobb has authored two books, including "The Substance of Hope: Barack Obama & the Paradox of Progress (Bloomsbury, 2010)." He will host a conversation later that afternoon at 2 p.m., titled “Journalism, Fake News, Politics, and Race.”

A series of symposium workshops will be offered after each keynote address designed to create open spaces where all members of the campus community can participate in authentic dialogue, reflection and learning to promote inclusiveness for all individuals. A number of UVM faculty will be running the workshops along with other top academics and practitioners from across the country.