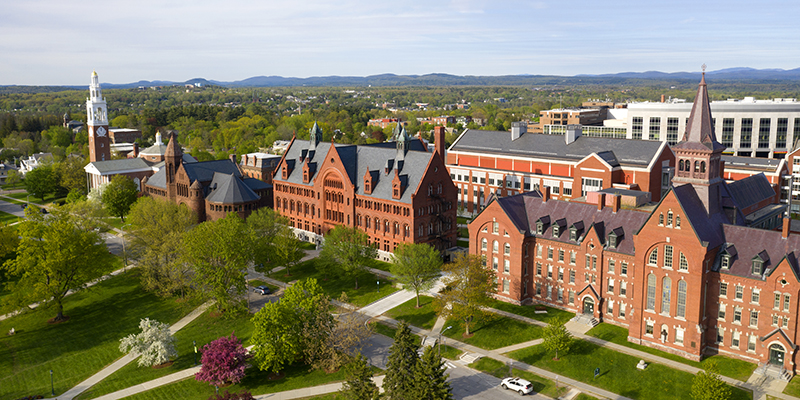 “I am so grateful to our amazing donors,” said the University’s new president, Suresh Garimella.  “The Move Mountains campaign has had—and will continue to have—a transformative impact on UVM’s students, faculty, and staff.  Our donors have touched every corner of campus, and the benefits of their generosity will be felt throughout the state of Vermont, across our region, and around the world.  UVM is a premier public research and teaching university thanks to the support of the UVM family.”

President Garimella, who assumed his office on July 1, also expressed appreciation to his predecessor, Tom Sullivan.  “President Sullivan’s leadership and vision throughout Move Mountains inspired many unprecedented gifts to UVM and fostered a culture of engagement with our community that is the foundation for future success.  He leaves a robust legacy here, including a strong partnership with the UVM Medical Center.”

“The goal of Move Mountains was to help equip the University, its students, and its faculty with the resources they need to address the most critical challenges facing our global society,” noted Shane Jacobson, President and CEO of the University of Vermont Foundation.  “Thanks to the generosity, dedication, and hard work of our alumni, friends, volunteers, and staff members that goal has been achieved.  I am profoundly grateful to our donors for their extraordinary encouragement and support.”

Many generations of students and patients will benefit from the $581 million in philanthropic investments made by Move Mountains donors, and the campaign’s impact is already being felt at the University and UVM Medical Center.  The Larner College of Medicine, the Grossman School of Business, and the Gund Institute for Environment were all named during the campaign in recognition of donors’ transformative philanthropic investments.  In the latter two cases, these donors are still actively inspiring others to join them in their support by offering matching gift challenges in these areas.

Donors recognized the importance of attracting the best students to UVM, and gave more than $83.7 million to support undergraduate scholarships and graduate fellowships.  While doing so, they created 291 new permanent endowed funds that will benefit thousands of learners.  In addition, alumni, family, and friends gave $66.9 million for endowed faculty positions—forever strengthening the ranks of UVM’s outstanding teachers, scholars, and clinicians.  Donors exceeded campaign goals by establishing 69 new endowed faculty chairs and professorships, more than doubling the University’s pre-campaign total.  Endowed funds like these are permanently invested and will provide steady support to these teacher-scholars for generations to come.

Hundreds of academic, athletic, research, student, and patient programs were created, expanded, or strengthened thanks to over $331 million in gifts from supporters.  Preeminent among these is the $100 million lifetime philanthropy of Helen and Robert Larner ’39, MD’42 (nearly all given during the campaign) that has helped secure the College of Medicine as a national leader in lecture-free, team-based learning. Other notable highlights include the MassMutual Center of Excellence for Complex Systems and Data Science, the Humanities Center, the Tarrant Institute for Innovative Education, the UVM Cancer Center, and the University’s science, technology, engineering, and mathematics (STEM) initiatives.

Donors have also transformed the fabric of campus, greatly enhancing many teaching, research, clinical and extracurricular spaces.  Gifts totaling $99.8 million helped construct or renovate at least twenty key facilities during the campaign, including Cohen Hall for the Integrative Creative Arts (the former Taft School), Ifshin Hall, Billings Library, and the UVM Alumni House.  Significantly, Catamounts fans gave $32 million toward the transformation of the Patrick-Forbush-Gutterson Athletic Complex, including the largest capital gift in UVM history to name the new Tarrant Center.

As long-standing partners, UVM and the UVM Medical Center worked collaboratively throughout the Move Mountains campaign, particularly in areas related to health care education, medical research, and patient care.  Donors from the local community in particular rallied behind the UVM Medical Center in unprecedented ways, demonstrating their commitment to supporting world-class health care in the region.  The Medical Center received the largest contribution in its history with Bob and Holly Miller’s gift to support construction of a state-of-the-art new inpatient facility.  The Robert E. and Holly D. Miller Building creates a better healing environment for patients and a better research and learning environment for UVM scientists and students. It overlooks UVM’s central campus and opened to patients on June 1, 2019.

The Move Mountains campaign inspired an unprecedented number of donors and gifts, with more than 75,000 alumni, parents, students, and friends making in excess of 205,000 commitments.  Nearly 39,000 donors made their first gift to UVM during the campaign.  Parents and grandparents of UVM students accounted for more than a quarter of all donors, including almost 3,800 who are themselves UVM graduates.  Close to 400 donors documented planned gifts to the University during the campaign—including bequests, annuities, and charitable trusts—that will help ensure the University’s financial health in the future.  Vermonters accounted for 35% of donors to UVM during the campaign.

“The real triumph of Move Mountains is the relationships that we’ve built that engage and harness the power of the UVM family,” observed Jacobson.  “It’s been incredible to see tens of thousands of people—from all around the world and at all gift levels—step forward and contribute to making UVM even better.  Our donors’ generosity will have far-reaching impacts in Vermont and beyond for many, many years to come.  They have our heartfelt thanks for being part of this team effort.”

“Our students are the heart of UVM,” reflected Garimella, “and this campaign has done wonderful things for them.  As we move ahead, I look forward to working with supporters to ensure that UVM is an ever greater university for these students.  Increasing affordability and accessibility, improving student outcomes, enhancing our teaching and research—our alumni and friends all have important roles to play in these crucial areas.  I’m inspired to know that they are up to the challenge.”