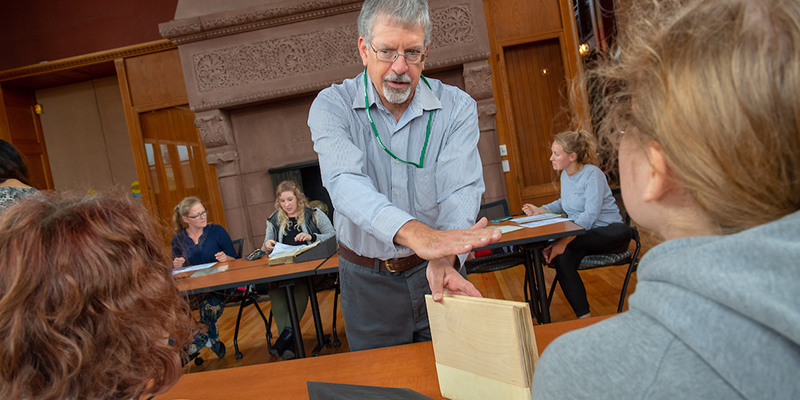 Over the years, the Billings Library, the University of Vermont’s most architecturally important building, has been home to a variety of university functions, some more suited to the cathedral-like grandeur of its interior than others.

Designed by H. H. Richardson, the great 19th American architect, the building began life in 1885 as the university’s library.

In 1961, with demand for its services far exceeding Billings’ capacity, the university built a large new library and, in 1963, converted Billings’ somber interior space to an unlikely – and as time went on, lightly used – student center.

In 2007 a much-needed modern student center opened on the UVM campus, and Billings became a sublime setting for a series of mostly everyday lectures, meetings and campus events.

Thanks to a recently completed $11.4 million renovation, Billings will again house university departments whose academic import match its majestic design.

UVM Libraries' Special Collections department took up residence in August, returning the building to its roots as a library. In September the Miller Center for Holocaust Studies, the UVM Humanities Center and the Center for Research on Vermont moved into their new offices on the fourth floor of the building.

“The co-location of these important areas of scholarship will make Billings one of the most vital academic and intellectual centers on the UVM campus, as it once was,” said UVM president Tom Sullivan. “It is heartening to see this architectural masterpiece returned to its former glory.”

Philanthropy key to original Billings – and to the renovation

The original Billings Library was financed through a philanthropic gift from railroad magnate and UVM alumnus Frederick Billings.

The renovation, launched in June 2017 and completed this past summer, has also been made possible by philanthropy.

Among the most important gifts was the first, in 2006, a $5 million gift from the late Leonard (’51) and late Carolyn Miller to establish a Holocaust studies center at UVM to honor and expand the legacy of Raul Hilberg, the late UVM political science professor and renowned Holocaust scholar.

Of the total, $3 million went toward the Billings renovation, where the center – called the Carolyn and Leonard Miller Center for Holocaust Studies – would be permanently located. The remainder was set aside for endowed professorships in Holocaust studies.

“The Miller family’s gift puts valuable endowment funds into place for the Miller Center for Holocaust Studies, which has a worldwide reputation and is one of the most significant scholarly enterprises at the university," Sullivan said. "The gift also sparked the Billings renovation. For both reasons, we are eternally grateful to the family for its generosity.”

A $3 million gift from Jack (’64) and Shirley Silver was also critical to the Billings Library renovation, giving considerable momentum to the project.

“Jack and Shirley were far sighted in their inspiring support of this important campaign priority," Sullivan said. "We are deeply appreciative to them for so significantly enhancing this vital part of the university.”

“When I was a student at UVM, I always knew Billings was something special,” Silver said. “It’s thrilling to be part of the building’s renovation and to see it restored to its original function as a library and academic center of the university.”

In honor of the Silvers, the collection has been named the Jack and Shirley Silver Special Collections Library.

A gift of $1 million was made to the renovation by Richard [’63] and Pamela Ader, who appreciated the architectural significance of the building and the many purposes the renovated Billings Library would serve. Additional gifts totaling $1.5 million from approximately 200 donors rounded out the $8.5 million in private support for the project.

It was a busy summer for Special Collections staff.

From mid-July to mid-August, staff oversaw the transport of tens of thousands of rare books, manuscripts, maps, photographs and documents, moved via truck in carefully packed boxes and foam-lined carts from Special Collections’ former location in the basement of Bailey-Howe Library to the second floor of Billings, where temperature- and humidity-controlled stacks had been built in an area formerly occupied by a dining hall.

“Housing these materials in one of UVM’s premier buildings at the center of campus demonstrates the value the university places on Special Collections and will raise awareness of our holdings among faculty, students and the outside community,” he said.

There are practical benefits, as well, he said. “We have improved security and climate control, as well as work spaces that are much more inviting and comfortable for both visitors and staff.”

To facilitate the use of special collections materials in teaching, the renovated Billings will feature two dedicated, technology-enabled classrooms, a large one in the Marsh Room on the third floor and a smaller one on the second, both major improvements over the former space, where classes were held in the middle of the reading room.

“Collaborating with faculty to give students access to primary source materials – from manuscripts to maps to blueprints – has become a central strategy for engaging students in disciplines ranging from the humanities, social science and the arts to science, math and engineering,” said Prudence Doherty, special collections librarian. “The new classrooms will greatly enhance our ability to deliver this kind of teaching.”

The classrooms will also be used for public events and presentations sponsored by the Silver Special Collections Library.

Also following national trends, the Billings renovation contains two dedicated display areas – in the apse on the third floor and in an area outside the central reading room on the second – to draw in students and the university community and engage them in Special Collections’ holdings.

Billing’s North Lounge will also see a return to its past. The space will become a reading/study room, as it was in the original library, with long tables, comfortable chairs and nooks for private study along the walls.

The co-location of the Miller Center for Holocaust Studies, the Center for Research on Vermont and the Humanities Center in Billings, makes the building a “powerful nexus for the humanities on the UVM campus,” Sullivan said.

“The centers have a vital role to play in and of themselves,” he said. “In addition, we expect that the co-location with the Silver Special Collections Library will amplify their impact by enabling closer collaboration and synergy, both among the centers and with Special Collections.”