A cornerstone of our Perkins collection is the Charlotte Whale. In 1849, while constructing the first railroad between Rutland and Burlington, Vermont, workers unearthed the bones of a mysterious animal near the town of Charlotte. Buried nearly 10 feet below the surface in a thick blue clay, these bones were unlike those of any animal previously discovered in Vermont. After consulting with experts, the bones were identified as those of a "beluga" or "white" whale, an animal that inhabits arctic and subarctic marine waters in the northern hemisphere.

Explaining a whale in Vermont

Because Charlotte is far inland (over 150 miles from the nearest ocean), early naturalists were at a loss to explain the bones of a marine whale buried beneath the fields of rural Vermont. Today, we can use the Charlotte whale to aid in the study of the geology and the history of the Champlain Basin.

How did a whale get in Vermont?

The Charlotte whale was preserved in the sediments of the Champlain Sea, an arm of the ocean that extended into the Champlain Valley for 2500 years following the retreat of the glaciers 12,500 years ago. 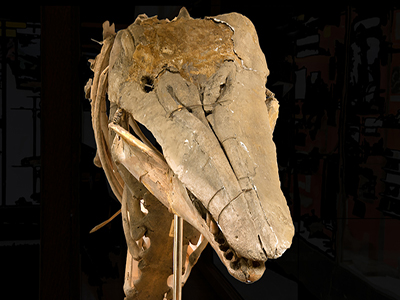 What kind of whale was it?

The Charlotte whale is a beluga whale (Delphinapterus leucas), approximately 12 feet in length. Although it is not possible to determine the sex of the specimen, tooth wear and skull sutures indicate that it was an adult.

How was it found?

The whale skeleton was originally unearthed near Charlotte, Vermont in 1849 by railroad workers during construction of the first railroad between Rutland and Burlington. Thinking the bones to be those of an old horse, the workmen continued to excavate, destroying parts of the skull.

While walking near the construction site, Charlotte resident John G. Thorp observed the bone fragments in the dirt. Finding the bones to be unusual, Thorp convinced the job overseer to move the work to another segment of the project to allow for study and collection.

What was the Champlain Sea?

The landscape of Vermont, as well as the landscape of much of northern North America, Europe and Russia has been profoundly affected by glaciation over the last 1.5 million years. The Charlotte Whale was preserved in the sediments of the Champlain Sea, an arm of the ocean that extended into the Champlain Valley for 2500 years following the retreat of the glaciers 12,500 years ago. The Champlain Sea was an inland arm of the Atlantic Ocean that flooded lowland areas following the retreat of the great continental ice sheets between 12,000 and 13,000 years ago. Ocean waters occupied areas depressed below sea level by the weight of continental ice sheets, ice sheets which at times were over a mile thick. Once the weight of the ice disappeared, the land slowly rebounded until it was once again above the level of the sea. (The elevation of present day Lake Champlain is approximately 95 feet above sea level.)

The general oceanographic conditions of the Champlain Sea are thought to be similar to those that presently exist in the James Bay region of Canada. Plant and animal communities in and around the Champlain Sea were likely similar to those that exist near the present Gulf of St. Lawrence, where species that inhabited the former inland sea are still found.

The tremendous weight of the glaciers caused the earth beneath them to compress and subsequently sink. Immediately after the glaciers retreated northward, the land remained depressed for quite some time, allowing the ocean to overflow the land. Thus was the Champlain Sea born.

As time marched on, the earth slowly rebounded, and the mouth of the sea gradually closed.

How did the sediment preserve the whale? 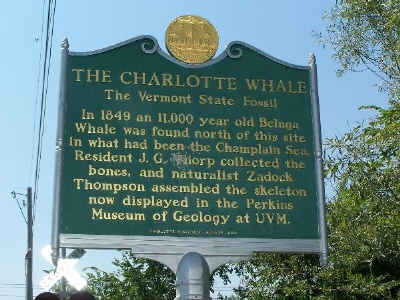 The whale was declared the official State Fossil in 1993, and the bill was signed into law by Governor Howard Dean at a ceremony at the elementary school in Charlotte.

Champlain Sea: Did You Know?

During its maximum extent, the Champlain Sea covered an area of over 20,500 square miles in portions of Ontario, Quebec, New York and Vermont. This area includes much of what is now the St. Lawrence River Valley, the lower Ottawa Valley and the Champlain Valley.