Anthropology Student in Argentina with OUR Mini Grant 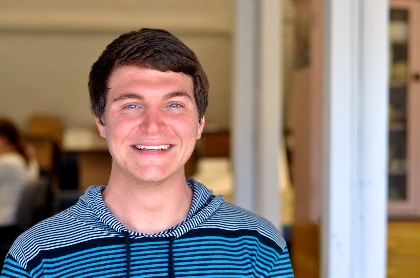 You may have seen Riker in his role as an AdvoCat, wearing shorts and leading tours. His record for early-season shorts wearing was this past year, when March found him strolling past my Old Mill Annex window, looking sun-kissed but shivering. He had just returned from three months abroad doing research in Argentina. He hadn’t planned to do research prior to his study abroad semester, but an incident involving a subway, his iPhone, and a pickpocket opened his eyes to a subterranean world of poverty and, well, transportation.

While underneath Buenos Aires, Riker was struck by a distinct connection between the poverty he saw and city's public transit system, which led him to write a research grant in order to study how the growth of the city and the future subway expansion were tied to socioeconomic disparities. With the support of his Anthropology advisor, Dr. Teresa Mares, his Spanish language aptitude, and his minor in CDAE, he had the necessary background to pursue a 3-month research project investigating ways to create a safer and more useful public transportation while simultaneously combatting the growing poverty rates. His results, a 70-page manuscript, became the basis for his senior capstone and a document he shared with his contacts in the Argentinian government.

Riker learned many things from his time in Argentina –ethnographic techniques, a personal wanderlust, and an unstoppable optimism –all of which were crucial to his success. They also informed his career goals; Riker is leaving UVM with a great resume and plans to apply his experiences in graduate school and in future trips abroad.

Lily Boardman Fedorko
It was Riker's interest in poverty and public transportation that led to his interest in urban planning.