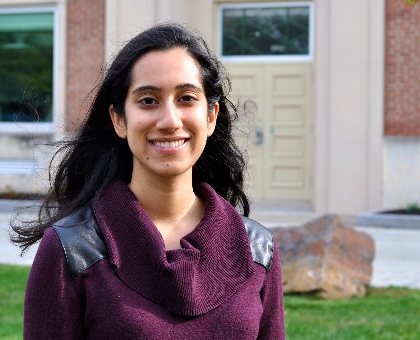 Not everyone is able to combine nutrition with biochemistry and a desire to have a clinical research experience, but that is exactly what this student did... eventually. Hira (Biochemistry ’15) was confident from her first year on campus that getting involved in research would fit with her pre-med path. And while she had to research a number of faculty first, she eventually found her preferred combination working on the effects of milk fat on the human body with Dr. Jana Kraft (Animal and Veterinary Sciences with a joint appointment in Medicine).

Hira started her research by crafting experimental diets in collaboration with a Bionutritionist at the Clinical Research Center in Fletcher Allen (now UVM Medical Center) during the fall of her sophomore year. The similar nutrient profiles of the experimental diets compared to each other allowed for the isolation of milk fat to better understand its effects on the human body. The small Reidel Award for this project helped pay for the analysis of the diets and led to the next step of recruiting participants to be subjected to the all dairy fat diets during subsequent summers, one of which she funded by winning the Honors College Summer Research Award.

The research itself consisted of providing 12 test subjects with the diet plans, which changed at planned intervals of two and three weeks per diet. She collected stool samples and measured the bacterial content affected by changes in diet, and noted how milk fat played a role in these results. Her summer working with human subjects directly prepared her for work with patients in the future. When asked what the most exciting or valuable part of her research was, Hira had a hard time finding just one. She shared her appreciation for the independence she was given in the research group as “only an undergraduate student”. Hira was excited to be part of such a pioneering study. And what did it lead to? Her results await publication, but her own path has led to the Geisel School of Medicine at Darmouth College. We could not be more pleased unless we had eaten the yoghurt ourselves!

Undergraduate Research
Hira presenting at the SRC in 2015