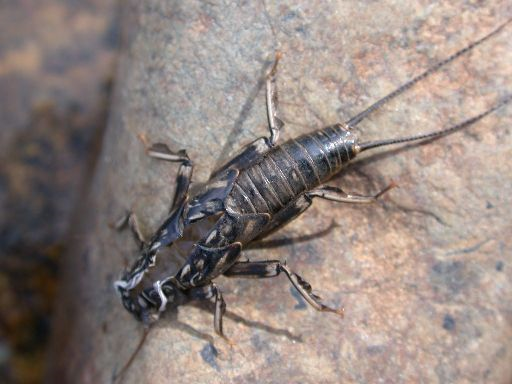 Exuviae of a recently emerged stonefly, an indicator of good water quality.

The Vermont Department of Environmental Conservation (DEC) is conducting long term monitoring of twelve “sentinel” streams in Vermont. These reference streams are widely variable in terms of size (4.6 -510 km2), elevation (33m – 585m) and geographical separation. They are in watersheds that have significant protection against impacts from anthropogenic activity. One of the longest running sentinel monitoring stations is at Ranch Brook near Stowe, VT. With a drainage area of 10 km2 and an elevation of 378 m, it is one of the smallest and most pristine sentinel streams.

By focusing on reference streams with negligible prospects for development or land use change, DEC hopes to be able to isolate long term impacts related to climate change. All twelve streams are currently being monitored on an annual basis for water chemistry, physical habitat, water temperature, and biology (fish and macroinvertebrate communities). Several sites are also being gaged for stream discharge. Through this monitoring, we hope to be able to gain an understanding of how climate change is affecting stream habitat and water quality, and how changes in these abiotic variables may cause long-term alterations in biological communities.

Vermont DEC collects macroinvertebrate community samples during an annual index period that runs from September 1st through mid-October. Samples are collected from riffle habitats, and sorted and identified in the laboratory. DEC biologists use population data, as well as a number of community variables (called metrics) to assess stream health. These metrics cover many aspects of community structure and function, including biodiversity, tolerance to pollution and ecological feeding habits. Metric values are compared to established thresholds determined from historical statewide data. These metric outcomes are then used to determine a narrative assessment for community health, using a five tier scale ranging from Poor to Excellent.

Abiotic data related to stream habitat is collected in conjunction with biology, and is used to explain what factors are shaping the biological communities. These habitat variables include water chemistry (including pH, alkalinity, sulfate, earth metals, turbidity, chloride, and nutrients), riparian canopy, substrate particle size, and periphyton cover. With a continuously operated USGS gage and annual monitoring by VTDEC since 2000, Ranch Brook also has one of the best data sets in the state for pairing biological condition with stream hydrology. Continuous stream discharge data is available from the USGS gage, in addition to daily mean and annual peak discharge values.

Figure 24 shows 2015 results for three of the eight metrics used to assess biological condition, as well as the overall assessment rating. Macroinvertebrate density at Ranch Brook was 659 individuals per square meter, higher than Vermont DEC’s minimum biological criteria for a healthy stream. This is within the range of other reference streams, and similar to the average of other randomly chosen small high gradient streams throughout the state. This is a significant recovery for Ranch Brook, which has shown a depressed density for several years following flood flows in 2010 and 2011. Total species richness (44) was very high in 2015 compared to DEC’s minimum criteria (27), and similar to reference and statewide averages.

A “functional feeding group” refers to one of several types of ecological feeding types to which a species has evolved; including predation, filtering suspended organic matter from the water, scraping algae from rock surfaces, and shredding fallen leaves and other detritus. Small forested streams like Ranch Brook typically have low algae growth and grazing, but high quantities of leaf detritus, and populations found at the site should reflect this. The PPCS-FFG score is based on a model that compares the distribution of functional feeding groups at a given site to what we would expect to find at a hypothetical site untouched by human activity. High scores at Ranch Brook indicate increased similarity to a typical reference stream, and this stream scores at or above reference and statewide averages.

High values for these three metrics, as well as the other metrics evaluated by DEC, caused Ranch Brook to get a rating of Excellent in 2015, the highest possible score. A score of Good (indicating a moderate change from the reference condition) is used as the benchmark for minimum acceptable biological health. In addition to acknowledging the high ecological condition of Ranch Brook, it should also be noted that other reference sites and randomly chosen streams throughout Vermont also score very highly. This is a good sign for the overall quality of headwater streams in Vermont. 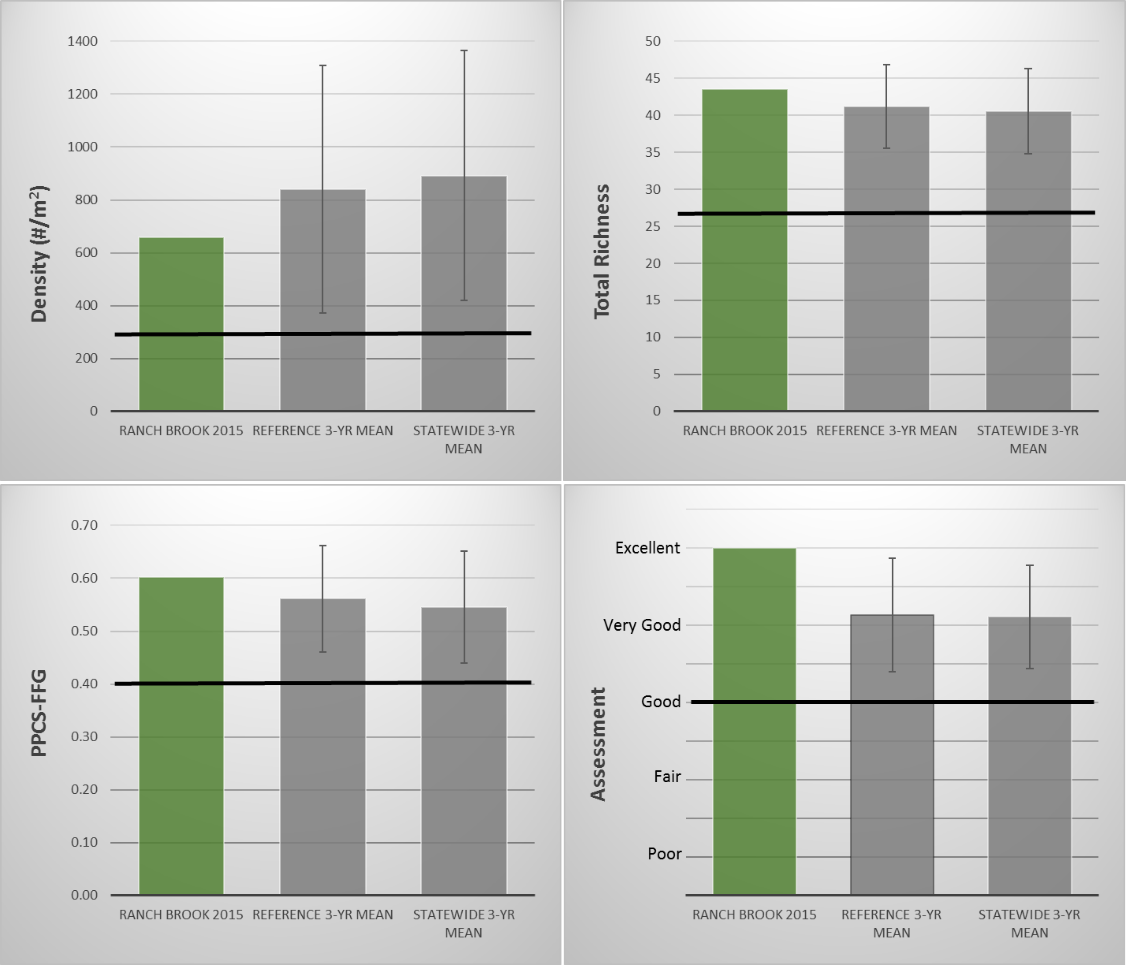 Macroinvertebrate richness has remained very stable over time (Figure 25). Ranch Brook is the only stream that DEC has frequently sampled twice during our index period; both in late summer/early autumn (before September 15th) and again in mid/late October. This consistency in richness holds regardless of what time the sample was collected.

In last year’s annual report, we showed that density has been quite variable over time, and has an inverse relationship with peak discharge. The four highest annual peak discharges since 2000 have occurred over the last five years, and decreased densities have corresponded with lower than normal assessment ratings. It appears that biological condition may have finally rebounded fully after two relatively low flow years.

Metrics aggregate community data, and most tend to show little variability over time at reference sites like Ranch Brook. To get an understanding of how taxon populations within the communities change, it is necessary to analyze the raw data. Figure 26 shows a multivariate ordination plot using densities of individual taxon populations in each sample. The distance between samples shows the degree of basic community similarity (i.e. samples close together have similar populations of taxa). Axes represent inter-correlated combinations of 20 environmental variables, with red vectors showing which abiotic factors have the strongest relationship with these axes. These vectors “point” toward the community samples which are mostly strongly influenced by those habitat variables.

Of all the environmental variables analyzed, the strongest factors shaping stream communities in Ranch Brook were found to be the number of days into the biomonitoring index period the sample was collected, and the quantity coarse particulate organic matter (CPOM) present. CPOM quantity is highly indicative of the amount of fallen leaves dropped in the stream, which tends to increase dramatically by late autumn. Most samples taken in late October with high CPOM fall in the lower left side of the plot. Annual peak discharge and median discharge in the previous 30 days were also very important in influencing communities. Community samples shaped by high flows generally fall in the lower right portion of the plot. 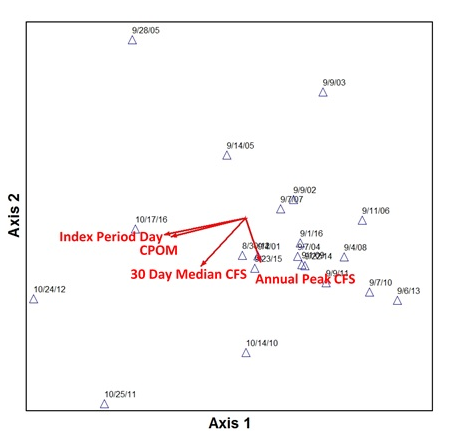 Figure 26. Canonical correspondence analysis (CCA) ordination plot. Biological samples are represented by triangles. Samples grouped near each other have more similar communities, and are shaped more strongly by the abiotic factors represented as red vectors.

Even though overall biological condition at Ranch Brook is consistently high over time, environmental and habitat factors are influencing what taxon populations are present in any given year. It makes sense that flow would be an important factor in shaping communities. In this type of reference stream, other variables related to water chemistry and substrate particle distribution may not be expected to change significantly over short time periods. Flow and temperature may respond more dramatically to climate change, though DEC has only been measuring temperature at Ranch Brook for the last 12 months.

It is an important finding that the timing of sampling is a major factor in the presence and abundance of taxa in these communities, though perhaps not surprising. The mid to late October samples were all likely collected after leaf fall. As autumn progresses, the resource base for macroinvertebrates shifts more heavily to a community based on breaking down leaf detritus. This is indeed what we see at Ranch Brook, with the leaf shredding insects increasing later in the season, and similarity to normal functional feeding group distribution in reference streams decreasing (Figure 27). This kind of seasonal community shift could confound our ability to fully understand how taxon populations are changing over longer periods of time as a result of climate change. These results suggest that it is important to consistently collect biological samples at sentinel sites at roughly the same time every year. Collecting biological samples at sentinel sites at both the beginning and end of DEC’s fall index period might provide even more valuable data on how macroinvertebrate populations are affected by climate change variations in flow and temperature.

Figure 27. Relationship between functional feeding group variables and the number of days into DEC's fall index period that the biological sample was collected. PPCS-FFG is one of the eight metrics used to assess biological health, with the black line representing minimum acceptable criteria. 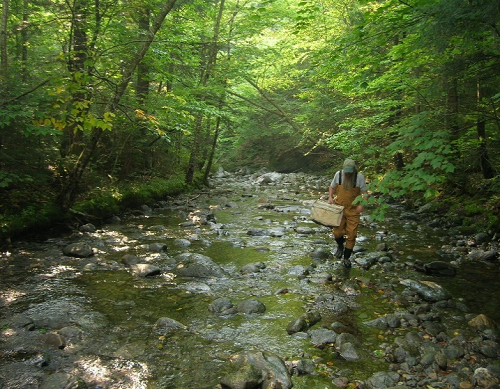 It appears that biological condition may have finally rebounded fully after two relatively low flow years.