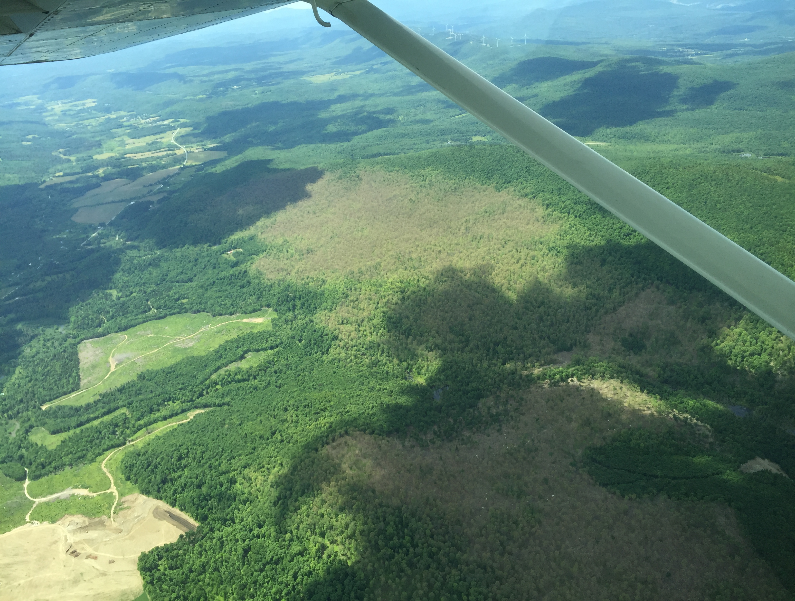 The Vermont Department of Forests, Parks, and Recreation (VT FPR) and the US Forest Service conduct aerial surveys annually to map the extent and severity of current year forest injury. This type of landscape scale assessment complements plot-level field assessments of forest condition and has proven useful in detecting new health issues.

While more complete results of the 2015 Vermont sketch mapping effort can be found in the 2015 report on Forest Insect and Disease Conditions in Vermont (VT FPR, 2015), here we provide the long-term context for understanding the severity of forest injury in 2015 and trends worth watching.

Forest health aerial surveys have been a part of Vermont’s overall forest health monitoring program for about fifty years. Statewide data are collected by the VT Department of Forests, Parks, and Recreation, while the US Forest Service collects data over the Green Mountain National Forest and other federal lands.

Surveys are aligned with US Forest Service Forest Health Monitoring Program survey methods and reporting standards. In addition to maps of forest damage, polygonal delineations include information on the cause, extent, severity and type of forest damages. In most years, this includes assessments covering the entire state (over 2.5 million hectares). While aerial detection surveys have been conducted for over 50 years, for this report, we limit the long-term analyses to the period from 1995 to 2015 due to inconsistencies in earlier digital survey data.

Aerial surveys provide the benefit of long-term statewide coverage. However, the user must recognize there are also limitations to the method. All data is acquired at speeds of over 100 mph and sketched onto maps. It is subject to variations due to weather, observers, and program priorities. Because subtle canopy damage is not visible from an airborne platform, it does not capture small scale disturbance or more subtle decline symptoms. 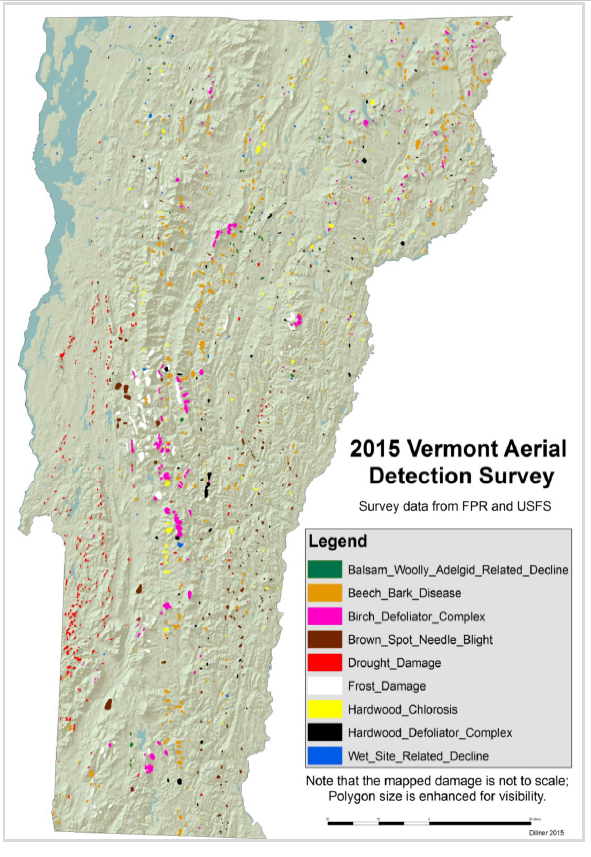 The non-native pest complex, beech bark disease, accounted for the largest mapped decline, with dieback attributable to the disease affecting more than twice as much area this year as compared to 2014. Weather was also a major driver of mapped damage, particularly impacts of a late frost on maples (7,964 hectares, 19,680 acres). Wetter conditions following a dry spring allowed Septoria on birch to establish, with 7,883 hectares (19,481 acres) of damage mapped.

Major defoliating insects did not reach outbreak levels, though an increase in light forest tent caterpillar defoliation was observed across the state. Red pine mortality increased significantly in 2015, and the red pine scale was detected for the first time in Vermont. White pine needle diseases increased again, with 4,544 hectares (11,229 acres) mapped as compared to 2014 (2,012 hectares, 4,972 acres). However, the extent of damage was likely much larger than the mapped area due to the difficulty of detecting damage in late summer.

NOTE: Due to minor corrections to earlier tabulations of polygon areas, the calculated areas reported here differ from those reported in FPR’s 2015 Insect and Disease Conditions Report.

While 2015 was a relatively healthy year for most species, the temporal data set allows us to look at long-term trends and to identify the most chronic stress conditions. Summing all damage types shows substantial year to year variability (Figure 5). Since 2005, total mapped damage area has generally declined. Although more damage was mapped in 2015, it is still below the long-term norm for the dataset. This trend may reflect the influence of ample growing season precipitation over most of the past ten years. However, if the extremely high 1998 ice storm damage year is excluded the yearly surveys show more consistent damage over time with no clear decreasing trend. 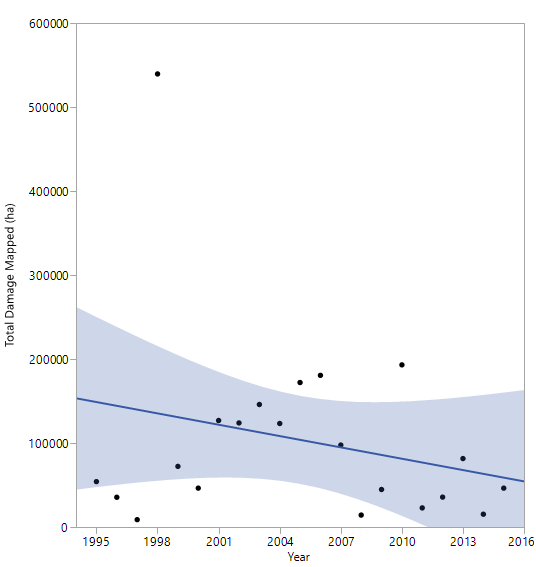 Figure 5. Total area (in hectares) of damage mapped during statewide aerial surveys between 1995 and 2015 with the 95% confidence intervals shaded in blue. The trend shown here of decreasing damage extent is driven largely by extensive ice storms in 1998.

Long-term analyses of the five primary damage types recorded in the aerial survey data show that high year to year variability dominates (Figure 6). Branch breakage, caused by the 1998 ice storm, was the most extensive damage type. In most other years, defoliation and discoloration were most widespread, but the agents that cause leaf damage have varied, including drought (2001), leaf fungi (2003 and 2013), forest tent caterpillar (2004-2006), and frost (2010). Dieback and mortality, the most severe damage types in terms of tree health, have been at low levels, particularly in the past five years. Performing a linear regression on dieback alone demonstrated a marginally significant decreasing trend in mapped area over the 21-year record (p = 0.08).

Annual fluctuations of select damage agents are shown in Figure 7. The decrease in dieback after the early 2000’s (when there had been a period of dry years), coincides with a decrease in drought damage, hardwood decline and beech bark disease. The incidence of beech bark disease has dropped to almost a third of its peak levels. Anthracnose and forest tent caterpillar had peak years when they caused substantial damage, while birch defoliation has continued to fluctuate. 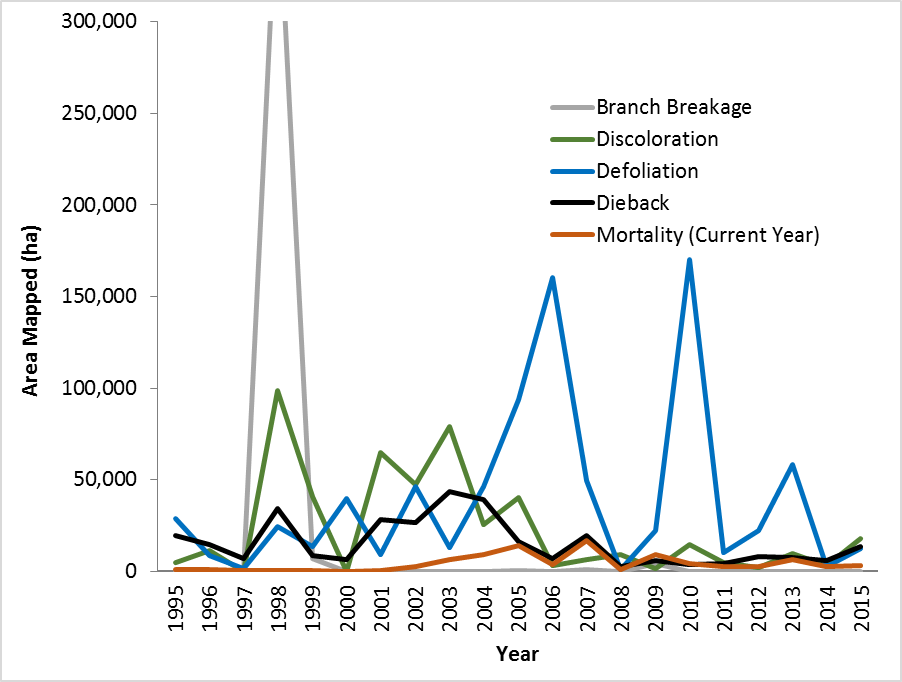 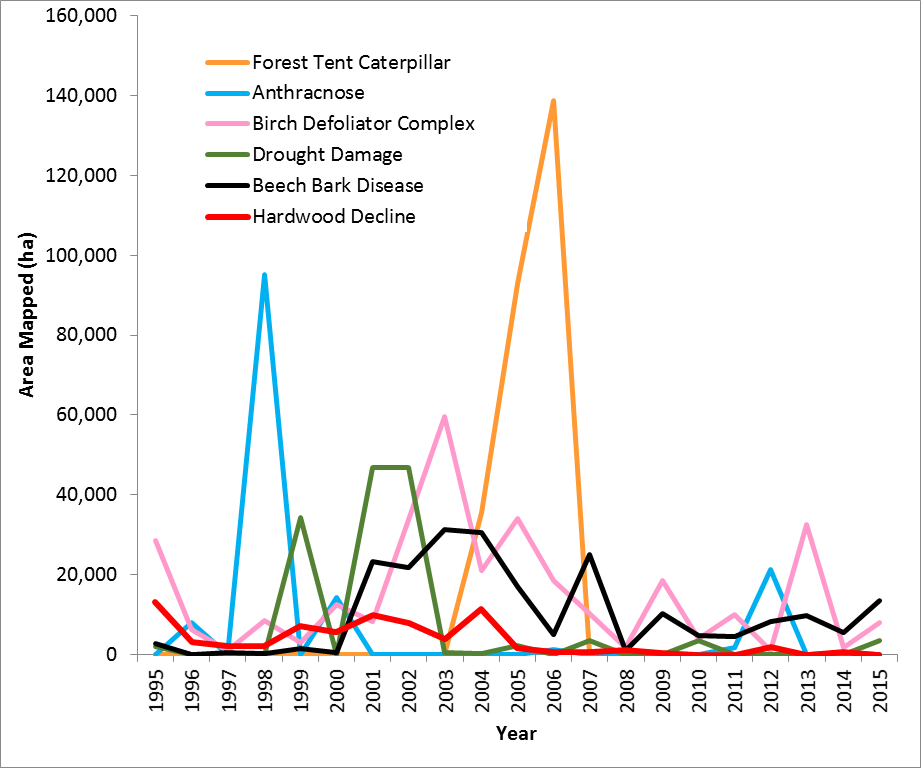 Figure 7. Temporal trends in select damage agents mapped during statewide aerial surveys between 1995 and 2015.
Table 2. Damage agents that were mapped in at least four different years between 1995 and 2015, including the number of years that the damage was detected and mapped, the total area mapped over the 21- year period, and the maximum number of hectares mapped in a single year. 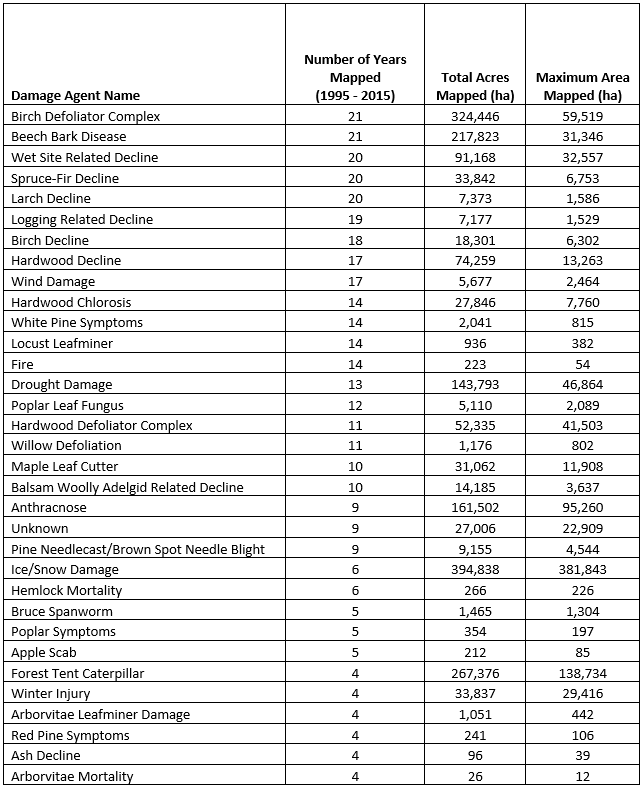 When the maximum extent of damage caused by specific damage agents is compared to number of years they were mapped, damage agents fall into three categories (Figure 8). Many cause only limited impacts; they occur infrequently and cause little damage (MINOR). Some have a locally important impact, occurring in many or most years, but rarely causing damage over a wide area (CHRONIC). Many chronic damages are related to site characteristics that may predispose them to decline, as in drought. Others are endemic pests, like birch defoliators and beech bark disease, that are host-specific, and cause repeated impacts only where their hosts are present and susceptible. The final group is infrequent but wide extent damage agents (EPISODIC). Some of these are directly related to weather events, like ice or frost damage. Others are biotic: insects with irruptive population cycles or fungal diseases that build up after repeated wet weather. These should be considered conceptual groups, as specific damage causing agents would be classified differently if another time period was examined.

No agents caused repeated, extensive damage on an annual basis. Several episodic stress events covering a broad area were mapped, affecting up to 20% of Vermont’s forestland. Of the agents that were mapped frequently, none exceeded 3% of the state’s forest in a single year. However, some of the damages may be having a significant impact on individual hosts. For example, birch defoliation was mapped during each of the 21 years, affecting nearly half the birch forest type in Vermont at its peak. 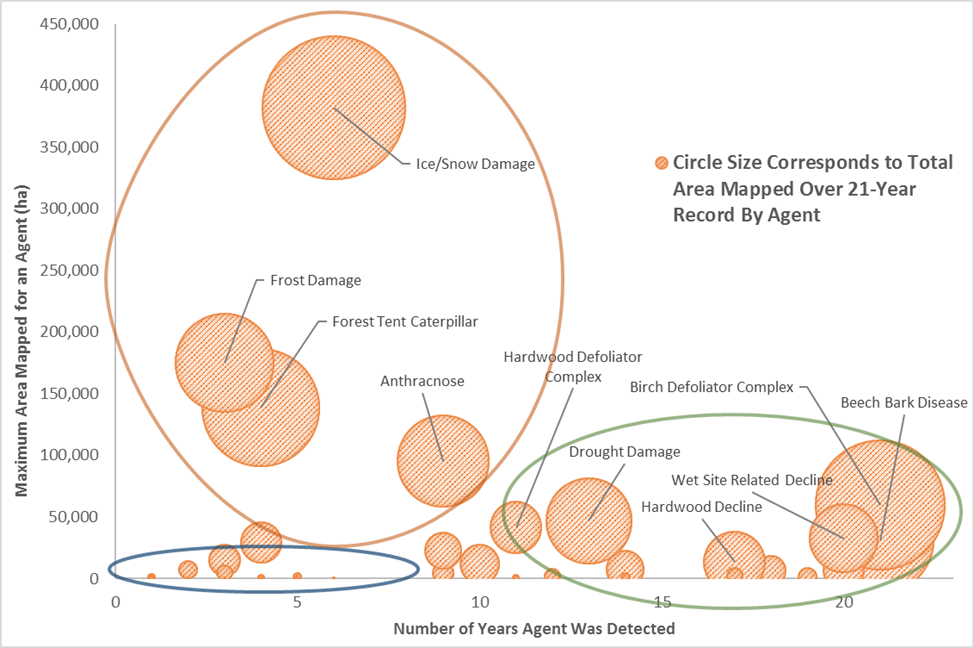 Figure 8. Mapped data points of the 58 different damage agents detected between 1995 and 2015. Damage agents are plotted by frequency of detection versus maximum extent mapped during aerial surveys, with point size corresponding to the total area recorded for that agent over the twenty-one-year period. The larger circles identify groupings of points into the MINOR (blue), CHRONIC (green) and EPISODIC (orange) categories described in the text.

Aerial surveys provide the longest statewide annual record of stressors faced by Vermont’s forests. Over the past 21 years, only limited areas of dieback and mortality and relatively low levels of total damage have been mapped. This reflects a relatively low occurrence of moderate or severe forest decline.

Agents that repeatedly cause extensive damage would be more likely to have significant impacts on ecosystem health, as has occurred recently in the western US, where an increase in bark beetles has caused substantial conifer mortality. In Vermont, several insect, disease, or weather-caused damages were mapped over a large area, but none were widespread for more than three years. However, annual damage to individual species, such as birch and beech, are cause for concern.

Fifty-eight different causes of damage were mapped, reflecting the complexity of Vermont’s forests. Many pests and abiotic events are episodic, so a number of stressors which have historically occurred in Vermont were uncommon or not detected in this 21-year period. Many have the potential to cause widespread damage and leave the state’s forests vulnerable to decline and mortality should they reemerge.

Moving forward, maintenance of long-term monitoring will be essential. Several invasive insects and diseases have been detected close to Vermont’s borders. Under a warming climate, increases are expected in extreme weather events, such as ice storms, wind, drought, and flooding, and in defoliator outbreaks. Annual aerial surveys will provide critical information about the impact of these stressors on the forest and help inform resource management.

Mapped damage area in 2015 remained relatively low (< 3% of the state) but increased threefold over last year. The episodic nature of the most severe damage agents and increased intensity and frequency of disturbance predicted with climate change highlight the importance of ongoing monitoring.