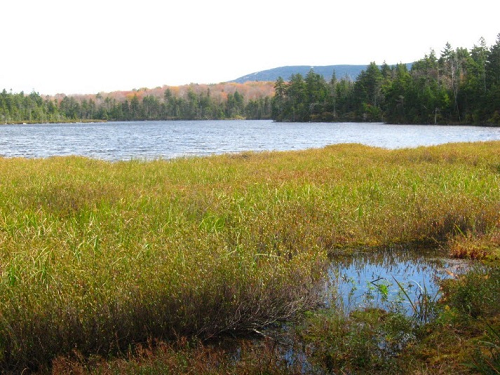 During the 1980s, the chemistry of lakes was surveyed throughout Vermont. Concern was mounting that remote, high-elevation lakes in geologically sensitive areas were either already acidified or risked acidification due to the long distance transport of atmospheric pollution. Initial monitoring within the southern Green Mountains indicated that this region of Vermont was especially sensitive to acidification and that a high proportion of the undeveloped lakes were notably acidic. In 1993, the VMC partnered with VT DEC to continue monitoring in the Lye Brook Wilderness on Branch and Bourn ponds. Acid lake monitoring in Vermont is funded by the US EPA's Long Term Monitoring Program (LTM), which supports VTDEC's work to sample 12 acidic lakes throughout Vermont, including Bourn and Branch ponds.

Table 10. Data from Bourn and Branch Ponds, epilimnion values only. 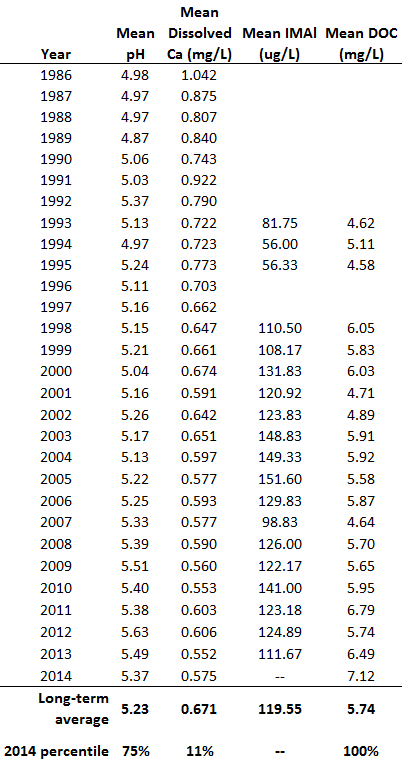 Long-term water chemistry monitoring has been carried out at two acid-sensitive lakes in the Lye Brook Wilderness area since the 1980s. The ponds, Bourn and Branch Ponds, are approximately 9.0 and 12.0 meters deep respectively, dark colored, with low pH and stratification in the spring and summer. Samples are collected three times a year in the spring, summer and fall, using a Kemmerer water sampler, at 1 m from the surface and 1-2 m from the bottom in the summer when the lake is stratified. Measurements include field pH, lab pH, secchi transparency, temperature, true color, apparent color, gran alkalinity, specific conductance, as well as concentrations of calcium, magnesium, sodium, potassium, aluminum (both speciated organic monomeric, and total dissolved), nitrate, sulfate, chloride and dissolved organic carbon (DOC). The methods of collection, processing and analysis have remained consistent for nearly 30 years, with one exception - the lab previously processing inorganic monomeric aluminum (IMAl) closed, and the new lab generated numbers that are not yet comparable to the previous assays. For this reason, we exclude discussion of IMAl this year. For this year's analysis, we focus specifically on measurements from the epilimnion, the uppermost layer in a thermally stratified lake, here defined as depths up to and including 1 meter. 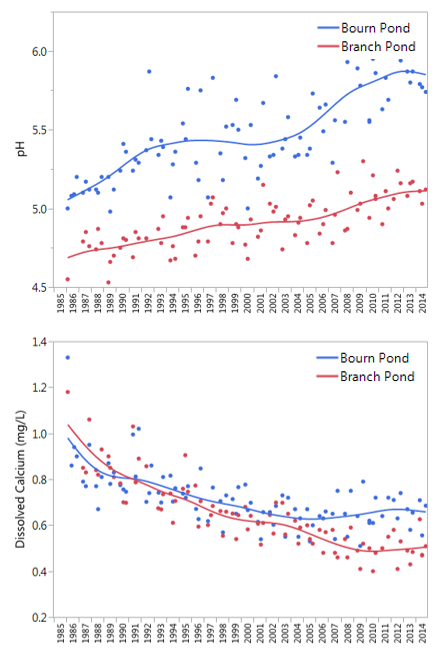 Figure 36. The ecological benefits of long-term increases in pH (top) are offset by decreases in dissolved calcium (bottom, mg/L) at the long-term acid lake monitoring sites.

Water quality at Bourn and Branch Ponds in 2014 largely follow the same patterns observed in 2013, and over the long-term record (Table 10). While slightly more acidic than 2013, both mean pH and dissolved organic carbon values remain some of the highest recorded over the near 30 year record. This is consistent with lake measurements made across the Northeast, all showing reduced acidity (higher pH) and increased DOC. Possible explanations for these changes range from increased organic matter solubility in soils (Monteith et al. 2007, SanClements et al. 2012) to increased CO2 in the atmosphere and reduced atmospheric inputs. However, there is no conclusive cause identified thus far. Dissolved calcium concentrations in 2014 were slightly higher than 2013 but still among the lowest values recorded (11th percentile), continuing a long, steady decline in this critical base cation.

There are several striking trends in Vermont's acid lakes, most notably an increase in the yearly mean pH from its low of 4.87 in 1989 on Branch Pond (Figure 36, top). This is consistent with lakes around the region which show steady increases in pH since the passage of the 1990 Clean Air Act Amendments. While this improvement continues to be strongly statistically significant (p<0.001), pH remains critically below levels necessary to expect a biological response (bench marks for healthy aquatic ecosystems are pH > 6.0). Limits on biological improvements are also likely due to the decline in available base cations, specifically calcium, a nutrient essential to the development and reproduction of fish and macroinvertebrates. At levels already below healthy benchmarks (calcium> 2.5 mg/L) availability of base cations remains a critical limitation to biological recovery in these systems (Figure 36, bottom). One bright note is that the decrease in calcium appears to have leveled off in Bourn Pond (since 2005) and Branch Ponds (since 2010). 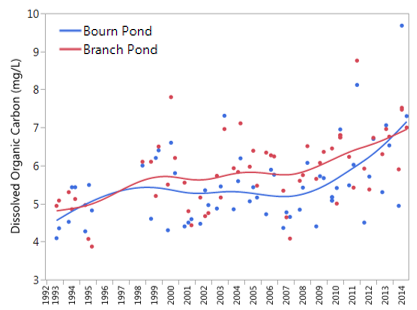 Dissolved organic carbon levels have been increasing at both Bourn and Branch Ponds (Figure 37), which could aid in biological recovery through increased microbial food availability and reducing bioavailability of certain metals. Specifically, DOC mediates the impacts of the toxic inorganic monomeric aluminum to biota, and can speed conversion of toxic aluminum to organic forms beyond what is expected solely from decreased in acid deposition (Lawrence et al. 2013). However, while IMAl data was not available this year for addition to the trend analysis, findings from last year still hold - the rate of increase in IMAl has exceeded the rate of increase in DOC over the 20 year duration of monitoring efforts for those quantities. These disparate rates could present limitations to future biological recovery.

Federal mandates under the Clean Air Act require Class I Wilderness Areas (like Lye Brook) to protect air-quality and related ecosystem values. The data collected at these water bodies provides one line of evidence with which to monitor and document the ecological impacts of both atmospheric pollution, and the policies meant to limit such impacts.

Acid-sensitive lakes have improved significantly since the 1990 Clean Air Act Amendments. But, because of the loss of calcium and magnesium throughout the watershed and in the lake itself, sensitive fish, snails, and insect species will not recover until further reductions in sulfur and nitrogen occur. Increases in dissolved organic carbon will aid in biological recovery as this weak organic acid binds with the toxic form of aluminum. In addition, time is needed to allow bedrock and soils to resupply calcium and magnesium to the lakes through the weathering process.

Analysis of air and water quality by means of chemical and biological inventories on these sensitive lakes will be maintained. Monitoring the lakes in Lye Brook Wilderness can be used to document trends resulting from emission reductions required by the Clean Air Act, but also to identify any potential new sources of stress or pollution, such as climate change. Such indicator trends are being used to inform management targeted towards the recovery of these water bodies. 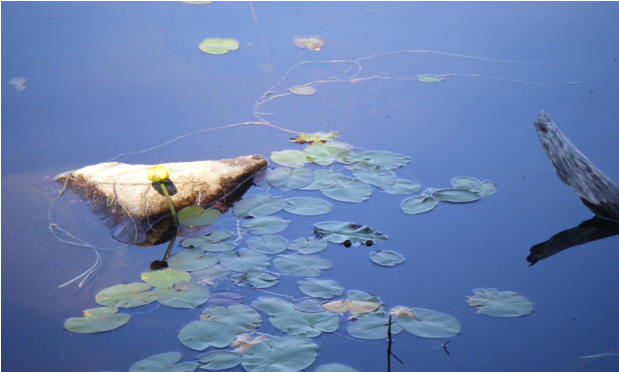 While improvements in the acidity of high elevation surface waters are promising, a legacy of decreased base cations and increased toxic aluminum levels indicate that biological recovery remains uncertain.