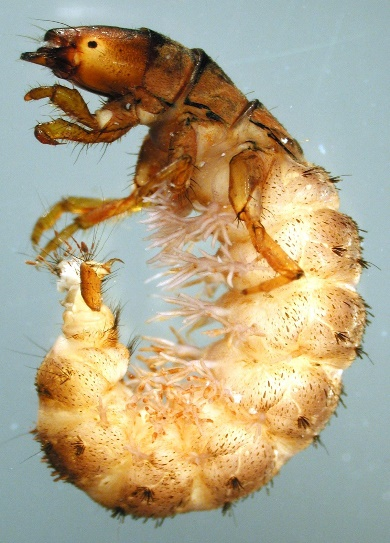 Parapsyche apicalis, a filter-feeding caddisfly seen here in its larval stage, is an indicator of good water quality.

The Vermont Department of Environmental Conservation (VT DEC) is conducting long term monitoring of approximately ten "sentinel" streams in Vermont. Sentinel streams are widely variable in terms of size (4.6 -510 km2), elevation (33 m – 585 m) and geographical separation. The one thing they have in common are relatively undeveloped watersheds that have not experienced heavy impact from anthropogenic activity. Five of these sites are currently gaged for stream discharge, either by VT DEC or by the USGS. All ten streams are currently being monitored on an annual basis, with the data that is being collected used to track trends in water quality, macroinvertebrate and fish communities, physical habitat, and water temperature. One of the longest running sentinel monitoring stations is at Ranch Brook near Stowe, VT. With a drainage area of 10 km2 and an elevation of 378 m (1240 ft), it is one of the smallest and most pristine reference streams. By focusing on these types of reference streams, VT DEC hopes to be able to observe long term impacts related to climate change, allowing eco-regional level alterations from localized watershed anthropogenic impacts to be factored into biological expectations on reference streams.

With a continuously operated USGS gage and annual monitoring by VT DEC since 2000, Ranch Brook has one of the best data sets in the state for pairing biological condition with stream hydrology. Continuous stream discharge data is available from the USGS gage, in addition to summary information, including daily mean and annual peak discharge. VT DEC collects macroinvertebrate community samples during an annual index period that runs from September 1st through mid-October. Samples are collected from riffle habitats, and sorted and identified in the laboratory. VT DEC biologists use a number of community variables (called metrics) to assess stream health. Metric values are compared to established thresholds determined from historical statewide data. Three of the metrics that VT DEC uses to assess biological condition are macroinvertebrate density, total richness, and Ephemeroptera-Plecoptera-Tricoptera (EPT) richness. Density is a general measure of community productivity, but can also provide information on water quality and habitat stability. Total species richness provides a measure of overall stream biodiversity, while the richness of the insect orders Ephemeroptera, Plecoptera, and Trichoptera (EPT) indicates the diversity of macroinvertebrates that are particularly sensitive to water quality stressors.

Macroinvertebrate density at Ranch Brook in 2014 was 346 individuals per square meter, higher than VT DEC's minimum biological standard for a healthy Vermont stream, which is set at 300. Moderately low densities are indicative of a low productivity habitat (i.e. low nutrient concentrations and algae growth), and are typical in small, high gradient mountain streams. However the abundance at Ranch Brook is about two to three times lower than that found at similar sized streams sampled throughout Vermont over the last three years, including other small sentinel streams.

Total species richness (45.5) and EPT richness (26.5) at Ranch Brook were very high compared to the State's minimum biological criteria (27 and 16, respectively), and slightly higher than the average for other similarly sized streams over the last three years (Figure 29). 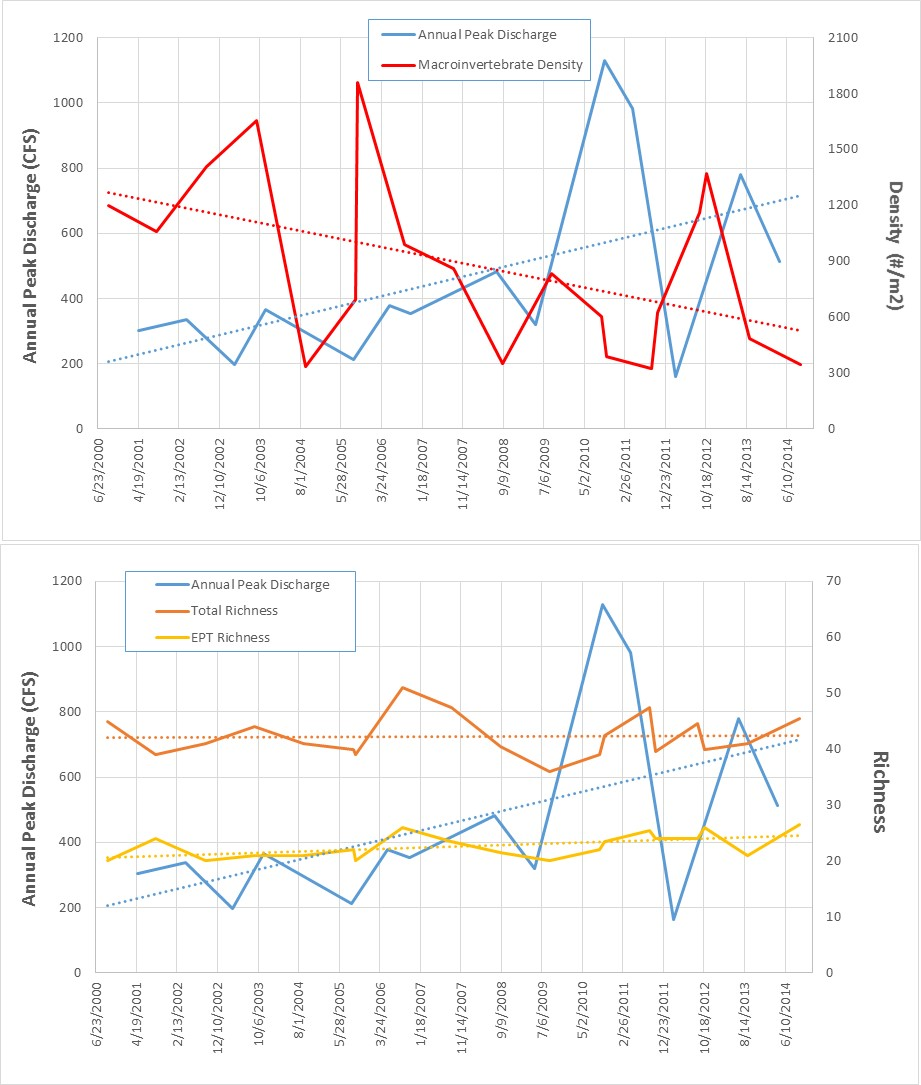 Annual peak discharge during each water year (October – September) at Ranch Brook shows a great deal of variability, and an interesting trend since 2010 when compared to earlier years of record (Figure 30). Four of the top five highest annual discharges have occurred since 2010. 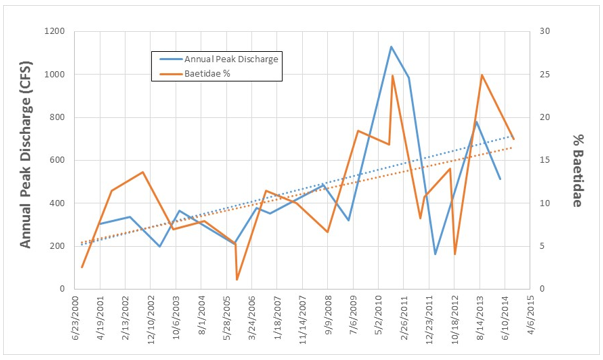 Figure 31. Comparison of annual peak flows at Ranch Brook in Stowe, VT, with density of Baetidae (Ephemeroptera) populations. Baetidae are early colonizers that often increase in abundance after disturbance events.

When this hydrological variability is plotted against macroinvertebrate density, it seems apparent that organism abundance is responding to recent high peak flows (Figure 31). Most of the highest recorded densities were early in this period of record, with notable exceptions in 2004 and 2005. Beginning around 2008, we see that densities are generally depressed in years when sampling followed a high annual peak discharge. The highest densities during this time period were recorded in 2009 and 2012, years with low peak discharges. Trendlines plotted through this data also suggest an inverse relationship over time between these variables.

While density seems to respond dramatically to stream hydrology, total richness and EPT richness do not. Both of these community metrics show low variability, even during recent high flood years. Both measures of diversity are remarkably similar in 2014 compared to values seen up to 15 years ago.

High precipitation events like Tropical Storm Irene and other storms that have affected Ranch Brook in recent years are expected to become more common with our changing climate. These events will lead to more hydrological variability and higher annual peak flows, which in turn scours stream beds and decreases habitat stability.

This data suggests that small, low-productivity mountain streams like Ranch Brook may have a hard time recovering macroinvertebrate abundance in response to increased flood flows. This instability could also have negative effects on the fish community, either as a direct result of high flow events, or through food web dynamics resulting from lower invertebrate abundance.

Despite recent flow disturbances and lower densities of macroinvertebrates, biological diversity at Ranch Brook is being maintained at exceptional levels. Further research at Ranch Brook and other sentinel sites will provide insight as to whether this resilience in diversity can be maintained in the long term. VT DEC intends to look at how other aspects of the macroinvertebrate community may be changing, too. For example, some members of the mayfly family Baetidae are considered "early colonizers", and often respond to habitat disturbances by increasing their proportional abundance. Trends at Ranch Brook suggest that this population has followed the hydrological trends and grown more dominant in recent years. Further investigation will help determine which populations may be more tolerant or sensitive to climate-related changes in stream temperature and hydrology.

In sum, density is most responsive community metric to flow variation, while species richness and EPT are not altered, and Baetidae often rapidly recover compared to other taxa resulting in their dominance of a community following high peak flows. There will be more that we can add to this story in coming years. 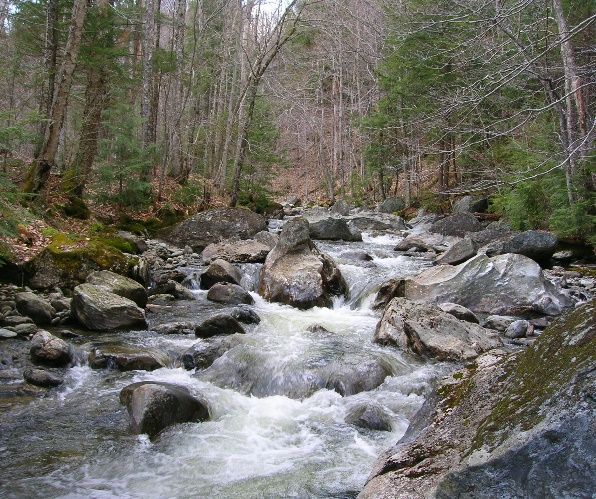 Macroinvertebrates in small, low-productivity mountain streams may have a hard time recovering in response to increased flood flows.