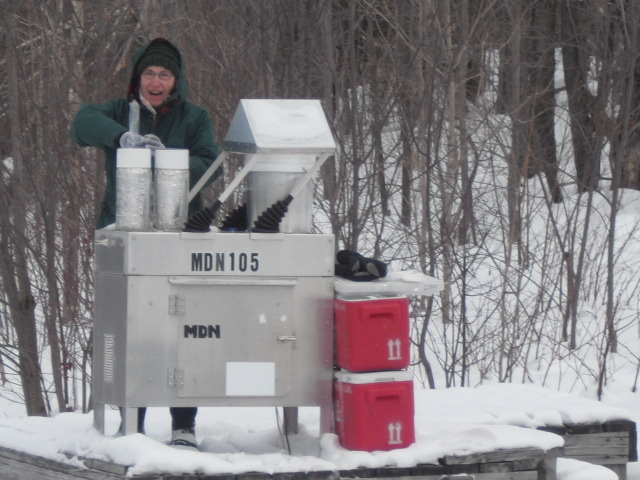 Mercury is a persistent pollutant that can accumulate in organisms as it moves up the food chain, leading to neurological damage, lowered reproductive success, motor skill impairment and hormonal changes in humans and animals (Driscoll et al. 2007, Evers et al. 2004). Human activities such as fossil fuel burning and waste incineration elevate levels of atmospheric mercury, which is later transferred to forests and waterbodies through both dry and wet (in precipitation) deposition. Since 1992, VMC has been collecting data on both wet and dry mercury deposition and the mechanisms of mercury cycling, making it one of the longest records in the U.S. In 2004, the VMC joined the Mercury Deposition Network (MDN, part of the National Atmospheric Deposition Program) as one of over 120 sites in the US and Canada. The VMC air quality site serves as a sentinel site for the northeast coast of the continent – it is high enough in elevation to detect regional mercury transport events that are not detected by other stations. This very long record has provided context to many shorter-duration studies, including the way mercury cycles through the forest canopy, how mercury bio accumulates in birds and amphibians, how mercury levels are influenced by elevation, and how falling leaves contribute to deposition. VMC and its partners have committed to this long-term monitoring in order to document and better understand the input of mercury into Vermont's forested ecosystems and the inhabitants of those ecosystems, including birds, fish, bobcats and human beings.

VMC conducts year-round sampling of precipitation chemistry at the air quality monitoring site at the Proctor Maple Research Center in Underhill, Vermont. Weekly composites of precipitation are gathered in an automated wet-only precipitation collector at the site. The collector opens automatically when rain or snow is detected, capturing precipitation through a funnel and tube sampling train into a bottle charged with hydrochloric acid (to better preserve the sample). The collector is heated in the winter and vented in the summer as needed. Samples are collected every Tuesday and shipped to the Mercury Analytical Laboratory at Eurofins Frontier Global Science, Inc. in Bothell, WA for analysis of mercury content and cleaning of the sampling train. Data are submitted to NADP for quality control and posted on the NADP/MDN website (http://nadp.isws.illinois.edu/data/MDN/). 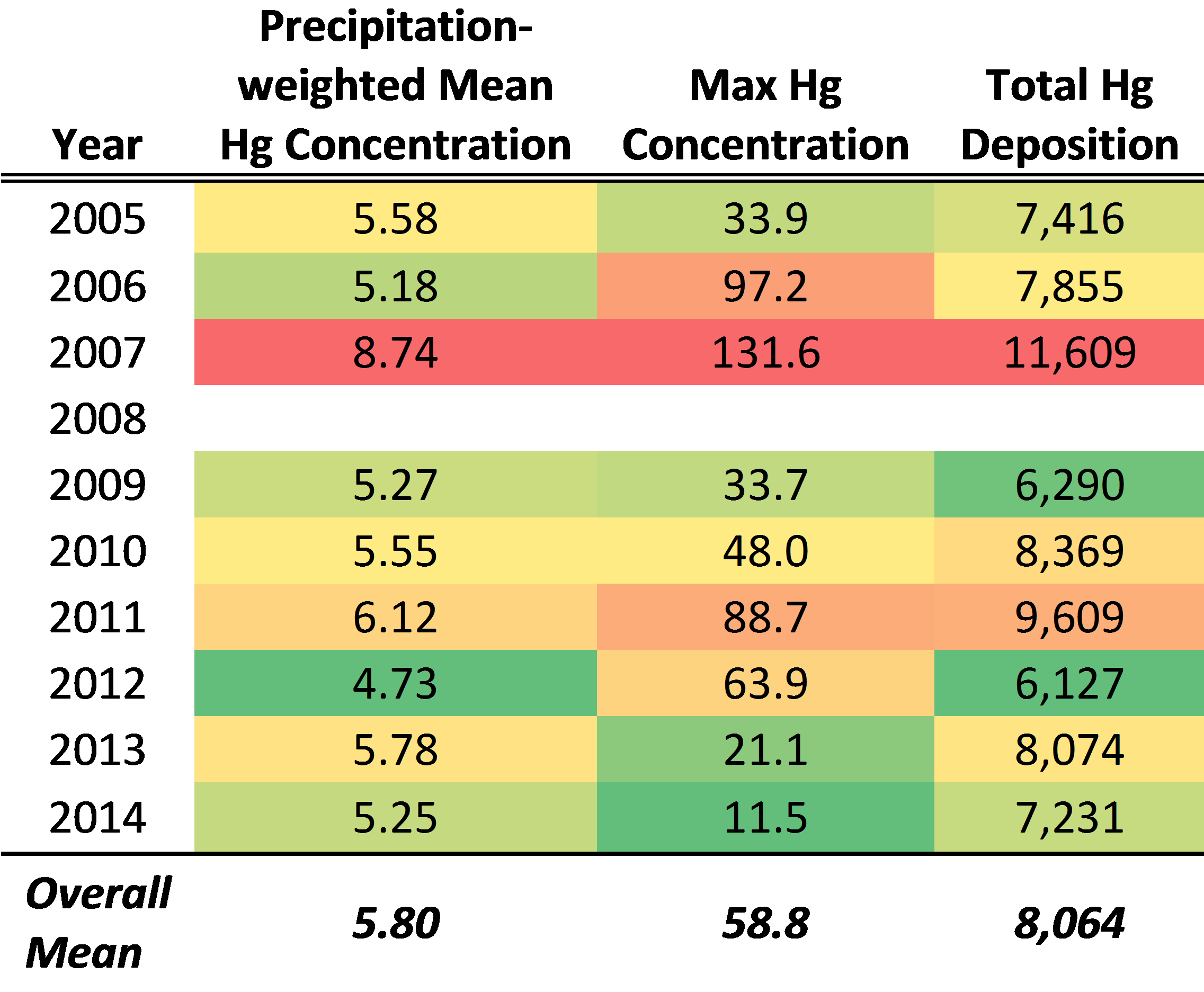 Mercury monitoring at VMC's air quality site (VT99) for 2014 shows lower deposition than on average for the 10 year record (Table 4). However, 2014 was still well above the lowest years on record (2009 and 2012). Over the entire record for VT99 total mercury deposition fluctuated from a high of 11,609 ng/m2 in 2007 to a low of 6,127 ng/m2 in 2012. Similarly, the precipitation-weighted mean mercury concentration and the maximum mercury concentrations measured at VT99 do not exhibit any clear trend, although for 2014, both were below the mean for the entire record. It is unlikely that a downward trend will appear until the hotly contested EPA rules concerning mercury are put in place. 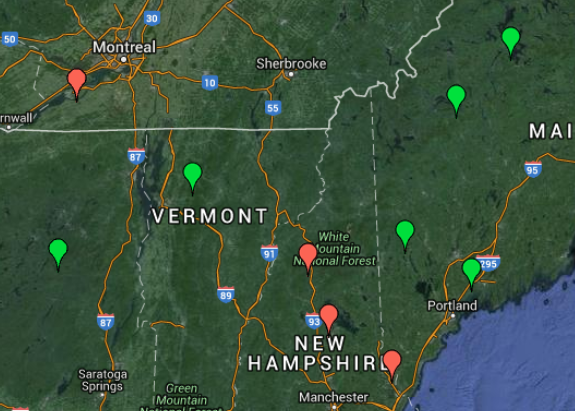 Figure 14. Of the 9 US Hg monitoring sites across the region from the Adirondacks to central Maine, only six remain in operation today (closed sites in red). Inset: Regional deposition totals for 2014 (NADP 2014, except those with asterisks which were calculated by VMC).

Figure 15. Long-term trends in Hg concentration and total Hg deposition for all precipitation events at the VT99 MDN site.

Examination of the full data record at VT99 suggests that Hg deposition has decreased from the peak deposition in the mid- 2000's, though variability remains quite high. Since Hg deposition and concentration measurements began at VT99 in 2004, there has been no statistically significant trend, either increasing or decreasing (Figure 15). While the severity of spikes in both Hg concentration and total Hg deposition are lower than measured in previous years, a higher baseline average for most precipitation events has the tendency of slightly (although not significantly) increasing deposition rates in recent years.The higher elevation of the VT99 site makes it more sensitive to regional transport events, which may partially explain why the data is so highly variable – one week receiving a regional pulse, the next week not.

Table 5. Percentiles provide a comparison to the larger national MDN network. This percentile value represents the proportion of MDN sites reporting total Hg deposition values below VT99. Over the 10 year monitoring at VT99, mean annual deposition is higher than 57% of national MDN sites. 2014 was a relatively good year for VT99, with only about a third of MDN sites recording lower mean Hg deposition. 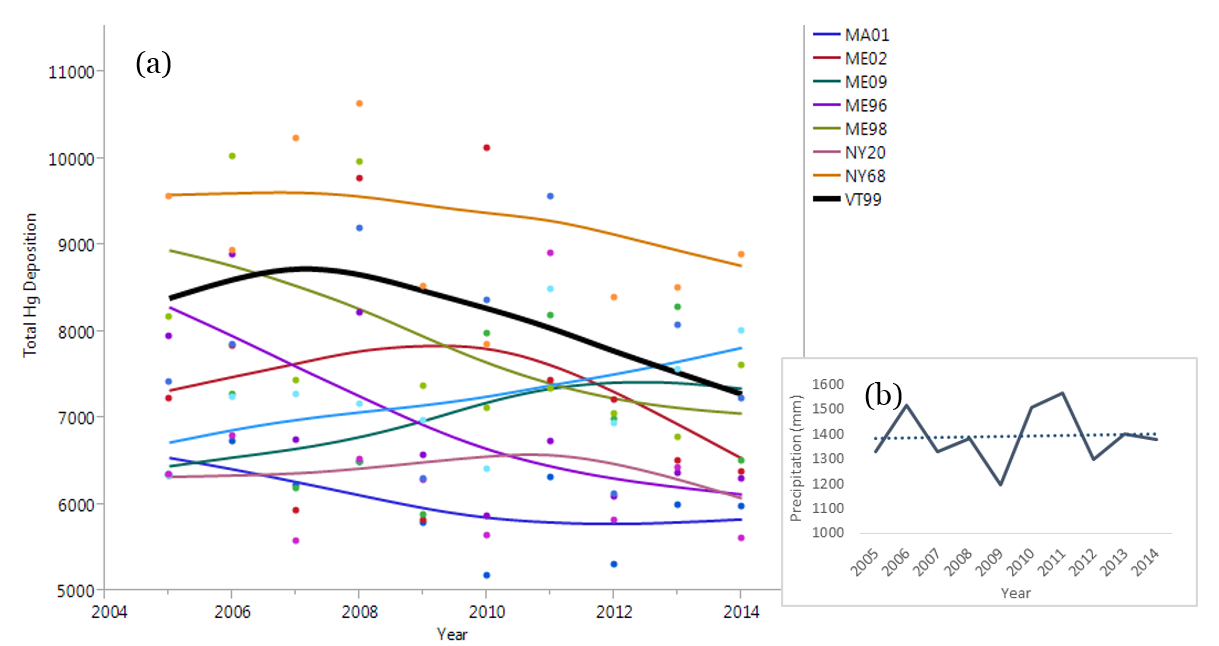 Figure 16. Total Hg deposition (a) in ng/L by year for northeastern MDN monitoring sites with comparable years of data collection. Note that in recent years Hg deposition has decreased in VT, but still remains among the highest deposition rates in the region. Inset (b) displays the precipitation record at the site, which shows no obvious trend over the same period. 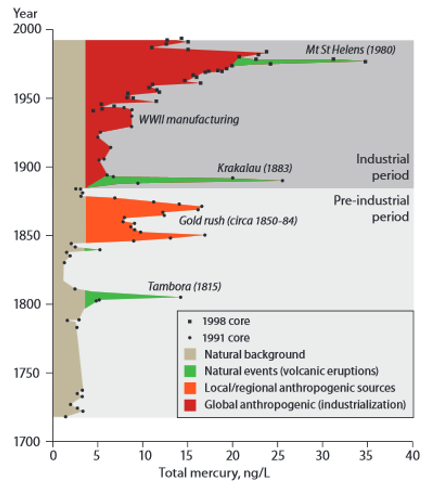 Figure 17. Ice core record of deposition from Wyoming, USA. The elevated levels associated with the 1850-84 gold rush probably reflect local/regional sources rather than a global signature. Increasing levels of environmental mercury associated with industrialization, however, are found in ice cores around the globe.

In the long term, mercury deposition levels decreased dramatically with the enactment of clean air legislation in the late 20th century (Kamman and Engstrom 2002). However, the lack of reduction policies specifically targeting mercury has led to the leveling off of deposition rates in recent years. The absence of a trend in either direction is a good sign for the health of Vermont's forested ecosystems in that there is not an increasing rate of deposition. But because mercury persists in the environment and continues to be cycled through the various storage pools (soils, air, biota) until it is essentially buried under soil, the continued low-level input and occasional spikes will likely drive cumulative increases in mercury in Vermont's forests, which are particularly sensitive to these inputs (Driscoll et al. 2007).

Planetary warming caused by climate change can lead to further complications, among them increasing temperatures that may lead to higher rates of organic productivity in aquatic ecosystems, as well as higher rates of bacterial action which can increase methylmercury production. These events, combined with the thawing of huge areas of previously frozen northern peatlands, may move previously unavailable pools of mercury into global ecosystems, highlighting the pressing need for further limits on and monitoring of mercury emissions from anthropogenic sources (Figure 17) (AMAP/UNEP 2015). The persistence of mercury in the ecosystem and the global nature of mercury pollution make eliminating anthropogenic contributions crucial to lowering concentrations in Vermont and worldwide. 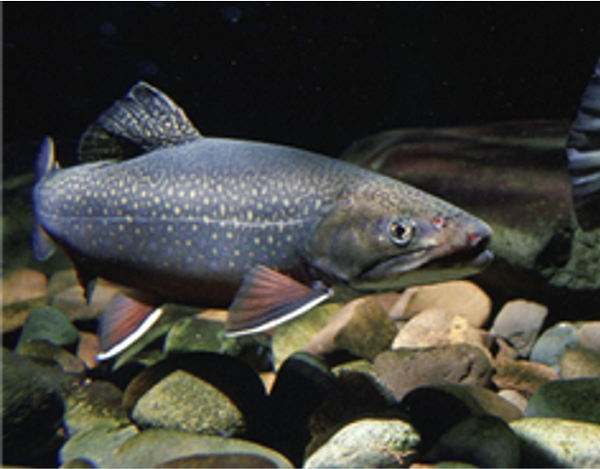 Mercury continues to arrive and build up in Vermont's forests. Several sport fish species accumulate mercury, and many states, including Vermont, have issued guidelines on the number of fish that may be safely eaten to limit mercury exposure in people.