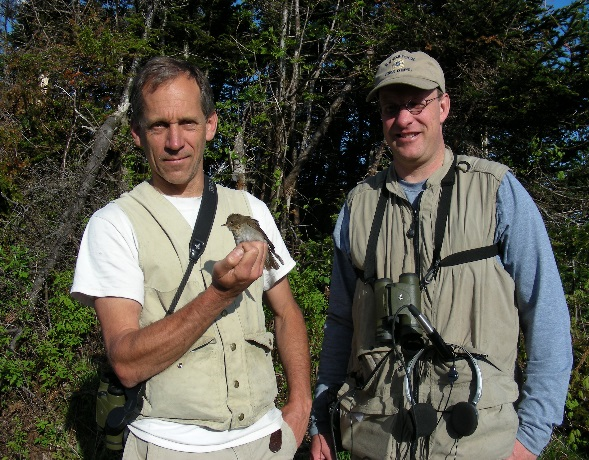 Since the 1960's Vermont has seen the conversion of nearly 7 percent of agricultural land and 14 percent of forest land to urban use (VMC, 2009). These changes in land use, along with associated parcelization and fragmentation of the landscape are recognized as major driving forces affecting species habitats, ranges and population numbers (Wilcove et al., 1998, VNRC, 2007). Anthropogenic perturbations caused by atmospheric pollutants (e.g. elevated mercury in blood and feathers of Bicknell's Thrush (Rimmer et al., 2005, 2009)) and changing environmental conditions add to the pressures on many forest bird species (Audubon, 2014). Species such as Bicknell's Thrush, which overwinter in wet broadleaf forests in the West Indies, are also being subjected to many human-induced perturbations on their overwintering grounds. Regular monitoring is essential to assess trends in species presence, species richness, population levels and demographics. Such information is critical to the conservation of sensitive species.

Breeding Bird Surveys were conducted at permanent study sites located on the Mt. Mansfield ridgeline and in Ranch Brook, in Underhill State Park and at the Lye Brook Wilderness Area (LBWA). These four study sites are part of VCE's long-term Forest Bird Monitoring Program (FBMP) which was initiated in 1989 with the primary goals of conducting habitat-specific monitoring of forest interior breeding bird populations in Vermont and tracking long-term changes (Faccio et al. 1998).

Each study site contains 5 point count stations. Survey methods include unlimited distance point counts, based on the approach described by Blondel et al. (1981) and used in Ontario (Welsh 1995). Counts begin shortly after dawn on days where weather conditions are unlikely to reduce count numbers. Observers record all birds seen and heard during a 10-min sampling period, divided into 2, 3, and 5-minute intervals. Montane fir-spruce sites on Mt. Mansfield were sampled once, while hardwood-dominated sites at LBWA and Underhill were sampled twice during the breeding season. 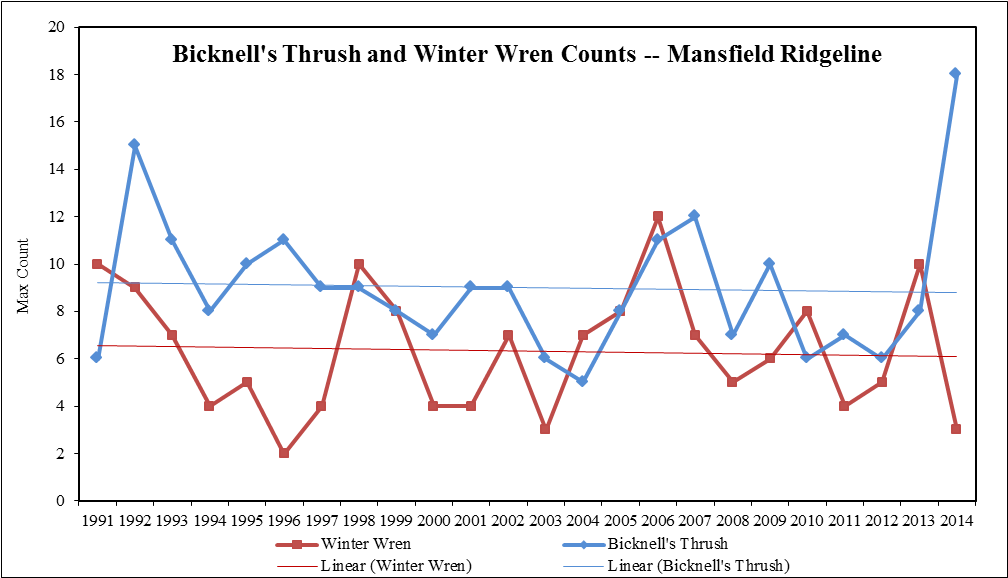 Overall, a combined total of 55 avian species have been detected during breeding bird surveys at three study sites on Mt. Mansfield from 1991-2014. Species richness was similar at both montane forest sites, with a total of 32 species detected at both the Mansfield ridgeline and Ranch Brook. Surveys at Ranch Brook continue to average a greater number of individuals and species per year than the higher elevation and more exposed Mansfield ridgeline site. Surveys at the mid-elevation, northern hardwood study sites at Underhill State Park and Lye Brook Wilderness showed similar species composition, with a total of 47 and 46 species, respectively.

Mt. Mansfield Ridgeline – In 2014, the number of species detected (n=11) rebounded slightly from the previous year record low of just 8 species, while numerical abundance (n=86) jumped dramatically to the third highest in the survey's 24-year history. Of the eight most commonly recorded species, only Winter Wren and Yellow-rumped Warbler were below their 24-year average, and counts of all except Winter Wren increased from 2013, including a record high count of Bicknell's Thrush (n=18) (Figure 24). 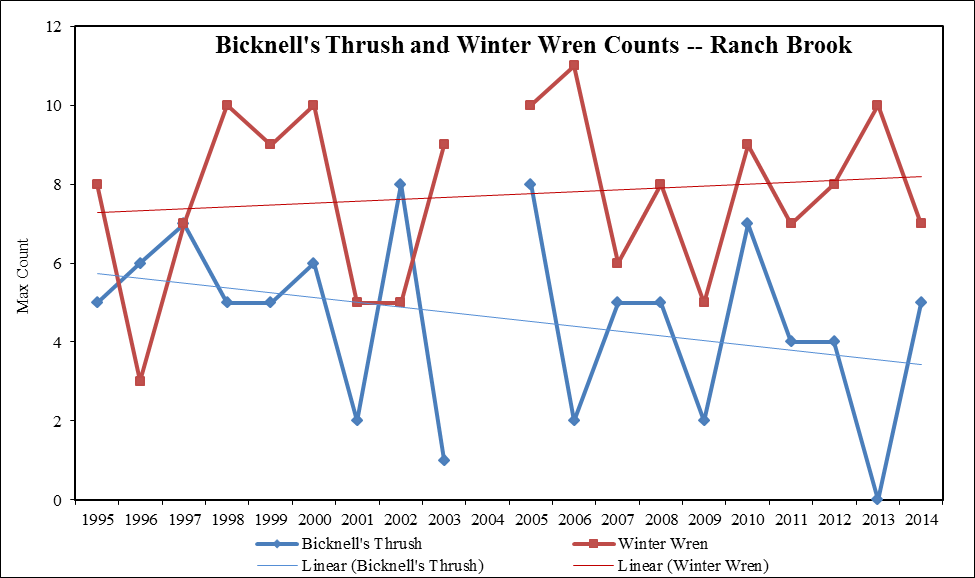 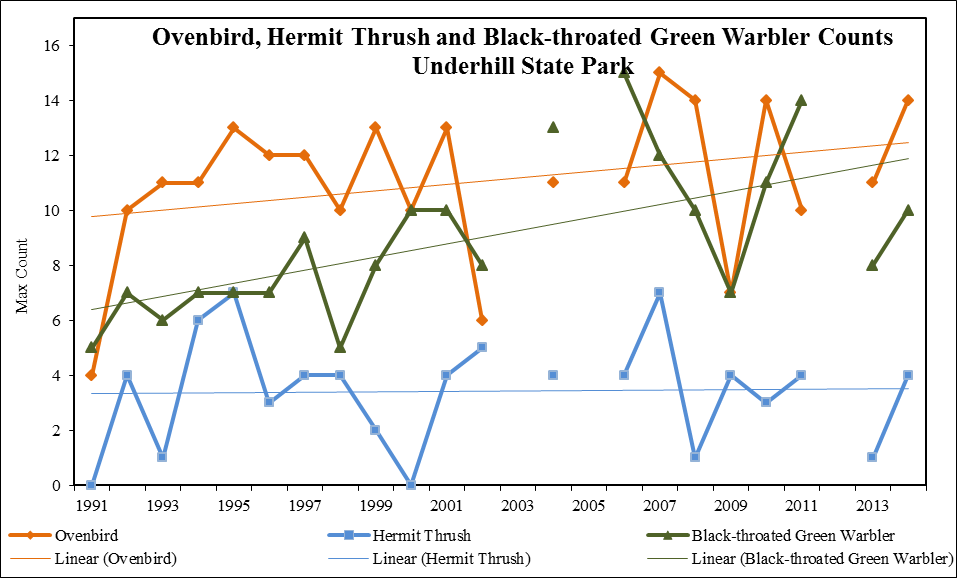 Ranch Brook – Abundance (n=73) more than doubled from 2013's record low of 36 individuals, while species richness increased to the highest since 2008. This included a Black-throated Green Warbler, a new species for the Ranch Brook site, and three Blue-headed Vireos, a record high for this species, which has only been detected in two other years (2006 and 2013). Of the eight most abundant species, five species were above the long-term mean for Ranch Brook, including Bicknell's Thrush, which bounced back from zero detections in 2013 (Figure 24). However, over the 19-year survey period, Bicknell's Thrush exhibits a declining trend at an annual rate of -2.07%.

Underhill State Park – Total number of individuals and species richness remained below average for the site, with just 57 individuals of 13 species recorded, including a Barred Owl, the first for the count. Among the 8 most common species, five were above the 21-year mean, and three were below. Overall, counts of Ovenbird and Black-throated Green Warbler appeared to be increasing, while the long-term trend for Hermit Thrush, the Vermont State bird, remained relatively flat (Figure 25). As with the Mt. Mansfield montane sites, Winter Wren numbers dropped in 2014, with just a single bird detected at Underhill. 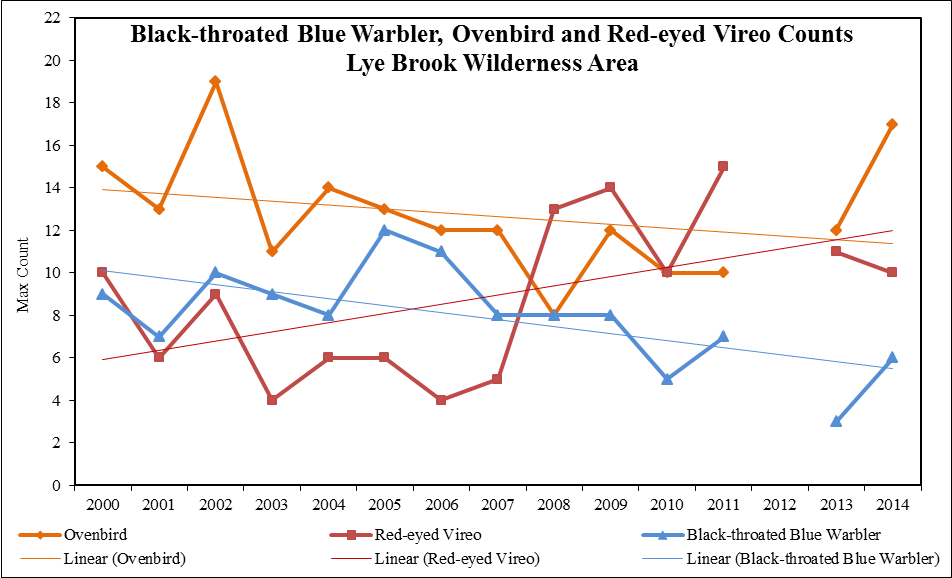 Lye Brook Wilderness Area – Both abundance (n=54) and species richness (n=15) were slightly below the 14-year mean. Among the eight most common species, only two (Red-eyed Vireo and Ovenbird) were above the 14-year average, and only Red-eyed Vireo and Yellow-bellied Sapsucker exhibited increasing population trends. Although Ovenbird numbers increased to the second highest in the count's 14-year history, the species continued a declining trend at an annual rate of -1.27% (Figure 26). While numbers of Black-throated Blue Warbler rebounded from a record low of just three individuals in 2013, their long-term trend shows a significant decline of -3.15% per year (r2 = 0.387; P = 0.036). Although no new species were encountered, a single Rose-breasted Grosbeak was the first detected since 2001, and only the third since surveys began in 2000.

Long-term trends in count survey numbers over the past 24 years at Mt Mansfield strongly suggest that, on average, numbers of many bird species (e.g. Bicknell's Thrush, Blackpoll Warbler, Dark-eyed Junco, White-throated Sparrow) have declined at high-elevation sites since 1991. However, it should be noted that site-specific trend estimates must be interpreted carefully, as these data are from a limited geographic sample. Year to year changes in survey counts may simply reflect natural fluctuations in abundance, differences in detection rates, variability of singing rates due to nesting stage, and/or a variety of dynamic factors, such as predator or prey abundance, overwinter survival, and local habitat change.

It is difficult to know which of the many anthropogenic stressors (e.g., habitat degradation, land use change due to development, acidic precipitation and other atmospheric pollutants, or changing climatic conditions) may be contributing to these declines, but it is likely all have had impacts. As previously mentioned, Bicknell's Thrush is one species that is also being heavily impacted on its overwintering grounds due to forests under siege from illegal charcoal production, subsistence farming, logging and squatting (e.g., McFarland et al. 2013, Rimmer and McFarland 2013). Loss of winter habitat is of crucial concern because of the birds' restricted range and highly selective habitat requirements.

Trends in some anthropogenic stressors are being reversed (SO4 reduced by ~50 %; pH in precipitation now above 5.0) in the northern hemisphere, but climate change has yet to be addressed in any meaningful ways. Reversing the effects of some of these stressors will take decades and it is still unclear if humans have the willpower or discipline to make changes necessary to slow or possibly reverse some of these effects (e.g. changing climate, meaningful reductions in pollutants). In the meantime, forest birds will likely need to rely on their innate abilities to adapt to changing conditions and environments to survive and continue to thrive. This will be more difficult for habitat specialists such as Bicknell's Thrush.

Not all the news is bad, however, as some species continue to hold their own or experience increasing numbers (e.g. Winter Wren, American Robin) at higher elevations on Mt. Mansfield and at the lower elevation Underhill State Park (Black-throated Blue Warbler, Black-throated Green Warbler, Ovenbird). Numbers of Red-eyed Vireo at LBWA also appear to be increasing. Continued data collection and comparison with survey data from other ecologically similar sites will be necessary to fully elucidate population trends of various species at these sites. 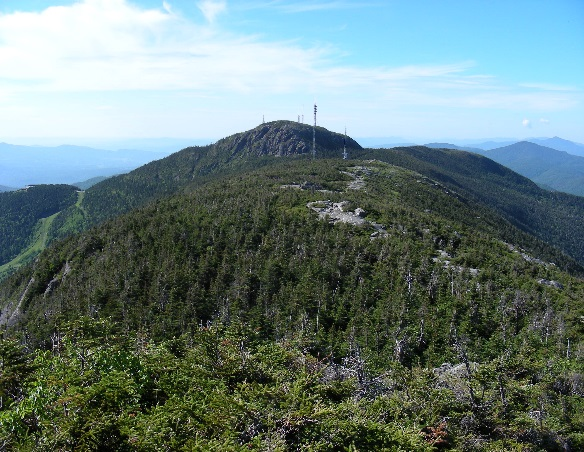 Significant changes to forest bird habitat and environment are occurring, forcing species to adapt to ensure their survival. Can they adapt quickly enough? 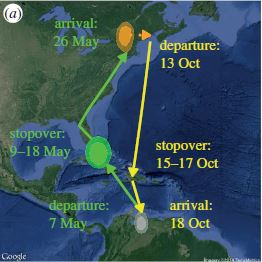 Figure 27. Flight trajectory of male Blackpoll Warbler #2540-59026, banded and fitted with a geolocator on Mt. Mansfield on 8 June 2013, recovered on 8 July 2014. Its geolocator data revealed that it left Mansfield and flew east to the Maine or New Brunswick coast, then struck out over the Atlantic Ocean on 13 October, making landfall on Hispaniola 2+ days later, resting and refueling on the island an additional 2 days, then arriving in either northern Colombia or Venezuela on 18 October. Its non-stop flight covered an estimated 2750 km in 64 hours (from DeLuca et al. 2015; Fig. 1a).

During 2014, our long-term banding studies on the Mt. Mansfield ridgeline yielded remarkable findings on the fall migration patterns of Blackpoll Warblers. In June and July of 2013, we attached miniaturized light-level geolocators to 19 adult breeding males, using a backpack harness arrangement; we recovered units from 3 returning birds in 2014. Colleagues in a parallel study recovered an additional 2 geolocators from breeding male Blackpoll Warblers in Nova Scotia. Analysis of the 5 units confirmed a long-suspected non-stop autumn migration of this species over the western Atlantic Ocean to either the Greater Antilles or the northeastern coast of South America. As reported by DeLuca et al. (2015), this transoceanic migration ranged from 2270 to 2770 km (mean + s.d. = 2540 + 257) and required up to 3 days (62 h + 10) of non-stop flight (Figure 27). This represents one of the longest non-stop overwater flights recorded for a songbird and confirms what has long been believed to be one of the most extraordinary migratory feats on the planet.