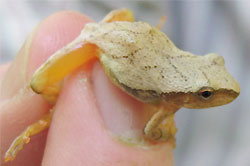 Amphibians such as frogs and salamanders are ideal indicators of forest health and water quality because their survival depends on clean water and a narrow range of healthy soil and water conditions. Changes in amphibian populations over time may indicate changes in environmental quality that might otherwise only be discovered over a longer period of time and with more expensive detection methods. On-going monitoring of key indicator species will aid in the assessment of changes in their abundance over time.

The amphibian monitoring program was one of the original VMC projects and was described in the first (1991) annual report. Steve Trombulak and Jim Andrews initially chose seven frog and salamander species to follow over time as part of a larger effort to understand the dynamics of amphibian populations throughout the state. Jim Andrews ultimately developed this information into a statewide, citizen science inventory called the Vermont Reptile and Amphibian Atlas, online at VtHerpAtlas.org. The seven species were selected due to their local abundance, and their dependence on forest cover, soil, and water conditions. Two of them, the Green Frog and the American Toad, were chosen for their broad distribution and possible sensitivity to herbicides. Specimens are collected using drift fences that channel the animals to buckets which are opened and checked during rain events. Identification of changes in the abundance and distribution of these species may indicate changes in the environmental health of the forest and its waters.

This is the longest-running set of amphibian monitoring data in the state. We have drift-fence data from Mt. Mansfield from 1993 to the present, with the exceptions of only 2004 and 2009. For more detailed information on initial methods, locations of drift fences, and survey results, see the 1995 VForEM annual report at: https://www.uvm.edu/femc/reports/1995_AmphibianMonitoring_Inventory_LyeBrook_Report.pdf. For a more recent update, go to https://www.uvm.edu/femc/attachments/project/999/reports/2012_AmphibianMonitoring_MtMansfield_AnnualReport.pdf

Only one amphibian species, the Northern Dusky Salamander, (Desmognathus fuscus) saw an increase on numbers from 2013 to 2014. One species, the Eastern Newt (Notophthalmus viridescens), maintained 2013 levels, and the other nine species that are annually monitored saw slight or greater decreases in adult numbers. In 2014 all anuran young of the year were found except Pickerel Frogs (Lithobates palustris) and Spring Peepers (Pseudacris crucifer). Total numbers of frogs and salamanders are down from 2013 for both adults and young of the year (Table 9).

Table 9. Monitoring results from drift fences on Mt. Mansfield in 2014.

For some species, such as the American Toad (Anaxyrus americanus), the Wood Frog (Lithobates sylvaticus) or the Eastern Newt, there is great annual variability, so declines in these populations may be followed by a multi-year increase, and are not of concern, yet. Other species, such as the Pickerel Frog (L. palustris) and the Northern Two-lined Salamander (Eurycea bislineata), have too low sample sizes for accurate conclusions. The Spring Peeper counts have continued to be low and are of more concern. Possible sources of their decline may be loss of appropriate breeding habitat (open grassy temporary shallow water), an increase in Green Frogs (L. clamitans) that could be disturbing the eggs during their tadpole stage or possibly feeding on the adult peepers when the Green Frogs are also adults. Changes in the amount of, or depth of frost in, the leaf litter, where Spring Peepers overwinter could also bring about declines. 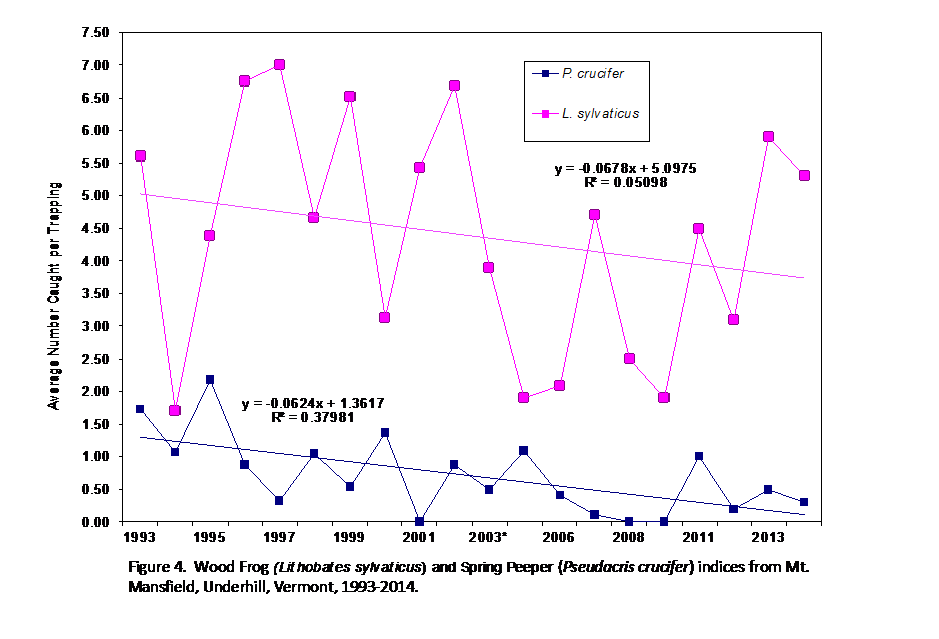 Spotted Salamander (Ambystoma maculatum) populations are neither increasing nor decreasing. This species is long lived and should have less annual variability than some of the shorter lived species. It breeds in the same pools as Wood Frogs but is more resistant to mortality from predation, short term droughts, and the late season freezes that are becoming more common, because unlike Wood Frogs it overwinters below the frost line. An increase in annual variability was noticed in this species in 2002, the same year that Green Frogs numbers showed a large increase, and Wood Frog and Eastern Red-backed Salamander populations increased, too.

Erratic frosts at both shoulder seasons affect some species, like Wood Frogs, more than others. These types of life history comparisons between species will help us rule out some potential causes of these population trends and suggest others, but at this point, little is known about what is driving these changes.

The drift-fence array at Mt. Mansfield has facilitated the longest-running amphibian-monitoring program in the state. It is the only amphibian drift-fence location in Vermont that has been monitored almost continuously from 1993 through 2014. Due to budget cuts, 2014 may be the last year of monitoring at Mt. Mansfield. Long-term monitoring studies are very valuable. There are many questions that these data may answer including how numbers of young of year relate to adult population numbers, correlations and interactions between species, and how climate change effects local populations of amphibians.

The data collected about reptiles and amphibians from Mt. Mansfield, Lye Brook, and from the participants in the VT Reptile and Amphibian Atlas have been used to provide conservation information to private individuals, companies and organizations and governmental units. Biologists from GMNF asked for advice on reptile and amphibian management, private foresters consider herptiles in their management plans, citizens and the VT Department of Transportation assist in road crossings during spring migratory periods, and critical habitat for rare or threatened species has been purchased. All species benefit from these conservation measures. The continuing decline of several species of amphibians in Vermont should be cause for concern for all of us. 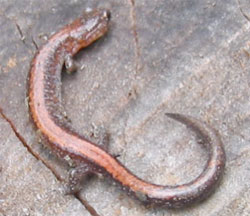 Only one amphibian species of the 11 that we monitor saw an increase in numbers at Mount Mansfield over the last 2.5 decades.