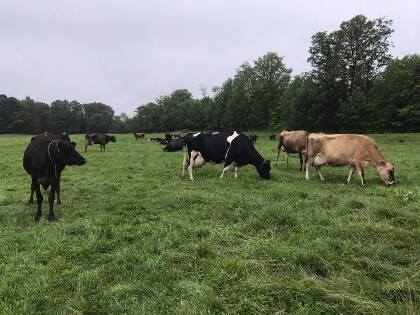 On June 29, 2019, Vermont and the world lost an important and influential voice in the world of sustainable livestock farming.

William (Bill) Murphy was a professor in UVM’s Plant & Soil Sciences Department from 1979 to 2003,  long before there was widespread acceptance of practices like rotational grazing and science-based farming among commercial farmers.

Bill was a teacher and mentor to many in our world - colleagues, researchers and farmers as well. Here are some of the reflections that have been offered.

My very first lesson in the basics of managed grazing was taught by Bill himself at the Second Annual Vermont Grazing Conference, which sparked me to attend many more grazing events and eventually join UVM’s Pasture Program.  Bill’s greatest inspiration (for me), and the thing about him I will always carry forward, was his deep belief that grazing offered a better way and higher quality of life for farmers and their families. It’s a powerful and core value of our work with livestock farmers—they deserve high quality of life.”

At a time when animals, especially dairy cows, were being raised and maintained in confinement, Bill studied and introduced the United States to the art and science of intensive rotational grazing management. This is a practice that has multiple benefits for farmers, lowering costs of production while reducing time spent and machinery used for harvesting and feeding cows during the growing season. At the same time well-managed pastures resulted in less stressed and healthier animals, treated more humanely and allowed to walk in fields and to graze as they had throughout their evolutionary history.

“Bill was the first person in the U.S., along with his graduate students, to scientifically study grazing, beginning with single animals in small paddocks and working eventually with whole herds. Through research, his book Greener Pastures on Your Side of the Fence (a bible for farmers beginning grazing), and outreach efforts in Vermont and in other states, he was able to help farmers with details of grazing—how many paddocks were needed, when to bring the animals in, how to know when to move them, how to handle excess forage in the early season, and how to deal with low productivity either because of drought or natural declines in growth rates late in the season. Rules of thumb and guidelines were developed for estimating the mass of consumable forage in a pasture.”

“I met Bill through his work on pasture management during the 90s while I was studying Agronomy in Brazil. When I felt the need to expand my career, I wrote to Bill, and he invited me to come to Vermont in 2003. He (and his wife Lita) received me in their home and helped me in many ways, with my English, and as a mentor and friend.

“Bill showed me the interrelations in natural systems. He took me to farms around Vermont. His interest wasn’t only about the management or the quality of the pastures, or the animals - he was most worried about farmers’ wellbeing.

“Bill’s light will continue to shine in the world through his beloved family, and also with all of the friends and students who had the pleasure to be connected with him; the farmers he helped, the birds he fed; the forages he meticulously managed for his animals to graze.  We are grateful to him for giving so much, and to know that his work and his passion will continue on in all who learned from him.”