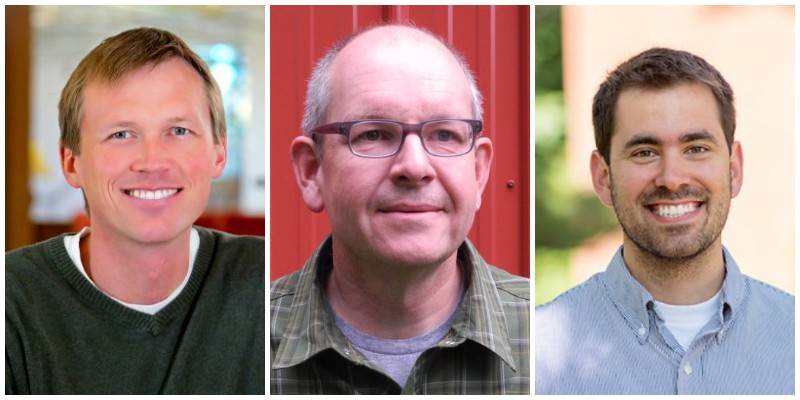 Packetized Energy is a leading developer of software and smart devices that help utilities and consumers manage electricity demand. The story behind the company's core technology began at UVM eight years ago with an open-ended question.

“Jeff Frolik, a co-founder, and I were advising a PhD student who was doing work on wireless sensor networks,” recalls Paul Hines, professor of electrical engineering. “We started wondering ‘what if we could apply these algorithms to the problem of too many electric vehicles charging at one time?’”

In 2016, Almassalkhi led a successful Department of Energy advanced research (ARPA-E) proposal to purse these ideas and in parallel the three—Almassalkhi, Frolik, and Hines—co-founded Packetized Energy to bring the patented technology to market. Last month Packetized was awarded $2 million from the California Energy Commission under their BRIDGE (Bringing Rapid Innovation Development to Green Energy) program. The award will create one of the largest distributed energy resource (DER) networks from residential devices in California.

“This is a really big step for us,” said Hines. “We already have eight projects across country and one in Canada, but this will be our largest project to date.”

Hines explains that the company’s key innovation is making the electricity grid work more reliably with large amounts of renewables like wind and solar.

“The power grid was built for an older model, where you turned on a central coal or nuclear plant and it just ran . . . Wind and solar come and go when they want to, and that creates real challenges for running a power system that was designed around these older fossil fuel plants.”

While solar and wind have long held promise as sources of cleaner, cheaper energy, their ephemeral nature—solar panels collect energy only when the sun shines, and turbines are immobile when the wind isn’t blowing—doesn’t play well with the grid.

The genius of Packetized Energy is providing a “glue technology” that turns home appliances like water heaters, dryers and H-VAC systems into systems into virtual batteries that can be coordinated at scale. The company produces smart controllers for these appliances and a cloud-based software platform called Nimble that “talks” with the controllers, simultaneously listening to demand requests and pricing data from utilities.

Mads Almassalkhi described the process for a UVM Today article in 2018.

“Instead of the water heater turning on right away, a device basically asks, ‘Can I turn on’? And our cloud service says, ‘Okay, yeah, it looks like all is good, go ahead and turn on.’ And another device may come up and say, ‘Okay, I want to turn on,’ and Nimble says, ‘Well, not right now. Come back a bit later.’”

If the water is too cool, the appliance asks Nimble for a small “packet” of energy from the grid. Nimble coordinates in real time whether the request is granted based on market needs, thus making the load flexible. If the hot water heater really needs energy, it will ping the server more frequently. If the request is continually rejected, the appliance will take matters in its own hands and start warming the water, so the consumer—ignorant of the whole digital conversation—can take a warm shower.

“In the Texas grid you had a perfect storm, so to speak. Most of the nuclear and gas plants were not winterized because it usually doesn’t get cold there. Then the weather came in and parts froze and plants had to shut down. You also had wind plants shutting down because the components froze.”

Hines says there are times when there is a shortage of power, and other times when too much power is generated. The ability to send power on demand where it is needed helps avoid the market chaos happening in Texas, where wholesale electricity prices in recent weeks have ranged from negative values to over 100 dollars per kilowatt-hour. Typical consumer prices, Hines says, are around 10 cents per kilowatt-hour.

Packetized Energy has come a long way since the early conversations between the three founders. The company now has about a dozen employees, many of them with UVM connections and most living and working in Vermont.

“It’s is a really nice UVM story,” says Hines. “We have several full-time employees who are alumni of our graduate programs.”

The diversity of talent reflects the company’s ability to attract and retain skilled, experienced workers from a variety of backgrounds, seemingly part of Packetized Energy’s DNA.

“There was a certain amount of serendipity at work,” Hines recalls, when discussing the origins of the company. “Mads came to us having worked in a startup company before—his expertise was really valuable for us. I have a rather eclectic background in the electrical industry, as a federal regulator, and in academia, so I have perspectives on different corners of the industry and an understanding of the economics of how it works. Jeff has deep insights in algorithms . . . he’s also great at logistics and brings a lot of knowledge needed to keep things running on a day-to-day basis.”

The innovations originating at Packetized have also attracted knowledgeable advisors like Scott Johnstone, former leader of the Vermont Energy Investment Corporation, and Tim Healy, who founded EnerNOC, a leader in the global demand response until it was purchased by European utility Enel in 2017.

The company's headquarters in the Chase Mill building in Burlington. The facility hasn’t been utilized as much during the COVID-19 pandemic but it still provides space for the company’s hardware team to test product designs.

Packetized Energy’s overall mission is to “enable clean, affordable, resilient energy for all people,” and Hines sees a confluence of factors that make the company’s solutions the right set of ideas at the right time. One factor is the growing public consensus about the danger of global warming and the pressing need for clean energy solutions.

“The other factor is the commercial driver,” said Hines. “Wind and solar are just plain financially cheap, and you can build plants for purely economic reasons. That’s where you really see change. Now, Shell and BP are getting into the game, so it’s not just for ultra-green environmentalists. This is real business now.”

Kevin Coburn
“Wind and solar are just plain financially cheap, and you can build plants for purely economic reasons. That’s where you really see change. Now, Shell and BP are getting into the game, so it’s not just for ultra-green environmentalists. This is real business now.” - Paul Hines, professor of electrical engineering