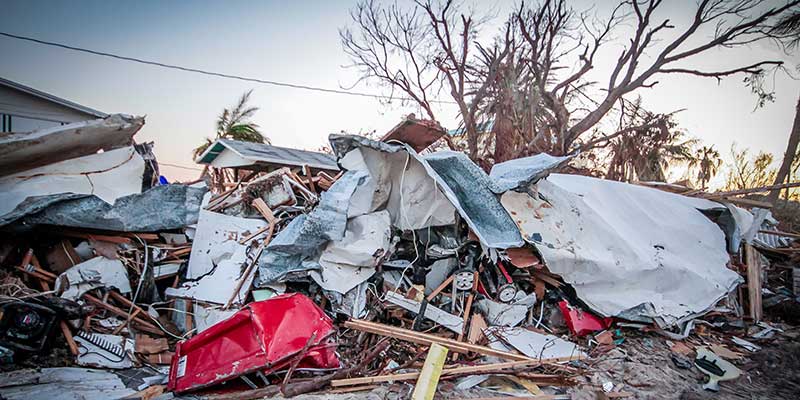 A trailer in Marathon, Florida, the most populated island in the Florida Keys, was destroyed by Hurricane Irma. A new UVM study projects that financial loss could increase more than 70 percent by 2100 if oceans warm at a rate forecast by the Intergovernmental Panel on Climate Change under the panel’s worst case scenario. (Photo: Zak Bennett)

If oceans warm at a rate predicted by the Intergovernmental Panel on Climate Change, the United Nation-sponsored group that assesses climate change research and issues periodic reports, expected financial losses caused by hurricanes could increase more than 70 percent by 2100, according to a University of Vermont study just published in the journal Sustainable and Resilient Infrastructure.

The finding is based on the panel’s most severe potential climate change scenario – and resulting increased sea surface temperature – and is predicted at an 80 percent confidence level.

The results of the study, which focused on 13 coastal counties in South Carolina located within 50 miles of the coastline, including the most populous county, Charleston, are drawn from a model simulating hurricane size, intensity, track and landfall locations under two scenarios: if ocean temperatures remain unchanged from 2005 to 2100 and if they warm at a rate predicted by the IPCC's worst-case scenario.

Under the 2005 climate scenario, the study estimates that the expected loss in the region due to a severe hurricane -- one with a 2 percent chance of occurring in 50 years -- would be $7 billion. Under the warming oceans scenario, the intensity and size of the hurricane at the same risk level is likely to be much greater, and the expected loss figure climbs to $12 billion.

The model drew on hurricane data for the last 150 years gathered by the National Oceanic and Atmospheric Administration, then created simulated hurricanes under the two scenarios over 100,000 years and estimated the damage from every storm that made landfall in the study area.

Researchers then overlaid information from the Federal Emergency Management Agency’s HAZUS database, a zip-code-by-zip-code inventory of building types and occupancy. HAZUS sets out loss estimates according to wind speed for costs of repair, replacement, content and inventory, as well as costs resulting from loss of use, such rental income loss, business interruption and daily production output loss.

The researchers did not find that warming oceans will lead to more frequent hurricanes, only that warmer seas will lead to higher wind speeds and storms that are greater in size and therefore cover a larger area.

The losses are calculated based only on wind and wind-driven rain and do not include the large financial impacts of storm surge or flooding.

“The study shows that a significant increase in damage and loss is likely to occur in coastal Carolina, and by implication other coastal communities, as a result of climate change,” said one of the authors of the paper, David Rosowsky, a civil engineer at the University of Vermont and the university’s provost.

“To be prepared, we need to build, design, zone, renovate and retrofit structures in vulnerable communities to accommodate that future," he said.

The study was based on the IPPC’s Fifth Assessment, issued in 2013 and 2014. The worst-case ocean warming scenario the loss study is based on was not anticipated or included in the prior report, published in 2007.

“That suggests that these scenarios are evolving,” Rosowsky said. “What is today’s worst case scenario will likely become more probable in the IPCC’s future reports if little action is taken to slow the effects of climate change.”

The increasing severity of hurricanes will also affect hurricane modeling, Rosowsky said, and consequent predictions of damage and financial loss. In a postscript to the paper, which will also be published as a chapter in a forthcoming book, Rosowsky cites the three catastrophic storms of the current hurricane season, Harvey, Irma and Maria, as examples of events so severe they will shift the assumptions about the likelihood that such severe hurricanes will occur in the future.

The paper was co-authored by Yue Wang, a former postdoctoral researcher in the Department of Civil and Environmental Engineering at the University of Vermont.