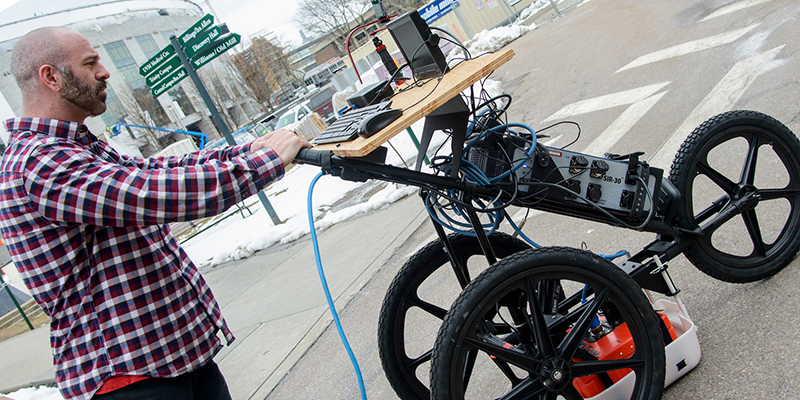 UVM post-doctoral student Dylan Burns demonstrates how the cognitive ground penetrating radar apparatus could be wheeled over an area to scan and map underground infrastructure. The GPR unit, housed in the box near the ground, can peer six to 12 feet down. (Photo: Brian Jenkins)

Digging a hole in most major cities – for new construction or infrastructure repair – is no minor undertaking.

With a dozen or more separate utilities required to inspect the ground under the dig site for a welter of obstructions like water, sewer and gas pipes, electric lines and electric generators – some so old they don’t appear on city maps – the permitting process can take 18 months or more.

The ongoing research project, “Underground Infrastructure Sensing,” recently won a Smart 50 Award from a coalition that includes Smart Cities Connect, the Smart Cities Connect Foundation and US Ignite honoring the 50 “most transformative smart projects each year."

The technology, which is being supported by two National Science Foundation grants and one from U.S. Ignite, was showcased in a featured demo at the Smart Cities Connect national conference in Kansas City on March 29.

The project’s goal is bold, said Dryver Huston, a mechanical engineering professor at the University of Vermont, and the project’s principal investigator.

When the technology is fully developed, “a person with augmented reality goggles or a specially equipped smart phone or tablet will be able to walk over the area that needs to be inspected, look into the device and see in detail what’s underground six to 12 feet down,” he said.

(In this video, augmented reality software converts a grainy scan of a pipe buried under sand, captured with a ground penetrating radar system, to a perfectly rendered 3-D object visible with augmented reality goggles.)

At the University of Vermont, researchers – including electrical engineering professor Tian Xia, Huston’s UVM collaborator – are refining an advanced ground penetrating radar, or GPR, system Huston developed that can peer deep underground to detect buried infrastructure, some of it dating to the mid-19th century, and create scans of what it sees.

The researchers are able to locate scans in a geographic space the program can remember and knit together into a map – the cognitive part of the project – by using a common 3D scanning smart phone app.

“The net result is that the system knows where you are, knows what’s underneath, and can show you detailed images of what’s there,” Huston said.

Computing at the edge

In its other major component, researchers at the University of Tennessee Chattanooga, led by Dalei Wu, an assistant professor of Computer Science and Engineering, are developing an edge computing platform that will enable the huge amount of data generated by the UVM team’s technology package to be processed near the data collection site – at its “edge” – so it can be quickly relayed back to the radar operator in real time as the area is being mapped – or, later, to utility or construction workers who are walking the site to see what lies underneath.

Conventional cloud computing that relied on a faraway centralized server could not provide this feedback loop without frequent breaks and longs delays in the visuals.

Wu’s team is also developing an encryption system that will keep the infrastructure data secure as it flows back and forth, addressing a key concern of safety and law enforcement officials.

“Ground-truthing” shows technology is on track

After working on technical development for three years, Huston and his team have spent the last six months “ground-truthing” the radar scans and the associated technology on the University of Vermont campus and in the neighboring town of Winooski, with Burlington scheduled for the spring.

In partnership with the university’s physical plant team and city workers in Winooski, Huston and his team took scans of underground infrastructure at dig sites before the work took place, then compared what the GPR showed with what was actually there.

“It checked out,” Huston said.

Wu’s team was able to transfer the huge amount of data generate by the GPR and the 3-D scanning software from a street near the university back to a server on the campus in real time, a technical challenge of the highest order, Wu said. He is also making headway in developing encryption systems.

"We paved the way to go further,” he said.

A system like the one being developed by Huston and Wu is sorely needed. According to the American Public Works Association, an underground utility line is hit, on average, every 60 seconds in the United States, which costs national economy billions of dollars. A study by the National Research Council of the National Academy of Sciences found that only 35 percent of municipal utility records are complete and up to date.

Both Burlington and Chattanooga are U.S. Ignite cities with high speed gigabit networks. The work between Huston and Wu is being facilitated by this high speed connection.

In addition BTV Ignite, Burlington’s digital city initiative, has worked closely with UVM to support and promote the project.