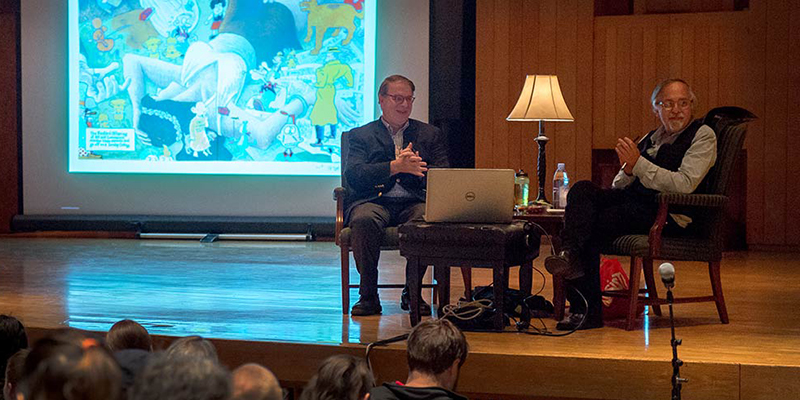 Pulitzer Prizes, MacArthurs, Guggenheims, American Book Awards and numerous New York Times Best Sellers are just a sampling of the achievements collectively stacked up by the trio of artists/authors — Art Spiegelman, Joe Sacco and Alison Bechdel — who shared keynote honors at last week’s Pulp Culture Comic Arts Festival & Symposium. And, as if we need further confirmation of their cultural currency and cartoon cred, consider that Spiegelman and Bechdel have both appeared on “The Simpsons.”

Hosted by UVM, which co-organized the festival with the Vermont Folklife Center, the three-day event drew hundreds of comic artists and fans of the medium. There are many portals into the work of the three celebrated artists and, more broadly, contemporary comic arts. Literature, visual arts, history, sociology, political science, anthropology, journalism and social activism to name a few. Evidence of that was found in the students and faculty from across a broad array of disciplines filling the Music Building’s Recital Hall for Spiegelman’s appearance on the festival’s opening night event, sponsored by UVM's Carolyn and Leonard Miller Center for Holocaust Studies.

Early birds were fortunate to get a seat. Those who shaved it close to 7 p.m. perched on the stairs or stood in back when Spiegelman, blue glow of an e-cigarette in hand, and moderator Dan Fogel, chair of the English Department, walked onto the stage and settled into a pair of arm chairs for a two-hour discussion of the author’s diverse career and the evolution of comic arts.

Fogel, who currently teaches a course on graphic novels, shepherded the talk with the help of his laptop and a projector queued up with images encompassing the scope of Spiegelman’s work. The arc of that career spanned from the childhood inspiration of “Mad Magazine” to his years of work for Topps bubble gum/baseball cards (“my Medicis,” Spiegelman quipped), from his covers for “The New Yorker” to his exploration of the Holocaust in the landmark “Maus,” which redefined the medium and received a Pulitzer Prize in 1992.

The next day, Spiegelman went from star on the stage to fan in the audience for fellow cartoonist Joe Sacco’s talk. Credited in his own-right as a pioneer of graphic journalism and war reportage, Sacco’s books, such as “Palestine” and “Footnotes in Gaza,” have further pushed the boundaries of cartooning.

Beyond the talks, comic arts took the spotlight many places on campus. A display in the Bailey/Howe Library showcased the work of the keynote speakers and also comic artists from Vermont and Quebec. On Friday evening, students in a service-learning-based Spanish course taught by Rachael Montesano delivered dramatic readings from “El Viaje Mas Caro,” cartooning stories created, through an initiative of the Vermont Folklife Center, by migrant dairy farm laborers.

Discussion panels throughout the day on Saturday led up to the closing keynote by local hero Alison Bechdel. Celebrated for her long-running strip “Dykes to Watch Out For” and her graphic memoir turned Broadway musical, “Fun Home,” Bechdel has been a UVM Marsh Professor-at-Large for the past several years. Professor Jackie Weinstock, an associate professor in Human Development & Family Studies who includes LGBTQ relationships and communities among her scholarly interests, moderated the discussion.

Bechdel was informal and insightful, funny and frank. Reflecting on the unlikely success of “Fun Home,” she said, “At age 40, it saved my ass. I got to keep being a cartoonist.” She traced a line back to Spiegelman. “The publication of ‘Maus’ turned everything upside down. You could tell painful, complex, adult stories and people would read them.”

For the event’s masterminds — Jonah Steinberg, associate professor of anthropology, and Andy Kolovos, director of archives and research at the Vermont Folklife Center — the event was the culmination of years of work that began with a “hey, what if?” moment between friends. On the Monday after, Steinberg enthused about the ways the event crossed disciplines in terms of support and participation. Particularly gratifying, seeing Spiegelman, Sacco and Bechdel connect, attending one another’s talks and having dinner together each evening. “Here were the three greatest cartoonists of our time talking. There was collaboration and intersection that was incredible and unexpected — tremendous synergy,” Steinberg said.

Missed the festival? Don’t despair, there’s another chance to get an up-close look at cartooning’s cutting-edge next semester when the Fleming Museum presents “Self-Confessed! The Inappropriately Intimate Comics of Alison Bechdel.”