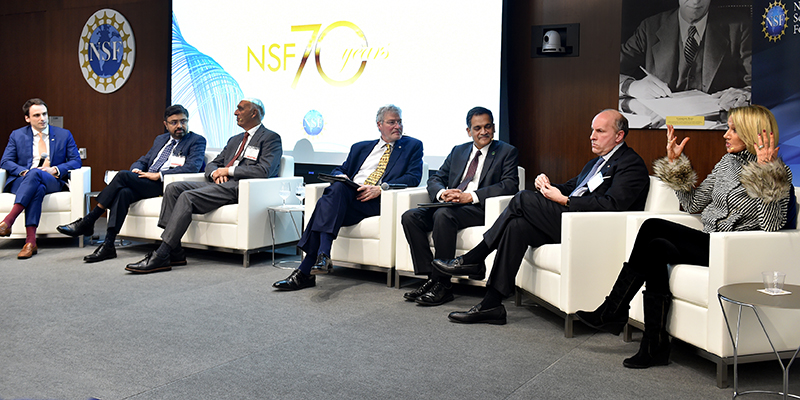 University of Vermont president Suresh Garimella participated in a panel discussion at a high-profile symposium this week commemorating the 70th anniversary of the National Science Foundation.

The event, which featured some of the nation’s top science leaders, was held Feb. 6-7, 2020 at the organization’s headquarters in Alexandria, Virginia. It was sponsored by the National Science Foundation.

Garimella participated in a panel titled “Partnerships to Address National Priorities.” He was the only higher education leader on the panel.

“I’m pleased and honored to have attending NSF’s Anniversary Symposium and participated in this important panel discussion,” Garimella said. “Partnerships between the public and private sectors are a key means of driving innovation and of spawning the applied research that leads to economic growth and improved human welfare. I very much enjoyed engaging in a dialog with the other panel members, sharing my thoughts and learning from my distinguished colleagues.”

Other panel members included geophysicist Marcia McNutt, president of the National Academy of Sciences and chair of the National Research Council; Prem Natarajan, vice president of Alexa AI and head of Natural Language Understanding at Amazon; Paul Dabbar, undersecretary of science at the U.S. Department of Energy; Walter Copan, director of the National Institute of Standards and Technology in the U.S. Department of Commerce; and Robert Conn, president of the Kavli Foundation. The panel was moderated by Michael Kratsios, chief technology officer in the Office of Science and Technology Policy in the White House.

Before coming to UVM in 2019, Garimella was executive vice president for research and partnerships at Purdue University. He led a $660 million per year research enterprise there and oversaw Discovery Park, a unique set of facilities and institutes where disciplines converge to solve global challenges related to health and life sciences, sustainability, food, energy and defense, and security. He was responsible for Purdue’s international programs and its global and corporate partnerships, focused on strengthening relationships to advance innovation, research, education and commercialization.

In 2018, Garimella was appointed to the National Science Board, which oversees the National Science Foundation and also serves as an independent body of advisers to both the president and Congress on policy matters related to science, engineering and educating the next generation of scientists. He is also a fellow of the National Academy of Inventors.

During Garimella’s inaugural year at UVM, the university has formed research partnerships with Google and the U.S. Army and is in the process of exploring alliances with several other multi-national organizations.

Garimella is the co-author of over 525 widely cited archival publications and 13 patents.

The National Science Foundation was created in 1950, when President Truman signed the National Science Foundation Act, creating the only federal agency charged with funding fundamental research and education across all fields of science and engineering. In addition to commemorating NSF’s 70th anniversary, the symposium marks 75 years since the publication of Vannevar Bush’s visionary report, “Science—the Endless Frontier,” which laid the groundwork for the agency’s creation.

The agenda for the symposium included four other panel discussions and a series of presentations by leading scientists, including Frances Córdova, NSF director.

The panel, and the entire symposium, were webcast. Watch the panel webcast below.