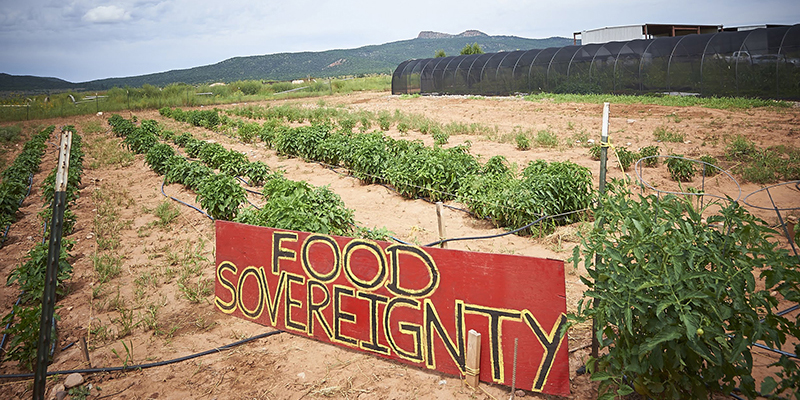 One might reasonably assume that Emily Maheux’s passion for agriculture stems from growing up on Vermont’s Champlain Islands, among apple orchards and dairy farms. But truth be told, she was more interested in playing hockey and studying culture and art during her adolescent years than in milking cows or picking apples. In fact, it wasn’t until she took a class with University of Vermont Professor Teresa Mares that Maheux ’13 began to consider the complex ways in which food intersects with health and culture.

“Food is central to the human experience and is very intertwined with our cultural identity,” Mares explains. “I often tell my students that food is a lens into understanding nearly everything else: love, family, pain, identity, health; that by studying what we eat, we learn more about who we are and who we are not.”

Having earned a BA in anthropology with minors in studio art and nutrition, Maheux admits that even she is surprised by her career trajectory at times when she reflects on her current surroundings: a modest farm situated within the 1.6 million acres of sprawling land and craggy mountain ranges that compose the White Mountain Apache Reservation. Maheux is one of few non-tribal members living and working on the reservation — home to some 13,000 White Mountain Apache — and is the only non-tribal staff member at Ndee Bikiyaa (“the People’s Farm” in Apache), where she serves as program coordinator.

She first arrived at the farm in 2015 for a year-long assignment with FoodCorps, the agriculture and nutrition arm of AmeriCorps, but five years later she’s still there and is integral to its daily operations and mission to “restore personal and culture health among the White Mountain Apache Tribe through agriculture.” 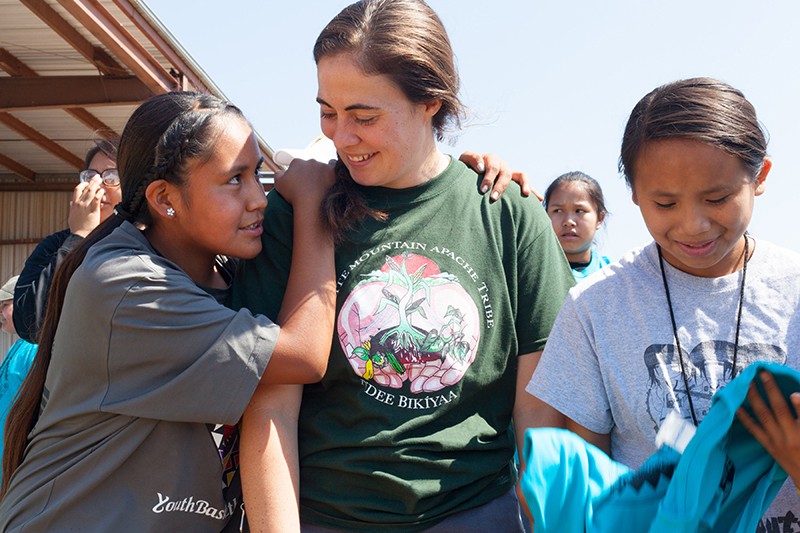 As program coordinator at the Ndee Bikiyaa, the People's Farm, Emily Maheux leads educational programming for White Mountain Apache children during the summer at Farm Camp. (Photo: Courtesty of Maheux)

While farming and agricultural practices were once paramount to the tribe’s ethos, due to traumatic colonial history and the creation of the reservation, local produce is nearly inaccessible for current residents. Consequently poverty, obesity, diabetes and addiction rates on the reservation have reached highs while Apache identity erodes. With the exception of Ndee Bikiyaa, the only farms operating on the 1.6 million-acre reservation today are small, family-run enterprises.

“The farm is a combination of bringing healthy food and nutrition education to people on the reservation, and also reinforcing traditional White Mountain Apache culture by tying identity and healing to it. No other entity is doing anything quite like it on the reservation,” Maheux says.

Ndee Bikiyaa grows fresh fruits and vegetables on a 26-acre plot, which they then distribute to local markets, schools and programs that might not otherwise have access to nutritious produce and ingredients. They harvest everything from beets and lettuce to special heirloom varieties like Apache corn and Apache giant squash, as well as what Maheux describes as “wild foods;” edibles like black walnuts and Emory oak acorns that can be used to make a traditional Apache soup.

“There are hundreds, if not thousands, of other wild and cultivated traditional Apache foods. Many of which our staff are still learning about because that knowledge is becoming lost, but that's part of the educational work the farm incorporates into workshops,” she says.

To date, Maheux has helped the farm secure well over one million dollars in grant funding to support its growth and longevity, and has expanded community programming to incorporate tribe members of all ages. She co-hosts biweekly garden- and farm-based healing sessions for addiction treatment patients and teaches farmer training workshops to nearly any tribe member who’s interested in getting their hands dirty.

“People are interested in trying to grow their own food or support the farm, and it feels like it's really taken off. It's sometimes overwhelming with people calling wanting to help or trying to purchase produce — but it's really great and exciting to see.”

And that encouragement is vital to the tribe in retaining its agricultural heritage as well as to the future of the farming industry as a whole. According to the most recent Census of Agriculture, of the 3.4 million producers in the United States who, on average, are just shy of 58 years old, only 1.7 percent identify as either Native American or Native Alaskan.

But while the farm confronts a serious threat to the future of White Mountain Apache tradition and its health, Maheux remains hopeful about the possibilities that lie ahead for the resilient tribe. “Tribal members are really, really resilient people, and the people face a lot of challenges. Instead of talking about native people as part of history, I think it’s important to understand what reservations are like today and know that, through history and modern education systems, many Native reservation populations have been silenced.”