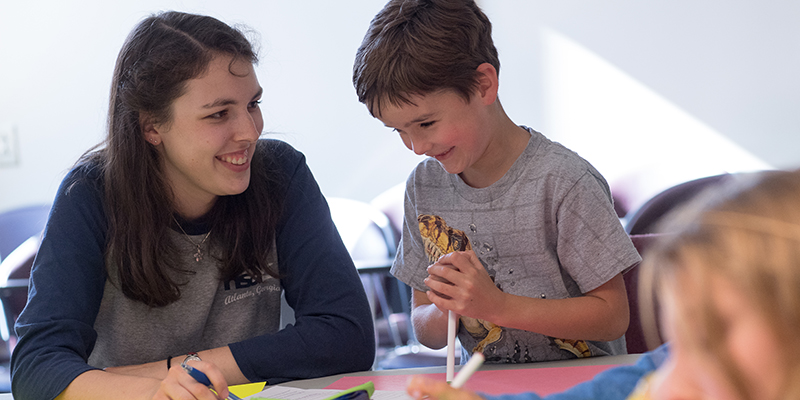 Elizabeth O’Donnell ’19 was one of the Communication Sciences and Disorders students immersed in the camp, learning first-hand what it’s like to navigate the world as a child who stutters. (Photo: Sally McCay)

Starting at UVM’s first summer camp for children who stutter four years ago, 13 year-old Madison Denton has grown to be a nationally recognized advocate for her peers. The project that helped spark it all: creating a pamphlet, alongside other campers, for Ben & Jerry's employees that explained how best to interact with customers who stutter. Recently, Denton was named the 2017 National Stuttering Association Kid of the Year.

Denton served as a mentor at this year’s fourth annual summer camp offered through UVM’s Eleanor M. Luse Center for Communication. The camp provides children ages 7-12 the opportunity to interact with other children who stutter – in some cases for the first time – and to learn therapy-based self-empowerment activities like drawing pictures that represent their stuttering and characters that can defeat it.

“The camp has been inspirational for me because you learn a lot about stuttering and interact with other people who stutter,” says Denton, whose letter writing campaign to American Girl Doll contributed to the creation of a doll who stutters named Gabriela. “Some people don’t understand stuttering and can kind of judge you, so I try to educate them because I feel like if people learn more about stuttering they won’t be as critical.”

This year’s campers created a Back-to-School Survival Guide for Kids/Students Who Stutter that the National Stuttering Association plans to distribute nationwide. In previous years, campers designed a "Stutter!" board game with questions about stuttering that was distributed to local school districts and a movie titled “Stuttercraft” based on characters from the video game “Minecraft.”

Danra Kazenski, clinical assistant professor of communication sciences and disorders, started the UVM camp when she arrived four years ago, also establishing the Burlington chapter of the National Stuttering Association, to increase opportunities for the approximately 6,000 Vermonters who stutter. “The goal was to help kiddos build self-acceptance,” she says. “The camp automatically shows them that they are not alone.”

Kazenski also saw the camp as an opportunity for undergraduate and graduate students in Communication Sciences and Disorders to learn first-hand what it’s like to navigate the world as a child who stutters. “I tell students that the best way to learn is to listen and really pay attention to what the kiddos are saying and be open and genuinely curious,” says Kazenski, an expert on the clinical supervision and education of students working with children and adults who stutter. “You always learn something by just hearing their stories.”

Junior Elizabeth O’Donnell, who had never worked with children who stutter prior to the camp, was struck by how much confidence campers gained just by spending time with other children who stutter. “I learned a lot about social interactions, like what you do when someone interrupts you or asks ‘why do you talk like that?’” says O’Donnell, who hopes to work with a stuttering support group in the fall. “Seeing the children gain confidence during the camp and realizing that stuttering is not something they should be embarrassed about was an amazing experience.”

Morgan Bailey, a graduate student in UVM's speech-language pathology program, says she learned a lot about the common mistakes people make when talking with someone who stutters like trying to finish their sentences for them or nervously interrupting to break an awkward silence. “One of the biggest takeaways for me was seeing that some kids are okay with stuttering or don’t realize it, while others are very insecure about it,” says Bailey. “Because it’s very different for each child, you have to establish a baseline and figure out where they are at, and then go on from there.”

UVM's Stuttering Summer Camp is part of an increasing number of support options offered by the Eleanor M. Luse Center, which provides audiology and speech language services, as well as treatment for stuttering in children and adults throughout greater New England. The Center also serves as the primary training site for students in the Master of Science communication sciences and disorders.

Professor Barry Guitar, one of the world’s leading experts on stuttering, has led an adult stuttering support group for more than two decades at the clinic. The new local National Stuttering Association chapter co-founded by Kazenski hosts three support groups for kids/parents, teens, and adults, which meet monthly at UVM .

“Madison learned that she is not alone, that it’s okay to stutter,” says Sara Denton of her daughter’s camp experiences. “Now her drive is to really raise awareness about it because she thinks that people who make judgements about stuttering don’t understand it versus knowing what stuttering really means.”