Displaced by war, sisters Yara and Haya Alshaabi find their calling in medicine 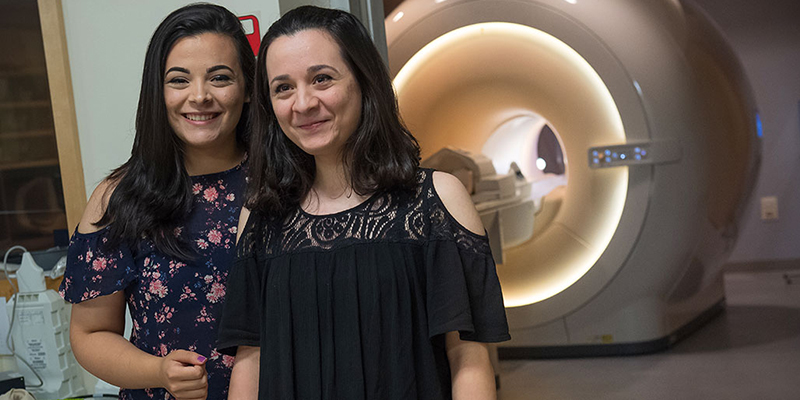 Yara and Haya Alshaabi, both seniors, stand in the UVM Center for Biomedical Imaging, where Yara is developing an independent study on breast cancer treatment. The sisters, originally from Syria, have their sights set on medical careers, fueled by a desire to help others. (Photo: Sally McCay)

There are many reasons why a young person might dream of becoming a doctor. In 2011, Haya and Yara Alshaabi—both UVM class of 2019—were Syrian kids going to high school in Damascus. Their father was a dentist for the United Nations, their mother taught English. “But then—the war,” says Haya. As the fighting grew fiercer, they were in danger. The family went to the U.S. embassy in Lebanon, and in October 2013, they got a visa to move to the United States.

“It was not scary. It was lonely,” says Haya, now twenty-two.

“We had to leave our friends. We were starting a new life,” says Yara, twenty-one.

The two sisters excelled at Burlington High School, were admitted to the UVM Honors College, and both have pursued independent research projects in biological science, “with the drive and resilience of full-blown graduate students,” says scientist Brian Cunniff, a professor in Pathology and Laboratory Medicine. This past summer—with a $5,000 Honors College summer research fellowship—Haya continued her work in Cunniff’s lab to better understand how the positioning of mitochondria influences the migration and signaling of cells. It’s basic science that aims toward new treatments to block the spread of cancer and other diseases.

In the nearby UVM Center for Biomedical Imaging, Yara Alshaabi points into the low light of a room with a large MRI machine. “The volunteers will be in here, and we’ll be asking them to do challenging tasks while we scan their brains,” she explains. She’s developing an independent study—supervised by professor Julie Dumas in the Department of Psychiatry, and with funding from the UVM Office of Fellowships, Opportunities, and Undergraduate Research—of two groups of older women who have survived breast cancer. One group completed their treatment within the last three years; the other group is about a decade past treatment. “I’m studying how age and time since cancer treatment influence the function and structure of the brain,” she says. “Chemotherapy and hormone therapy are working very well to help women survive, but we know the treatments can have side effects on brains and memory.”

In April, after years of effort and waiting, the Alshaabi family (including Haya and Yara’s older brother, Thayer, a graduate student in data science and complex systems at UVM) received permanent U.S. residency. Now the sisters are free to apply to medical school.

“I hope to do research and be a surgeon,” says Haya.

“Maybe I’ll be a psychiatrist,” says Yara. “Medicine is my passion. I love helping people.”

“I lost hope when I was in Syria during the war,” she says. “I’d like to help people who lose hope.”

Some college students are proud of having two skateboards. “I have two cell lines of my own,” says Haya of the cells she maintains for experiments at the UVM lab. And some college students see moving away from their hometown and siblings as freedom. But the Alshaabi sisters keep in close contact with friends in Syria and love living together in their hard-earned Vermont home.

“She’s been my roommate since I was one,” says Haya.

“I love living with my parents, more than living in a dorm,” says Yara. “You feel safe with your family.” But they do squabble sometimes. “Over t-shirts,” says Haya.

“She’s kind of messy,” says Yara, “She has piles of books everywhere.”

Joshua E. Brown
I lost hope when I was in Syria during the war. I’d like to help people who lose hope. —Yara Alshaabi