FAN Program Makes It Easy for Faculty to Cross Disciplines. And It Comes with Free Lunch. 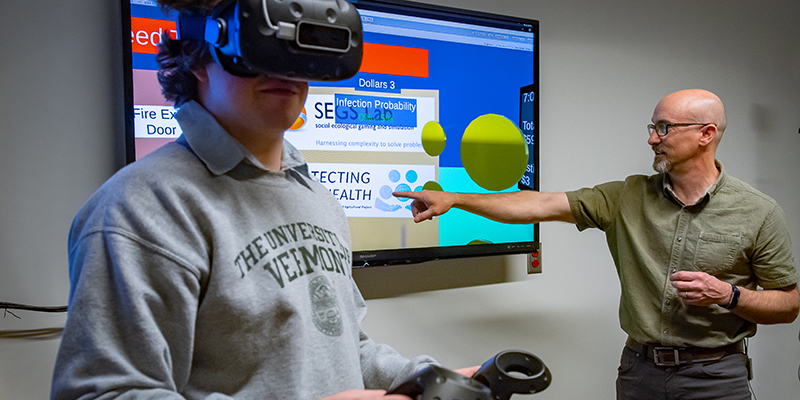 It was a scene you don’t often see in academia.

Clustered around computer screens in a classroom in Jeffords Hall were small groups of faculty in widely divergent disciplines – Psychiatry, Business, Ecology, Community Entrepreneurship and Engineering – engaged in animated conversation.

The disciplinary mash-up and engaged dialog were exactly the point of the get-together, the latest meet-up – held last May – of UVM’s Faculty Activity Network, or FAN, says research vice president Richard Galbraith, who created the program in 2015.

“Everyone is so busy, everyone is working so hard, there's no time” for faculty to venture outside their disciplinary bubbles to see what’s going on in other parts of the university, Galbraith says, despite the fact that they know funders favor interdisciplinary research and complex contemporary problems usually benefit from it.

“The idea of FAN is to make that time.”

The time was being well spent in Jeffords Hall.

The host of the session was the Social Ecological Gaming and Simulation, or SEGS, Lab, located down the hall in Jeffords, where a group of faculty and students have developed a suite of computer games that simulate real-world challenges. When a large sample of people play the games, their collective choices reveal otherwise hard-to-get-at behavioral tendencies and attitudes, a research methodology UVM is pioneering.

Several of those games were on display on the computer screens at FAN, including one – developed with part of a $7.4 million USDA grant the university received in 2015 – set on a farm that gave players varying incentives to take more or less risky steps to protect livestock from the threat of disease. PLOS ONE recently published a paper on the findings. SEGS managing director Scott Merrill was the lead author.

For Chris Koliba, Community Development and Applied Economics professor and co-director of the lab, FAN presents a unique opportunity to find collaborators in different disciplines.

“The goal of our FAN is to seed these simulation tools into other domains,” he says. “We’ve got a high functioning team here, and we’re looking to collaborate with colleagues across the campus who are working in research areas that we’re not in currently, who might be interested in the methods that are being shared today.”

That message hit home for Diann Gaalema, an associate professor of Psychiatry, whose current work uses a variety of methods, from analyzing survey data to conducting clinical trials, to gauge the consequences for smokers, some unintended, of a proposed FDA regulation reducing the amount of nicotine in cigarettes.

“This is a different modality for modeling,” she says. “One of the students [involved in the SEGS lab] was saying, playing a game seems more interesting than taking a survey. If you could gamify surveys, that would not be a bad thing.”

From FAN to Network

For Geography associate professor Pablo Bose, a FAN session he helped host in 2016 has been a game-changer. When Bose arrived at UVM, he soon realized that UVM faculty in a variety of disciplines were working with Burlington’s refugee population, as he was.

“When the first FAN announcement came out, I thought, wow, this is great,” he says. “It’s an opportunity to actually get people together, to find out who else is doing this kind of work and to figure out what would we do as a network.”

The FAN meeting happened, and it led to others. “We had people in education, in medicine, in CALS, as well as Arts & Sciences. We came together, we talked about the research we were doing and the different things we kind of wanted to do.”

One outcome was a website listing all UVM faculty doing research with refugees, with thumbnail descriptions of their work – essentially a menu for potential collaboration.

The network, and the collaborations, also helped Bose win a Carnegie Foundation grant to build the capacity of the Association of Africans Living in Vermont, a non-profit many UVM faculty work with. Bose is also in conversation with the Ford Foundation to establish a Center for Refugee and Immigration Studies, building on the work of the UVM faculty network.

While the long-range goal of the FAN program is to help promote a faculty research culture of interdisciplinary collaboration, Galbraith likes to stay relaxed about the short-term, which could yield any number of outcomes he’d be happy with.

“They could range from ‘That was really interesting, and I need to get back to work,’ to ‘Yeah, I knew something about this and now I know a lot more and I’m better informed,’ all the way to ‘We need to talk more because maybe we could do something together,’” he says.

The program also comes with a perk: a lunch in Waterman Manor after the lab session with Galbraith, whose only cost for participants is to weather the friendly interrogation the research vice president launches at his lunch companions.

“I want to know, ‘What did you learn? What surprised you? What was interesting to you? What do you think you might want to follow up on?’” he says.

Participants can also apply for a $1,000 grant to further any collaborations that came out of the FAN. About one-third of the 27 FANS that have taken place over the years have inspired grant applications, including the one Bose organized.

Creating an environment where interdisciplinary research is the norm at UVM will take time, Galbraith says.

“FAN is a very conscious effort, but it’s just step one in a long process, whereby maybe people open themselves up more to what else is going on. We’re playing the long game.”