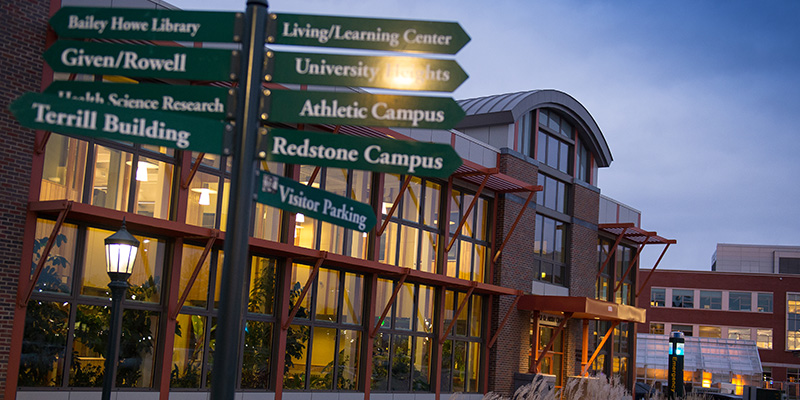 The LEED Platinum Aiken Center, home of the Rubenstein School for Environment and Natural Resources, sources about 40% of its power from 17 solar trackers nearby. (Photo: Sally McCay)

The U.S. Environmental Protection Agency has recognized the University of Vermont as a conference champion of the 2016-17 College & University Green Power Challenge for using more green power than any other school in the America East athletic conference.

Since April 2006, EPA’s Green Power Partnership has tracked and recognized the collegiate athletic conferences with the highest combined green power use within the program. The Individual Conference Champion Award recognizes the school that uses the most green power in a qualifying conference.

According to the EPA, UVM's green power use of nearly 60 million kWh is equivalent to the electricity use of more than 5,400 average American homes annually.

In the 2016-17 challenge, the 36 collegiate conferences and 98 schools competing collectively used nearly 3.2 billion kWh of green power. EPA’s Green Power Challenge is open to any collegiate athletic conference in the United States. In order to qualify, a collegiate athletic conference must include at least two schools that qualifies as Green Power Partners, and the conference must collectively use at least 10 million kWh of green power. EPA will restart the 12th season of the College & University Green Power Challenge in the fall of 2017 and conclude in the spring of 2018.

The University of Vermont has long been a leader in incorporating social and environmental responsibility into many aspects of the institution's functions, including academics, culture, operations and policy. All undergraduate students are required to take at least one sustainability-focused course as part of the general education requirement. Community members take an active role in recycling and using low-carbon transportation systems. UVM has since 1990 had formal programs with local electricity and natural gas utilities, as well as the statewide energy efficiency utility, to reduce energy use and peak demand by buildings. The LEED Platinum Aiken Center, home of the Rubenstein School for Environment and Natural Resources, sources about 40% of its power from 17 solar trackers nearby. The University of Vermont has purchased Green-e certified power for all of its buildings since 2015, in conformance with its 2010 Climate Action Plan.

The Green Power Partnership is a voluntary program that encourages organizations to use green power as a way to reduce the environmental impacts associated with electricity use. The Partnership currently has more than 1,400 Partner organizations voluntarily using more than 40 billion kilowatt-hours of green power annually. Partners include a wide variety of leading organizations such as Fortune 500® companies, small and medium sized businesses, local, state, and federal governments, and colleges and universities.