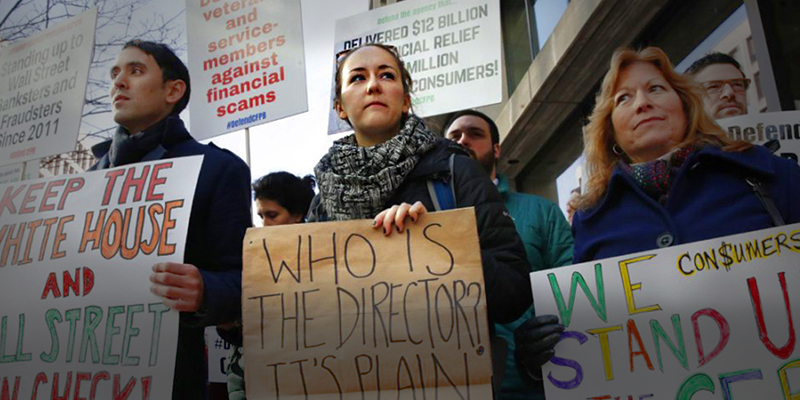 Kaitlyn Vitez ’15 (center) has been empowering and organizing students since her UVM days. Now, as a director with the U.S. Public Interest Research Group (PIRG), Vitez raises awareness and support for policies that help bring the cost of education down. A major priority: text book prices. “I’m not just fighting for college to be more affordable; I’m getting students to make that call.” (Photo: Courtesy of Kaitlyn Vitez)

When Kaitlyn Vitez ’15 packed up her New Jersey apartment two years ago to move to Washington, D.C., she wrapped her fragile kitchenware in loose pages from an expensive textbook. It had been required for an economics class she took senior year and, like many textbooks today, was an unbound custom edition for that class, and was ineligible for re-sell or buy-back programs at the end of the semester. The book had become useless to Vitez—an anthropology and global studies graduate—so she utilized it as best she could.

Ironically, on the other end of that move, the job that Vitez had relocated to D.C. for uniquely positioned her to help other graduates and students avoid those same financial frustrations. As the director of the Make Higher Education Affordable campaign at U.S. Public Interest Research Group (PIRG), she raises awareness and support for policies that help bring the cost of education down for students and graduates, who collectively owe $1.5 trillion in student loan debt.

Since 1970, the consumer advocacy group U.S. PIRG has strived to protect Americans from powerful special interests that influence a range of industries. “In my case, for example, we’re talking about big textbook publishers and student loan servicers that rip off students,” Vitez says.

An average day for her might involve lobbying congressmembers to increase federal Pell Grant spending, strategizing with other organizations across D.C. or student organizers across the nation on college affordability initiatives, or meeting with Capitol Hill staffers to gain support on legislation that protects students from predatory loans or exorbitant fees at on-campus banks.

But one of her major priorities for reducing student debt goes back to her expensive packing hack. Vitez estimates that textbook prices have risen three times faster than inflation in recent years and cost students roughly $3 billion in financial aid each year. “When you’re registering for classes, you should know how much that class is going to cost,” she says about the sticker shock many students experience only after they’ve enrolled in a class.

She is a fierce proponent of opensource textbooks, which offer students free or low-cost access to quality course materials, and played a crucial role in getting a federal opensource program passed. She even jammed House Speaker Nancy Pelosi’s phoneline with calls from hundreds of students supporting funding for the program, which was expected to save them up to $50 million on course materials each year. Funding for the program was subsequently renewed in the latest federal budget.

“It goes to show the power of organizing and why it’s important that we’re not just getting people to volunteer in their communities, but getting people invested in changing how higher education works, and making their voices heard on a higher level,” she says. “I’m not just fighting for college to be more affordable; I’m getting students to make that call.”

Empowering and organizing students is a skill Vitez has honed since her days at the University of Vermont. As president of the student organization for food justice, Campus Kitchens, she led dozens of volunteers and coordinators each week in shifts at the food pantry in downtown Burlington, designed practica for the nutrition department and oversaw summer interns who tended the garden outside of Jeffords Hall. But she knew that real impact—whether it be in the fight against hunger, access to education or consumer protection—begins with policy.

“I was doing a lot of service work and, fundamentally, I was looking to make a bigger change than putting food on the table for folks after graduation. While service work is really important, what’s more important is preventing people from having to get in line at the food pantry in the first place,” she says. “I wanted to find a job that was going to give me the skills to make larger systemic change and have a much bigger impact.”