Office of the Provost

Office of the Provost 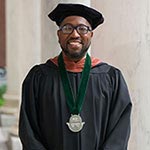 Professor Major Jackson is the Richard Dennis Green and Gold Professor of English. Professor Jackson has achieved national and international eminence in the field of poetry. He is widely recognized as one of the leading poets in America today and an influential voice in contemporary American poetry.

Professor Jackson has authored hundreds of poems, five books, and contributed to over 40 published anthologies. His work has appeared in many online and print outlets, among these The New Yorker, American Poetry Review, Boston Review, and The New York Times. Professor Jackson’s work has received critical attention in the Boston Globe, the Christian Science Monitor, The Philadelphia Inquirer, The Washington Post, and on National Public Radio. He is the recipient of some of America’s most prestigious awards, including a Guggenheim Fellowship and a National Endowment for the Arts Artist Fellowship.

Professor Jackson, you are recognized by America’s poets as one of the best writers of your generation and I am honored to recognize your accomplishments by granting you the title of University Distinguished Professor of English at the University of Vermont. 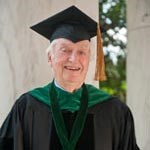 "Dr. Jerold F. Lucey is Professor of Pediatrics in the Department of Pediatrics, UVM College of Medicine.   He was Chief of Newborn Services at Fletcher Allen Health Care from 1970 to 1990 and Editor-in-Chief of the prestigious journal Pediatrics for more than 30 years.

Dr. Lucey’s pediatric career spans more than 50 years at the University of Vermont.  He continues to excel as an outstanding scientist, educator, mentor, caring clinician, and friend to the thousands of infants, children, families and colleagues who have been influenced by his outstanding contributions to pediatrics. Dr. Lucey is the consummate leader in the field of Pediatrics.

One of Dr. Lucey’s nominators wrote, “in reflecting upon the criteria that warrants the title of University Distinguished Professor, Dr. Lucy meets those criteria as if he were hitting a home run with the bases loaded.”

Dr. Jerold F. Lucey it is an honor and a privilege to award you the title “UVM University Distinguished Professor of Pediatrics.” 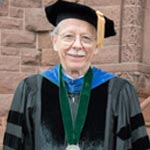 I should begin, of course, with a Proverb, suggested by one of the many young scholars for whom Wolfgang has provided opportunity.

Wolfgang Mieder has been an esteemed member of the faculty at the University of Vermont since 1971. Beginning as assistant professor, he rose to the top rank of full professor in the Department of German and Russian within just 7 years. He served as chair of the department for thirty-one years, from 1977 to 2008. He has contributed to this university in countless ways as a faculty member, administrator, mentor, friend. His expertise is in the areas of German and international folklore, the history of the German language, the Middle Ages, and especially paremiology, the study of proverbs.

In fact, Professor Mieder is widely considered the leading scholar in the world in the study of proverbs. He has spent decades collecting and studying proverbs covering a wide range of topics and languages, from their use in ancient history to today’s slang.

Most recently, Professor Mieder has published a series of books on the rhetoric of heads of state and social leaders, including Abraham Lincoln, Frederick Douglass, Charles Dickens, Harry Truman, Winston Churchill, and Barack Obama. For his study on his hero Martin Luther King, Making a Way out of No Way: Martin Luther King’s Sermonic Proverbial Rhetoric, he read some 6,000 pages of King’s published texts, collecting, cataloguing and analyzing the proverbs in the process and thereby telling the story of King’s life, a biography in proverbs. His comprehensive index contains 1,092 proverbs used by King, each shown in every context that King used them, sourced and dated. The title, Making a Way out of No Way, is an African American proverb of unknown origin and for Professor Mieder characterizes King’s struggle for universal rights, more so perhaps than the better known, “I Have a Dream.”

Scholars also credit Professor Mieder with widening the concept of the paremiological minimum, that is, that a certain set of proverbs must have (or have had) currency for a substantial period of time, which in turn demonstrates the central role proverbs play in linguistic and cultural communication. He is also the creator of the term “anti-proverb” for proverbs that are twisted from their original wordings and structures.

Since 1984, he has been the founding editor of Proverbium: Yearbook of International Proverb Scholarship published right here at the University of Vermont. With over 200 authored or edited books, 450 articles, 120 reviews, and 325 invited addresses, he is indeed a most prolific scholar in the world of proverbs and folk narratives.

As a folklorist, he is the first scholar to receive the 3 highest most prestigious world-wide awards: the Pitré International Folklore Prize, the European Fairy Tale Prize, and the Lifetime Achievement Award from the American Folklore Society.

For his 60th birthday, he was honored by three Festschrift publications and again with another volume on his 65th birthday here at the University of Vermont.

A final proverb: “Nothing is done while anything remains to be done.”

Wolfgang has never been in danger of getting nothing done.

Professor Wolfgang Mieder, it is an honor and privilege to award you the title “University Distinguished Professor of German and Folklore”. 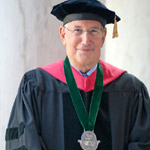 Although we are proud to call you our own, you have served as a visiting professor at the most distinguished medical schools in our country. I can personally note the difficulty I had in trying to electronically send your vita to reviewers, as with its listing of nearly 900 scholarly articles it was too large to ship in one file.

As one reviewer noted, “I can think of few other leaders in cardiovascular research to whom this title should apply, and know that were he to be granted the title, he would serve in that capacity beyond expectation.”

Dr. Sobel's Professorship will be conferred at a later date.” "Judith L. Van Houten, University Distinguished Professor of Biology. Professor Van Houten, you are identified as a world leader in chemosensory sensing using the unicellular Paramecium as a model organism. The originality and high quality of your research are clearly evidenced by the nearly continuous research funding you have received over three decades from the NSF and the NIH, including the prestigious NIH Merit Award.

In addition to authoring hundreds of scholarly works, you have received more than $30M in major research funding, much of it selflessly directed to supporting your colleagues at UVM and around the State.

Your colleagues around the nation, from the highest levels of the academy, speak of your distinguished service and leadership in addition to your remarkable scholarly achievements.

Judith L. Van Houten, I am pleased to recognize you as University Distinguished Professor of Biology.”

"Dr. Susan S. Wallace is Professor and Chair of the Department of Microbiology and Molecular Genetics in the College of Medicine and College of Agriculture and Life Sciences.  Dr. Wallace is an outstanding scientist, sought-after collaborator and international leader.

She has made significant contributions to biomedical science and specifically the field of radiation research.  Since her first publication in 1969, she has built a body of over 160 publications during a career that spans the genetic revolution as well as the exponential growth of radiation oncology as a field of scientific research.

Dr. Wallace has been continuously funded by the National Institutes of Health since 1971.  She recently received an NIH Program Project grant award to support a new translational research effort exploring if certain DNA repair protein variants in the human population increase the risk for some types of cancer.

Dr. Wallace is a world-class scientist and teacher and she does great honor to the UVM University Distinguished Professor program.

Susan S. Wallace, I am pleased to recognize you as University Distinguished Professor of Microbiology and Molecular Genetics.”