Today I would like to introduce Menelaos (Mel) Symeonides as our next featured postdoc. If that sounds Greek to you, you are right, he is actually from Cyprus, a small island in the Mediterranean Sea. Only God knows why he moved to Vermont, trading lots of sun and the sea for snowstorms and freezing temperatures. He really seems to like it here though. He joined UVM for his PhD in 2009 (in the CMB program) and moved on to a postdoc position in 2015 under the supervision of Markus Thali. You can find Mel in Stafford Hall working with various microscopes, most recently with a light sheet microscope. In light sheet fluorescence microscopy (or single plane illumination microscopy), the sample is illuminated at right angles to the detection axis, rather than through the detection objective. Only a small, very focused (about 1-2 μm thick) sheet of excitation light is formed in alignment with the focal plane of the detection objective. Therefore, unlike with confocal scanning microscopy, the whole field can be imaged at the same time, allowing very rapid epifluorescence-like imaging speeds (but without needing to illuminate the entire sample column just to image one focal plane), along with confocal-like sectioning ability. This also benefits the exposure time, which can be kept extremely short, making light sheet microscopy very useful for long term, large-volume live cell imaging, minimizing phototoxicity and photobleaching. Further, it can be adapted for super-resolution imaging (by structured illumination, using the lattice light sheet format). Next to light sheet microscopy, Mel also has lots of experience with various other fluorescence-based methods including flow cytometry and epifluorescence microscopy for both live and fixed samples.

While studying Genetics at the University of York in York, UK, Mel spent a year working at AstraZeneca, looking for promoter hypermethylation in breast and ovarian cancer, as part of his degree work. He finished his undergraduate studies with an Honors project on Drosophila flight muscle biology. Since Mel wanted to do a PhD, and his undergrad thesis advisor had spent a sabbatical at UVM, he came here to study HIV transmission and HIV-induced syncytia with Markus Thali in the MMG department. Syncytia are the product of cell-cell fusion, and occur as part of normal physiology, as well as, during infection. One example is osteoclast cells, which develop from self-fusing macrophages and can have between 2 and 10 nuclei. In the case of HIV infection, cell-cell fusion is now emerging as a previously unappreciated major facet of in vivo pathogenesis, as we now know that ~20% of HIV-infected T cells in the lymph node are multinucleated, with 2 to 5 nuclei. Mel has been investigating how host factors are utilized by HIV to repress cell-cell fusion, thus possibly enhancing its fitness, and his latest work (also utilizing light sheet microscopy) focuses on the population-level effects of cell-cell fusion during HIV infection and spread. Working with HIV requires a BSL2+ lab, which involves some additional safety precautions like autoclaving of all waste before removal from the lab, bleaching of all liquids, and lab access restriction to people who have received appropriate training. It is not as bad as in movies like “Outbreak” but I hope you get a sense for the differences from an ordinary lab.

Mel’s passions next to working in the lab are his two cats, growing vegetables, cooking, and playing guitar (although he does not have a band right now). 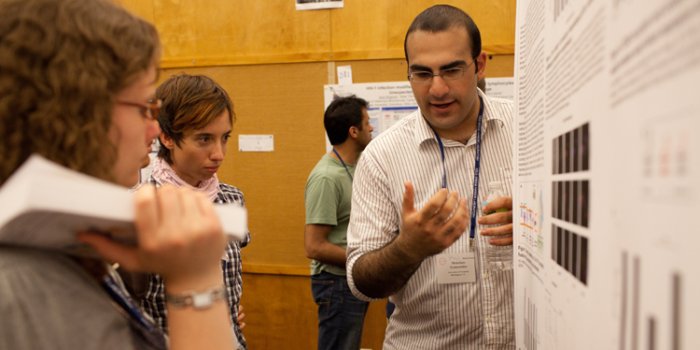