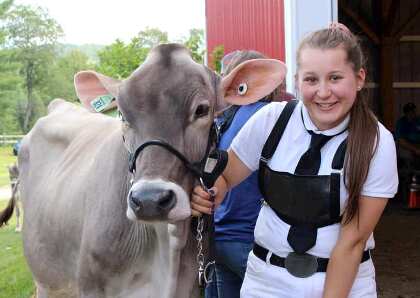 The exhibitors qualified for the show, which was held at the Caledonia County Fairgrounds in Lyndonville, through their 4-H dairy project records, interviews, participation in a local 4-H dairy show and community service activities. Judging the event were Richard Caverly, Benton, Maine (Ayrshires, Brown Swiss, Jerseys and Junior fitting and showing) and Reid Lundy, Argyle, New York, (Holsteins, Guernseys, Milking Shorthorns and Senior fitting and showing)

University of Vermont (UVM) Extension 4-H organized the event in conjunction with the fairgrounds and Caledonia County 4-H Foundation, which hosted a BBQ for participants the evening prior to the show. Other sponsors included Bates Farm, Home and Garden, Enosburg Falls; the Montpelier Veterinary Hospital, Montpelier; Poulin Grain, Inc.; and other area businesses.

In fitting and showing classes, arranged according to the exhibitor's age, the 4-H'ers were evaluated on their poise and presentation and handling of their animal. The first-place winner in each of the age groups competed for the Senior (14-18) and Junior (11-13) championships.

The youths also competed in conformation classes, arranged by age and breed of the animal, with scoring based on the physical structure, condition and appearance of the animal.

Several special awards were presented at the dairy show including the Friend of 4-H Award, which recognizes an individual or business that has been a long-time supporter of 4-H programs. This year the award was given posthumously to Carol Cuthbertson, who passed away in February. She was an active Caledonia County 4-H volunteer who, with her family, ran the 4-H dormitory in the Moses Building at Eastern States Exposition in West Springfield, Massachusetts, each fall.

Derby 4-H'er Olyvia Fortin was selected by show participants to receive the first annual Sportsmanship Award. It was given in memory of Cuthbertson by her husband Maurice "Butch" Cuthbertson of Waterford.

Amy Parent of St. Albans received the Ed Gould Award. The award goes to an adult who demonstrates leadership and strong support of the Vermont 4-H dairy program just as Gould, one of Vermont's top cattle breeders, did.

In addition, 30 of the top exhibitors were chosen to compete in the New England regional 4-H dairy show at Eastern States Exposition in September.

Issued in furtherance of Cooperative Extension work, Acts of May 8 and June 30, 1914, in cooperation with the United States Department of Agriculture. University of Vermont Extension, Burlington, Vermont. University of Vermont Extension, and U.S. Department of Agriculture, cooperating, offer education and employment to everyone without regard to race, color, national origin, gender, religion, age, disability, political beliefs, sexual orientation, and marital or familial status. 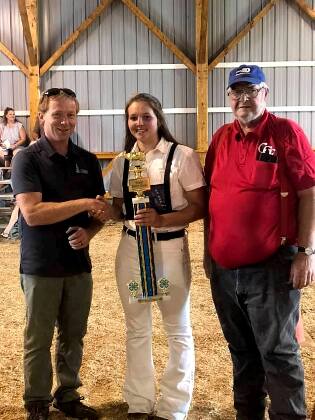 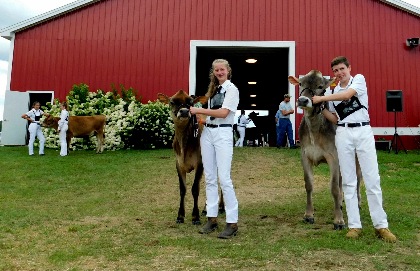