VCHIP and Shaw Improve Pediatric Care through Collaboration in Vermont and across U.S 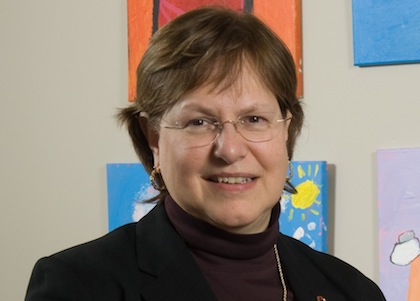 First there was Vermont, then Utah and New Mexico. Now there are 21 states across the nation for which the Vermont Child Health Improvement Program at the University of Vermont College of Medicine has served as a model. Together, these organizations form the National Improvement Partnership Network (NIPN), which expands the concept of advancing healthcare quality for children across state lines and allowing for projects to have a broader reach.

The founder of this movement is Judy Shaw, Ed.D., M.P.H., R.N., who in addition to serving as executive director of VCHIP since its founding in 1999, wears a couple other hats: She’s a UVM associate professor of pediatrics and nursing and head of NIPN, a multi-state coalition of child health programs that is also housed at UVM.

No matter the title, Shaw’s most important job is that of collaborator. She spends much of her time bringing together various entities invested in the well-being of Vermont’s youth – state health officials, physicians, UVM researchers and faculty, Medicaid representatives and potential funding sources – and figuring out ways to enhance their care of children.

“We are constantly bringing in money from all over the place to benefit the kids in this state,” Shaw says.

Her work helped VCHIP win the Outstanding Collaboration Award this year from the KidSafe Collaborative of Chittenden County, which works to prevent child abuse and neglect. KidSafe will officially present the award to VCHIP at its annual luncheon on April 16.

“The KidSafe Awards Selection Committee was very impressed by VCHIP’s accomplishments on behalf of child health and safety in our community and throughout Vermont, through your partnerships with many organizations,” states the group’s letter to Shaw announcing the honor.

Last fall, for example, the Centers for Disease Control provided a five-year $300,000 grant to the Academic Pediatric Association (APA), which solicited the help of NIPN and other institutions to enhance primary care physicians’ delivery of the human papillomavirus (HPV) vaccine to adolescents. For the first year, the work will focus on increasing vaccination rates in 65 primary care practices and tracking their progress, according to the APA.

VCHIP has become the “go-to” resource for any efforts to improve pediatric care in Vermont, says Shaw.

“Doctors don’t get paid to stop and measure how they’re doing and think about how to improve it,” she explains. “What we do in VCHIP is help the physicians look at the systems obstacles that stand in the way.”