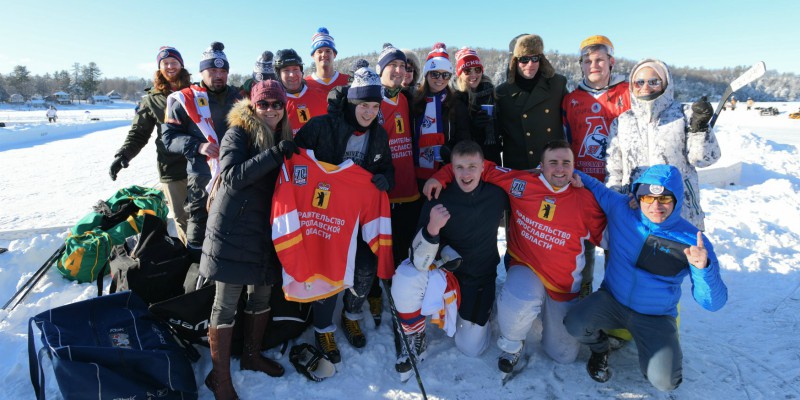 On a cold day during the recent Lake Champlain Pond Hockey Classic, one team in particular turned heads, if only for their Cyrillic-lettered jerseys. Members of the visiting delegation from Yaroslavl, Russia, formed a hockey team that took to the ice against other pickup teams from the region. Their visit was the latest cultural exchange in the "sister city" arrangement between Burlington and Yaroslavl, a city of 600,000 northeast of Moscow.

A benefit to students studying Russian at UVM is the annual visit from a delegation of citizens from Burlington’s sister city Yaroslavl, Russia. The partnership began in 1988 as a gesture of goodwill focused on building non-political, people-to-people connections between citizens of the two countries.

Each group of Yaroslavl visitors spends time on the UVM campus. For Lecturer Julia Katsnelson and her colleagues it’s an opportunity for students to practice their conversational Russian skills and learn about Russian culture.

“This year we invited all of our students from first-year to seniors to host the group for lunch and show them around campus,” she said. “Meeting them also creates a really strong cultural connection. Students feel as though they have a new set of friends in Russia.”

“I was pleasantly surprised that my Russian proficiency was advanced enough to be able to hold conversations with the guests on a wide range of topics, including life at UVM, sports, and cultural differences,” said Stepan Casey '21.

Yaroslavl is a city in central Russia located about 150 miles northeast of Moscow on the Volga River with a population of 650,000. Yaroslavl recently celebrated its 1000 year anniversary.

The 2016 visit included theater professionals from Yaroslavl, who were delighted to attend the UVM theatre department performance of Anton Chekhov’s play The Seagull that spring.This year’s delegation included several specialists in sport and physical culture, and they timed their annual visit to coincide with the Lake Champlain Pond Hockey Classic, an annual outdoor hockey tournament held on the frozen lake. Many of the visitors are vigorous amateur hockey players, and wanted to represent their city.

The February tournament roughly coincided with the 40th anniversary of the 1980 Lake Placid Olympics, when the American hockey team won a memorable upset victory over the Soviets. The Yaroslavl players were greeted with good-natured cries of “The Russians are coming!” The team wore red jerseys with the image of a bear—the central figure on Yaroslavl’s official city emblem.

Yaroslavl State University and UVM have sponsored programs for graduate and undergraduate students in both countries. Over the years, 20 YSU students have earned MBA degrees at UVM. Currently, UVM Russian undergraduates have the opportunity to study abroad in Moscow and St. Petersburgh through the Council on International Educational Exchange (CIEE). Katsnelson hopes the close relationship between UVM and Yaroslavl can lead to a formal exchange program with YSU or another university there.

“I know there have been preliminary discussions,” she said. “It’s at the exploration stage but it would love to build on the relationship.”