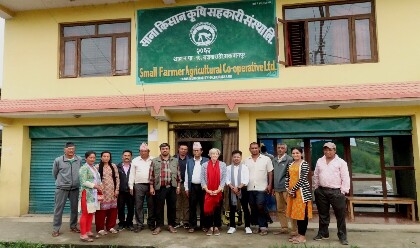 Dr. Ann Hazelrigg (center with red scarf) gathers with a group of Nepali farmers in front of the Small Farmer Agriculture Cooperative at the conclusion of her visit to Nepal's Makwanpur region to help co-op members learn how to manage clubroot, a destructive plant disease. (photo: Sushil Subedi)

Burlington--Dr. Ann Hazelrigg, University of Vermont Extension plant pathologist, recently returned from Nepal where she worked with farmers to help them manage clubroot, a destructive disease of brassicas, a plant genus that includes cabbage and other cruciferous vegetables.

Hazelrigg was invited by the U.S. Agency for International Development Farmer-to-Farmer Program led by Catholic Relief Services, an international non-profit humanitarian agency that promotes sustainable economic growth, food security and agricultural development. In Nepal she worked with the Small Farmer Agriculture Cooperative, comprised of 173 farmer groups and 1307 active members in the Makwanpur region of Nepal, 48 miles southwest of Kathmandu at an elevation of around 7,620 ft.

The region is known for its off-season vegetable production with 90 percent of the population dependent on agriculture. Farmers grow potatoes, chili and bell peppers, garlic, cauliflower, cabbage and tomatoes for markets in Kathmandu and other area cities.

Vegetable production, typically on terraced hillsides, represents 70 percent of the income for these small farmers. In some years, the cabbage and cauliflower crops are a total loss due to a soil-borne disease called clubroot.

Makwandpur area farms are typically very small, often less than an acre, so farmers cannot afford to rotate away from the lucrative brassica crops for the length of time necessary to decrease the number of resting spores of the pathogen. Although clubroot is present in the Northeast, farmers have a larger land base and are able to rotate out of susceptible crops for several years, thus avoiding a buildup of the disease.

"The clubroot pathogen causes the roots to form galls, sometimes the size of tennis balls, restricting the uptake of water and nutrients, which results in wilting, stunting and death of the plants," Hazelrigg explains. "The galls break down in the soil, releasing billions of resting spores that can survive at least 10 years without a host. After four years, the number of resting spores decreases by half, so rotations out of the susceptible crop optimally should be at least five to seven years."

Since the destructive disease cannot be controlled with pesticides, her goal was to teach the farmers how the pathogen lives and infects plants and how to use several cultural practices to limit the spread and severity of the disease on their farms. With an interpreter, Hazelrigg worked with two groups of about 25 farmers each over the course of a week, presenting information on the pathogen's lifecycle, integrated pest management (IPM) and pesticide safety in addition to covering soil health, soil pH and fertility.

Each group participated in farm visits with her to identify and diagnose the disease and other foliar and root diseases of brassicas. They also learned how to manage the disease using several IPM approaches such as rotation of brassicas with non-susceptible crops, using transplant beds and increasing soil pH since the pathogen is inhibited at higher pH levels. Hazelrigg also recommended using clubroot-resistant seed although the farmers balked at this due to cost.

Since the co-op has land and a high tunnel at its headquarters, the plant pathologist encouraged members to take advantage of these resources to set up replicated plots to test some of the concepts discussed. With the high tunnel, the co-op can control irrigation and eliminate rainfall as a factor in the trials. By comparing resistant vs. susceptible seed and tracking the yield and cost of seed, she believes that farmers may find the increase in yield offsets the more expensive seed.

"Most farmers were growing their transplants in the same bed year after year and introducing already infected plants into their fields," Hazelrigg notes. "Through demonstrations at the co-op's farm, members can see the benefits of rotating transplant beds and adding compost to keep soils biologically active."

This is Hazelrigg's sixth trip to the country to help educate farmers about disease and pest issues.

"The highlight of these Nepal assignments are working with the farmers," she says. "They are all so welcoming and appreciative that someone has traveled so far to help them."

On her most recent trip she was invited to a local family's home for an evening meal that included a special labor-intensive Nepali dish called dhido, which is similar to polenta but made with flour and water.

"I always feel so fortunate when I get to experience a different way of life and participate in these simple joys like a shared meal.” Hazelrigg says. 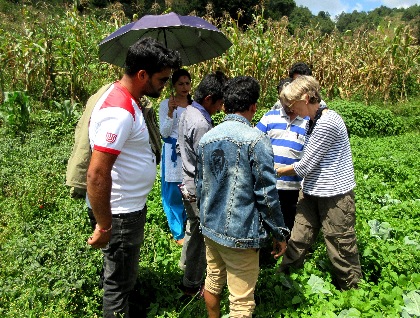 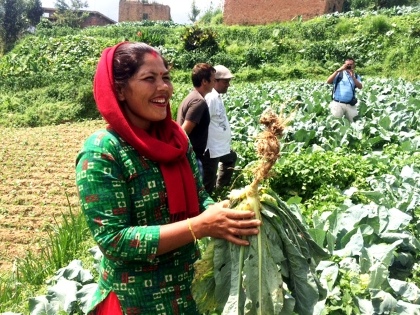 A Nepali farmer examines a plant for clubroot during a farm visit. (photo: Ann Hazelrigg)