Finding renewal in the borderland 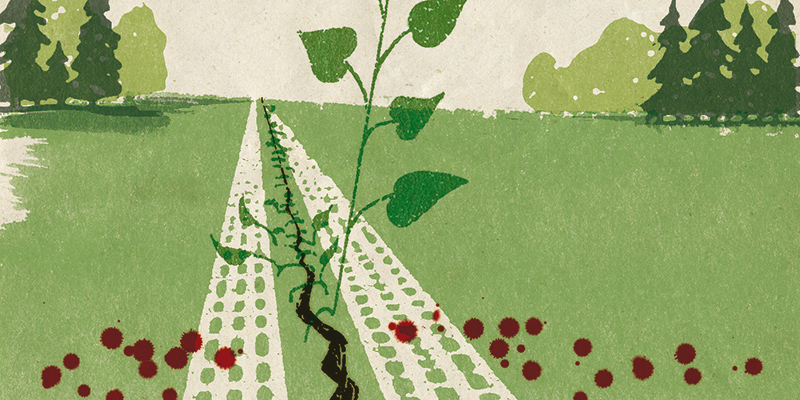 A cool morning mist raised goose bumps on my skin when I set out on the Goethe Trail. I had picked this particular trail because it offered the most direct access to where I wanted to go, but the idea of hiking in the footsteps of the great poet-thinker-naturalist-all-round-genius certainly added to the appeal of my quest.

Where I wanted to go was the Harzer Grenzweg, the trail in Germany’s Harz Mountains that traces the former border (Grenze) that divided the country for forty years.  For most of that time, this had been one of the deadliest borders in the world—a high-security strip cleared of all vegetation and studded with land mines, watch towers, and booby-trapped fences.

By the time I set foot on the Goethe Trail in September 2014, the border had lost its grim purpose and the two Germanys had been reunited for almost twenty-four years. By now there was a whole generation of young Germans for whom the four-decade-long division was a strange but largely irrelevant chapter in history books.  Yet here I was, pulled from my Vermont life by an irresistible longing to hike along the former border.  I had crossed it many times by train and on the Autobahn, had reveled in my explorations of eastern Germany (the ‘other’ Germany for the first half of my life), had made friends with easterners—and still, this urge to spend time in the border strip had only grown stronger.

It was not so much the brutal history of the border that pulled me, though that had certainly been on my mind. There was also, thankfully, an uplifting element to my fascination. Ironically, because humans had been kept out of the border strip, some 1,200 species of rare plants and animals—like the peregrine falcon—had found a refuge there from the relentless pressures of development and agriculture on both sides. Almost immediately after the fall of the Berlin Wall, naturalists from both sides of the border came together to call for the creation of a nature preserve in place of the 900-mile border strip between the two German states. A seventy-mile stretch of the resulting Grünes Band (Green Belt) was now part of the Harz National Park, which had started out as two separate national parks in East and West Germany but had later been combined.

I had been uncertain what to expect of the forest in the National Park, even outside of the former border strip.  On a cross-country ski excursion some fifteen years earlier, it had struck me as looking more like a spruce plantation than a forest: A legacy of the Harz region’s centuries-long history of silver, copper, lead, and zinc mining. From the eighteenth-century on, the largely destroyed native forests had been replanted with fast-growing spruce rather than the beech that would have been typical of the region’s mid-elevation. A more hands-off approach was adopted in the 1870s.  I was relieved now to find myself in a lush, uneven-aged stand of beech and spruce—a clear sign that ecological processes, rather than human management, were at work here.

Half an hour later and a few hundred feet higher in elevation, the trail traversed what looked like a ghost forest—an expanse of dead spruce.  On second glance, I noticed some clearly alive spruce and mountain ash saplings. An interpretive sign explained that this area had been hit by a bark beetle attack a few years earlier.  In keeping with national park management guidelines, the spruce stand had been left to its own devices.  The saplings hinted at a future forest much more typical of this elevation—ecological succession was indeed unfolding.

From my trail map, I knew I had to be close to the Grenzweg now.  And indeed, the trail was now palpably changing under my feet. Early on, it had alternated between a wooden walkway and a trampled footpath. Now my feet could feel a grid of concrete, overgrown but clearly recognizable as two parallel tracks. I knew that this was the Kolonnenweg, the pathway installed by the East German regime for border patrol vehicles.

I really was in the former death strip now. For anyone who didn’t notice the concrete grid, there was a large wooden sign pointing out this fact.  Across from it, four people were sitting at a picnic table, engrossed in conversation over thermos bottles and Butterbrote, homemade sandwiches wrapped in parchment paper.

Throughout the morning, I had wondered how other people felt about hiking in this history-heavy place.  Was it as meaningful to “normal” Germans—those who had everyday lives here—as it was to me? I decided to approach the four and ask.

Clearly the conversation had been about entirely different things before my interruption, but the picnickers, two couples perhaps in their early seventies, indulged me and switched topics to share their reflections about the border. One of the two men had escaped from East Germany with his parents as a child. He had only seen his grandparents once after that; they had died before reunification.  The other man told of an aunt in the east whom he had met for the first time on the day after the border opened in 1989, and who died two weeks later. Both couples remembered hearing about a nine-year-old boy who had run after a ball into the border strip and been shot by East German border guards.

Deep in thought, I continued on the overgrown concrete-grid path. Aside from the concrete itself, there was no trace of the deadly contraptions that had been here until twenty-five years ago. The forest around me was certainly not old growth, but then the rest of the forest wasn’t either.  All in all, the place had a serene feel to it. The stories of disruption and grief were part of its history, but so were the stories of recovery and resilience. I could see signs of that all around me in the forest, and I had just heard and felt it in the conversation with the four hikers.

I could also feel it in myself. Hiking back towards the Goethe Trail that afternoon, I was reminded of Ralph Waldo Emerson’s words: “In these woods, we return to reason and faith.”  I had long felt drawn to “the woods” as a place of refuge, a place to regain perspective and renewal.  In fact, the woods were, in large part, what had brought me to Vermont. I felt grateful now that Emerson’s words felt true in these German woods as well. In these woods here, I felt myself returning not only to reason and faith, but to a deeper bond with my complicated home country.