Tell me what (cheese) you eat…

In his new book, UVM food scientist Paul Kindstedt explores the history and influence of cheese 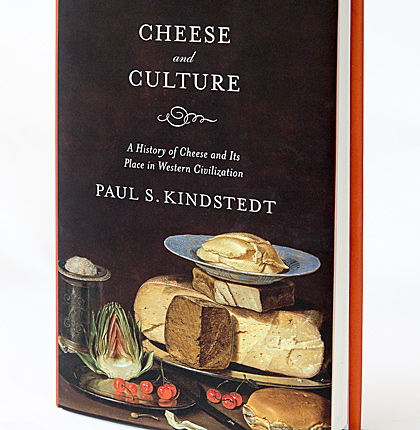 Paul Kindstedt headed off on a detour, a little side trip that morphed into an odyssey spanning nine thousand years. And the thing about epic journeys is—even for a mild-mannered cheese scientist—they can alter your life.

A hint of that transformation is in the title of his new book (and a course he teaches at UVM), Cheese and Culture: A History of Cheese and its Place in Western Civilization. Kindstedt is a professor of food science with an expertise in the technology of cheesemaking—elucidating the physicochemical and biochemical processes that influence the functional characteristics of mozzarella is one of the many research interests listed in his bio. He built a career helping large industrial cheese producers perfect their products for a mass market

But Kindstedt began to change course while writing the 2005 American Farmstead Cheese: A Practical Guide to Making and Selling Artisan Cheeses (Kindstedt also co-directs VIAC—the Vermont Institute for Artisan Cheese at UVM). He wanted to include some contextual history but, four months into the writing of two chapters, Kindstedt realized he was treading into a thicket of tangled, largely unexplored territory. He knew there was an important story to tell, one that would connect today’s traditional cheesemakers with their ancient roots, but it would require much deeper research.

Helping small producers flourish became the rationale for following the trail through art, religion, literature, classics, archeochemistry, archeoclimatology… areas and methods of research both foreign and thrilling to Kindstedt. Wherever a specialist in one of these areas made a passing reference to cheese, the scientist, looking through “a different set of eyes,” found a piece of his complex puzzle (“Whoa, that’s global climate change shifting the whole direction of cheesemaking in Europe!”), eventually, painstakingly building the first comprehensive narrative of when, how and why hard sheep pecorino was developed in one place and soft-ripened cow’s milk cheeses in another. He tells us how the landscape, the climate, the economy, the politics shaped the cheese and, equally so, how cheese came to shape the cultural identity of the people and the place where it’s made. It’s not an understatement, Kindstedt says: “Cheese helped shaped everything in terms of who we are.”

That begins with human survival. Cheesemaking was discovered around 7000 B.C. as devastating overuse of land in the once fertile crescent made the soil suitable for grazing small ruminant animals if not growing crops. With the advent of pottery for collecting milk and the realization that adults, then universally lactose intolerant, could consume dairy once it coagulated and the whey was separated from curds, cheese became a dietary staple.

Jumping forward several millennia, Kindstedt argues that the Roman Empire lasted five hundred years, at least in part, because they were accomplished cheesemakers. “The reason why they were able to hold these vast areas,” he says, “is because when they set up a fort or new province they immediately established an agricultural installation. They took the technology of sheep milk cheesemaking—and wool production for blankets and clothing—and made that the basis of a military provisioning network that enabled them to permanently station a half million troops on a 10,000-mile border.”

A favorite example of Kindstedt’s that gets to the synergy between the place and the cheese is the rugged alpine cheeses of central Europe. That story begins around the start of the fourth millennium B.C. when there was a dramatic global climate shift that led to long, severe winters and warmer wetter summers in this part of Europe, wreaking havoc on the Neolithic peoples huddled in the river valleys along the Danube and the Rhine, most of the land being too heavily forested to cultivate crops or graze animals. But over the long term, the extreme cold caused forestlands to thin, enabling people to move to higher ground, clear and cultivate fields. It also caused tree lines to recede down alpine slopes as much as a thousand vertical feet. By 2500 B.C. there’s evidence of people moving animals up the mountaintops to graze in the summer, turning their milk into hard cheese to stockpile for the winter while cultivating crops below.

What began, then, as a survival strategy became an embedded part of the culture in many parts of Austria and Switzerland. “It persists to this day,” says Kindstedt, “because it’s part of local life, part of local identity. The movement of the animals up in the spring becomes this enormous cultural celebration—when they come back down there’s another celebration. It’s part of the identity of the people themselves.”

Despite the success of VIAC and the surge of popularity in artisanal cheeses, particularly in Vermont, Kindstedt believes that Americans have historically missed out on this deep sense of place connected to food. “Those traditional technologies that did arrive from Europe were changed as the cheese industry changed,” he says.

Americans’ lack of a shared identity around food, Kindstedt believes, is due to our relentlessly mobile society in contrast to Europe where people have commonly lived and died in the same place where their great grandparents did.

“We’re always moving,” he says. “Culture is shared collective experience over time. Since the late fifties and sixties when I grew up so much of our food culture has been fast food. I’m sad to say that is what so many Americans can identify with. That is changing now. We’re beginning to realize that we’ve lost something. Some people think that changes in the food system caused all the problems, but the food system followed the culture. We did it ourselves. It didn’t help that the food industry was really good about keeping us happy with where we wanted to go.”

So what now of that career as a scientist working on behalf of industrial cheese production? “Before, I had begun to dabble in artisan cheese making but I didn’t have a big picture of this whole cultural thing,” Kindstedt says. “The writing of this book, it literally changed my life and my perspective. I don’t have the heart any more.”

Just before going on sabbatical to research and write, Kindstedt was working on strategies to prevent the formation of calcium lactate crystals that form on the surface of cheeses like cheddar—tasteless, odorless, utterly harmless, yet perceived as a defect by consumers and therefore a bane to the industry. Now he’s turned that project on its head.

Kindstedt argues that artisanal cheeses are more vulnerable to crystal formation than commodity cheeses because of the way they’re made, their generally longer aging process. He knows how to stop it—or he could be close—but his new effort is to educate consumers that uniformity isn’t the goal. Crystals, like a bloomy rind, are a signature of traditional practices.

There’s soul in that imperfection. Or maybe it’s a new definition of perfection, fewer cosmetics, more signs of time, and grounding in a place.