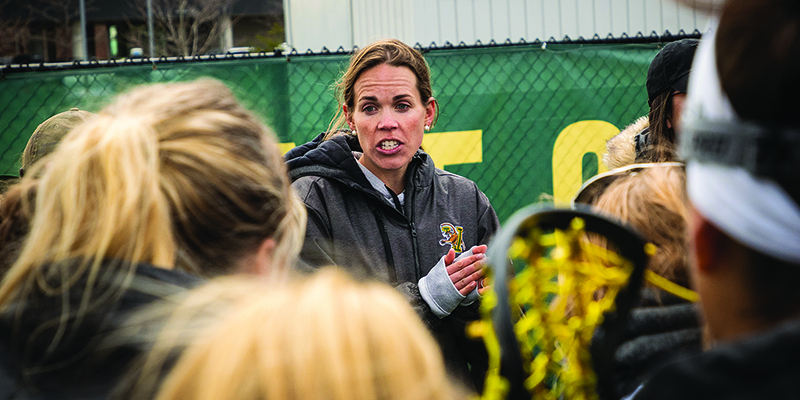 On the sidelines of a matchup with rival Dartmouth, women’s lacrosse coach Sarah Dalton is watching with quiet intensity. She’s standing stoically, except when you look down: her toes are tapping nervously in white-and-green Adidas. “I’m passionate,” says Dalton, “in terms of caring about the team, the program, the game. But I’m not someone who is ra-ra, jumping around.”

Loud is not the Vermont native’s coaching style, which leaves plenty of room for the players at her back to cheer for every teammate, throughout all sixty minutes. That collective mindset, says Dalton, has been one of her biggest goals in her three years at the helm. “Team first, that’s our culture. What you’re doing, the work you’re putting in? It’s all toward the team.”

And the program is making strides. The team kicked the 2019 season off with a 7–1 run, their best eight-game start since 2014, before falling to a series of America East opponents. Last year, Dalton led the team to achieve the third-best win improvement rate in Division I; the year before, the Class of 2017 left with thirty career victories, tied for fourth-most by a graduating class. “We know we need to keep pushing our program forward,” says Dalton, “and I tell our girls that every year, it’s going to get harder.”

Among the standouts this season: low defender and captain Micaela O’Mara ’19, “incredibly determined for the team to do well,” says coach Dalton; the “backbone of who we are,” goalkeeper Maddy Kuras ’19; “one of the most competitive people we have on our team,” Grace Giancola ’21; and offensive transfer Elise Koehl ’19. Plus, “the freshmen as a whole are just outstanding. Their dynamic is what you want in a class, they raise our level in the weight room, and they’re great lacrosse players,” says Dalton.

Growing up in Cornwall near Middlebury College, Dalton “got to see the best of the best at a young age, seeing teams playing at high levels, winning championships.” Sports were a big part of life—basketball, ice hockey, soccer, and, of course, lacrosse. Eventually, she went all-in on lacrosse, and ended up with an offer to play at Boston University.

“I can’t speak enough to my time at BU, and what that program gave me in terms of friendships and life skills,” says Dalton. Playing at that level, and the commitment it took, was eye-opening. “It was the first time I was finding other females who were as driven as I was.” That’s something Dalton brings to her players today. “We talk a lot about how it’s OK to work hard.”

Her college coaches left a lasting impression, including Liza Kelly (now head coach at University of Denver) and Liz Robertshaw. “Liz was the first person that really talked about the full student athlete package. It wasn’t just you as a lacrosse player, she cared so much about you as a student in the classroom, how you interacted with other people in the department.” She heard echoes of that philosophy when she met athletic director Jeff Schulman ’89 G’03. “He wants the student athletes to have the best experience,” says Dalton. “It’s not just on the field, it’s in the community, in the classroom, and in the culture.”

In 2009, Dalton graduated from BU with a degree in psychology, and finished her career as the most accomplished offensive player in school history. Post-graduation, she became an assistant coach with William & Mary, and then she took a year off to work with her father at College for Every Student, a nonprofit focused on helping underserved students prepare for, gain access to, and succeed in college. “It was one of the hardest years of my life, but probably the best thing I ever did,” says Dalton. While there, she managed a partnership that paired college student athletes with students from low-income area schools; today, she still forges those types of bridges between Catamounts and aspiring players by hosting camps and clinics. “I loved it, but I realized how competitive I was, and that I loved coaching. In life you don’t get many mulligans,” laughs Dalton, “and I got one to go back to Notre Dame.”

In each of her four years as an assistant coach and offensive coordinator with the Fighting Irish, the team earned a top twenty national ranking and a spot in the NCAA Tournament. But, says Dalton, “I knew if I could, I would want to return to Vermont.” It was all about getting back to the Green Mountains, not chasing a title. “With other places I lived, I realized how special and unique Vermont is.”

Back on Virtue Field, head coach Dalton brings the team in for a huddle. They’ve lost to Dartmouth, but that’s not the point of this post-game regroup. “Rest up. Recover. The focus is on the next game,” Dalton tells her players.

How does the young coach deal with a tough loss? “I’m probably the hardest critic on myself. If we lose, I look at myself. I know there are outside doubters, but whatever someone else is expecting of me, I can tell you I expect ten times more.”